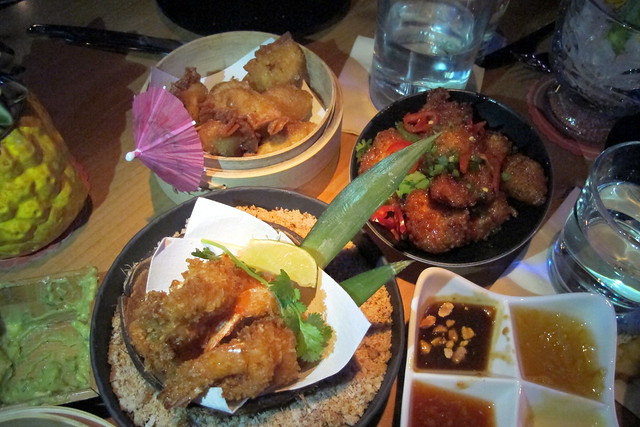 If you’re feeling extra festive this holiday season, you may want to try one of the wacky and wonderful Test Kitchen ideas from Charles Phoenix, the “Ambassador of Americana” who promotes fantastic vintage kitsch through books, tours and slideshows. (He also had the honor of riding on the City of Downey’s tiki float in last year’s Rose Parade.) His “food-crafting” projects include the Astro Weenie Christmas Tree (as seen on Conan O’Brien) and the Cherpumple (a cherry, pumpkin and apple pie takeoff on the turducken).

Last year I vowed that we would attempt to make Frosty the Cheeseball Man. This “jolly, happy soul” is made of Velveeta cheese with a layer of cream cheese “snow,” plus olive and bell pepper accoutrements. I named him Tiny Tim because he couldn’t stand up without being propped up by a pretzel stick crutch.

…Frosty the Snowman
Knew the [electric skillet] was hot that day

For a Thanksgiving-themed Test Kitchen project a few years back, Charles Phoenix made a Tiki Turkey Dinner complete with a Moai meatloaf centerpiece, Hawaiian bread stuffing, and coconut curry green bean casserole. Maybe next year we should throw a holiday luau!

In this requisite annual post I present to you more of the myriad reasons why I love the LA County Fair. Among them are taking photographs of the ferris wheel at sunset, eating strange fried food and finding random tiki sightings.

Chicken Charlie is famous for serving up deep-fried delights, but this year he introduced a new stand called The Pineapple Express that offered some island-inspired options that were promoted as healthier than your typical fare fair.

One of these was the “Naked Shrimp” ($11.95) with white rice and pineapple chunks, served in half a pineapple shell. If you’re concerned this dish sounds too healthy, don’t worry, they also give you a side of melted butter! The shrimp looked like they might have some spice, but were pretty bland. I appreciated the novelty presentation, but we’ll skip this next year.

On the other hand, the deep-fried lobster on a stick ($12.87) was juicy inside and the crisp coating had great seasoning.

Of course, Chicken Charlie couldn’t stray too far from his roots so there was also deep-fried Spam and deep-fried pineapple rings with chocolate sauce (both $6.44) to continue the Hawaiian theme. Not surprisingly, the latter wasn’t very good. I guess the deep-fried Klondike Bar shall remain my all-time favorite.

Even though we went at the end of September, the weather was still hotter than it had any business being. We paused to cool off with some shave ice at The Big “Kone” Huna, which I think might have been a new food vendor at the LA County Fair this year.

Their stand had a thatch roof, some tiki masks and bamboo poles, but also hot rod flames, disco lights and dance music, so that was a bit odd. As was their logo with a surfin’ dude in a scary-looking tiki mask. Yikes.

We couldn’t decide what flavors to get so we went with their suggestion of strawberry and pina colada “Hawaiian style” with sweetened condensed milk on top ($5.06). It was pretty good, though I kept stealing spoonfuls from our friends’ order of lime and margarita.

Every year we make sure to visit the arts and crafts building. We speculate on the fierce rivalry among the jam and preserves makers, and examine the prize-winning baked goods slowly decaying in the glass displays. There was no tiki cake this year, but there was this impressive cake for “It’s the Great Pumpkin, Charlie Brown.”

We’re also slightly obsessed with the tablescaping contest where people decorate tables according to themes, complete with elaborate centerpieces and menus for an imaginary meal. (Part of our fascination has to do with the nitpicky critiques from the judges, like “Teaspoon near knife is a questionable decision.”)

Of course this table caught my eye! It was inspired by James Michener’s book Hawaii, and featured a thatch roof over the table, woven palm frond placemats, monkey pod wood dishes, mini tiki torches, fake tropical flowers and tiki salt and pepper shakers. The Hairpin has some great pictures of some of the other tablescaping entries (including one for Game of Thrones!).