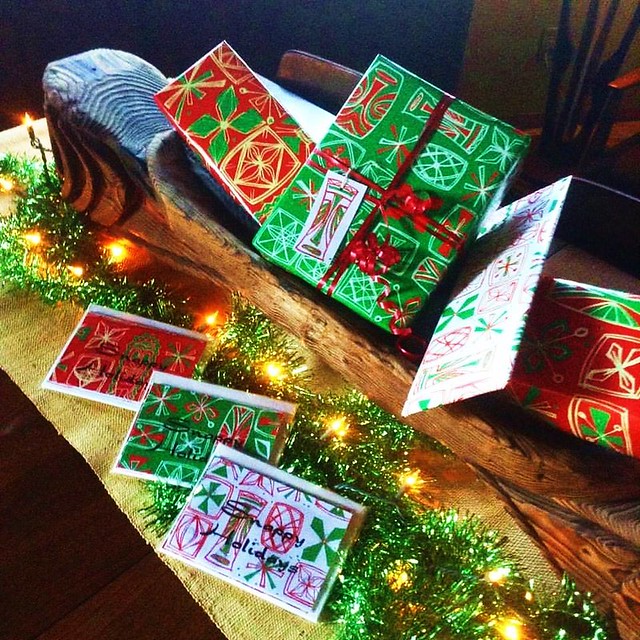 Now that Thanksgiving is done, it’s full speed ahead to the holidays. In this annual gift guide, I like to spotlight a few fun tiki finds from the last year or so. They’re fairly easy on the pocketbook, too, since they’re all $20 or less.

Seattle-based artist Dawn Frasier aka “Sophista-Tiki” brings some mid-century modern flair to the festive season with her “Snappy Holidays” cards and wrapping paper. In her Etsy shop, you can pick up a set of three cards plus a dozen gift tags for $6.50. Meanwhile, the matching gift wrap rolls ($15) in red, green and white can be found on Spoonflower. (Bonus: Spoonflower is offering free shipping just for Cyber Monday!) 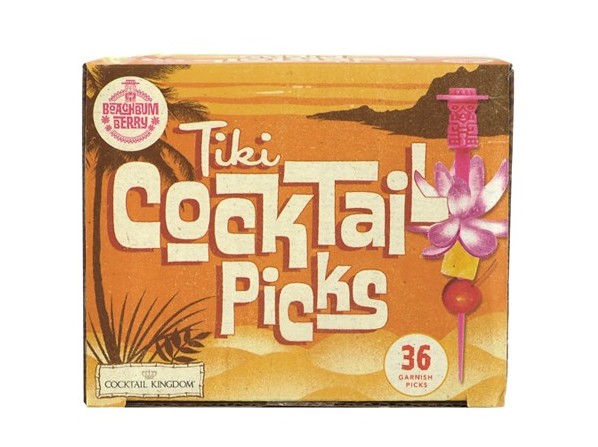 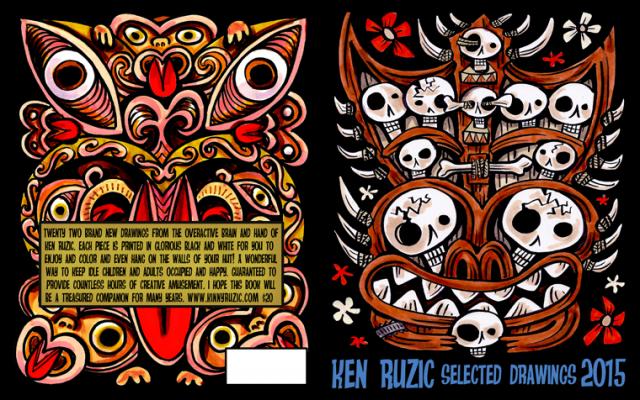 Coloring books are no longer just for the Crayola crowd. It seems like people of all ages are using them as a creative outlet and de-stressing tool. This coloring book from artist Ken Ruzic presents 22 black-and-white drawings adapted from his tiki art, including the inspiration for a piece from Tiki Farm’s 15th anniversary exhibition. It’s for sale for $20 from Wacko / Soap Plant / La Luz de Jesus Gallery’s website. 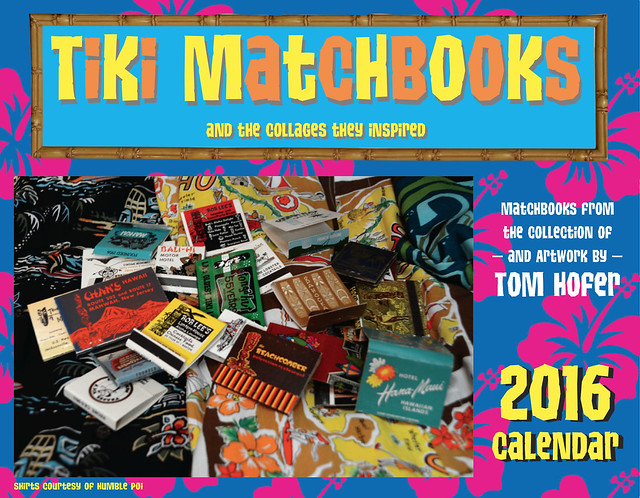 Tom Hofer creates paper collages designed to look like giant vintage matchbooks. (Bootlegger Tiki in Palm Springs has one up on the wall.) For the past few years, he’s offered “Tiki Matchbooks” calendars featuring his art along with dozens of images of the matchbooks that inspired him. The 2016 version is available on his web site for $15, including shipping (or two for $25). 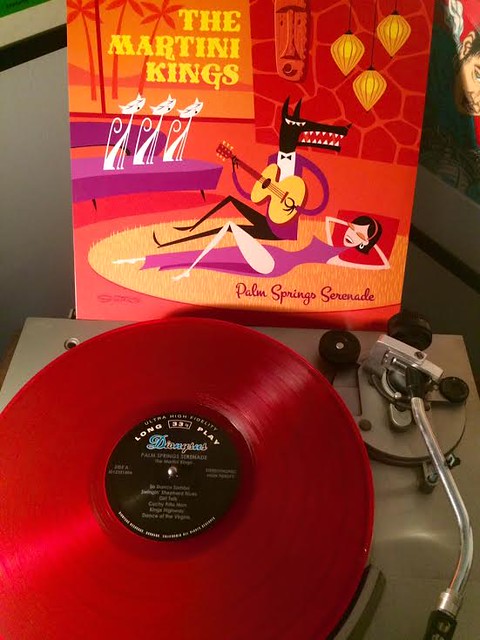 Everything seems to be red and green this time of year, so why not your vinyl, too? Dionysus Records recently released the final run of The Martini Kings’ “Palm Springs Serenade” album, this time pressed on red 180 gram vinyl. Featuring a cover illustration by Shag, the album is a compilation of the combo’s favorite jazz-lounge-exotica tracks from their CD releases. You can order the LP for $17.95 (including a digital download code) at Dionysus Records’ website. 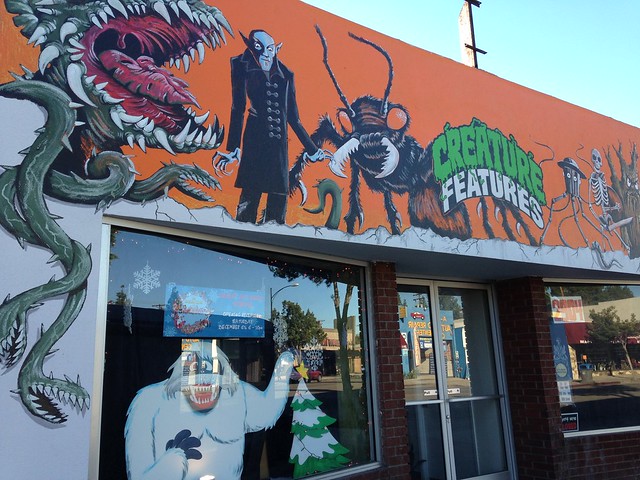 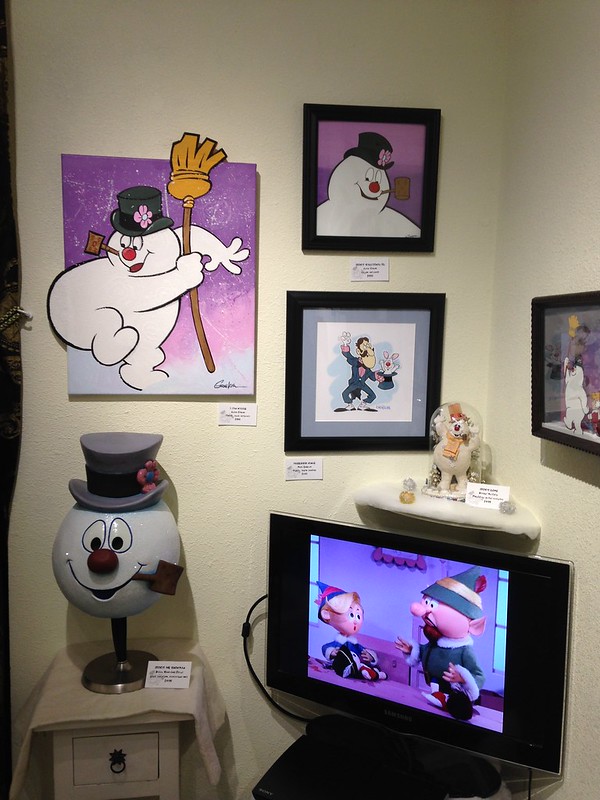 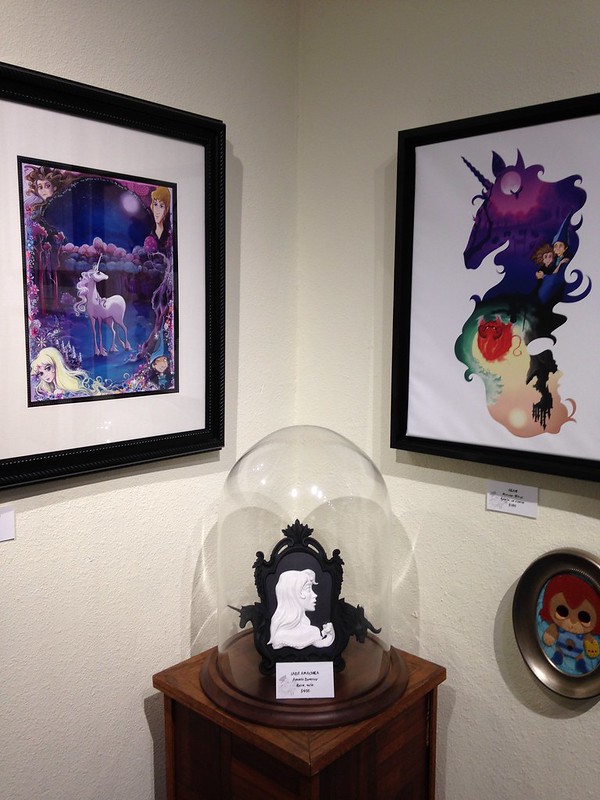 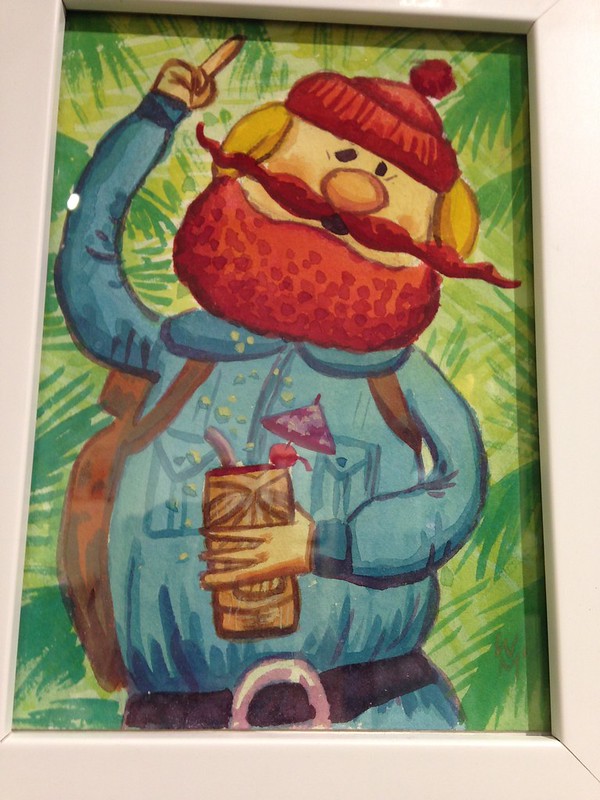 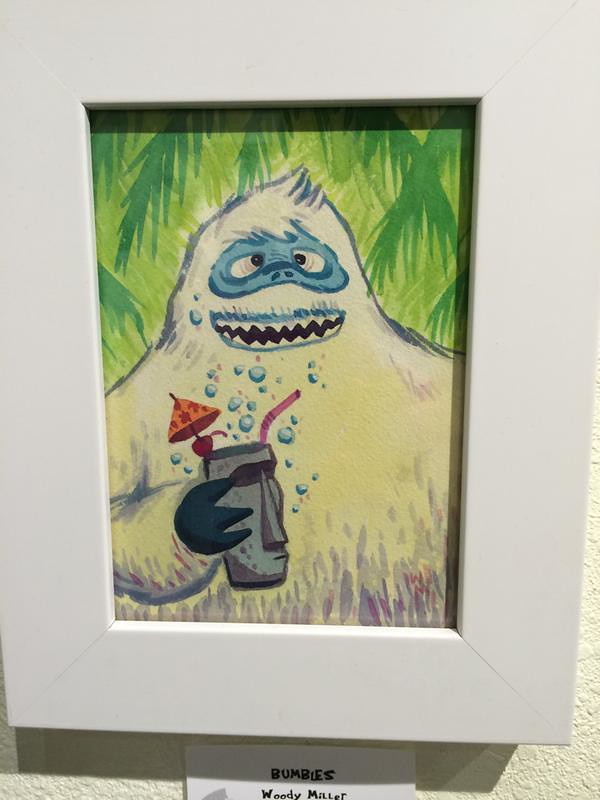 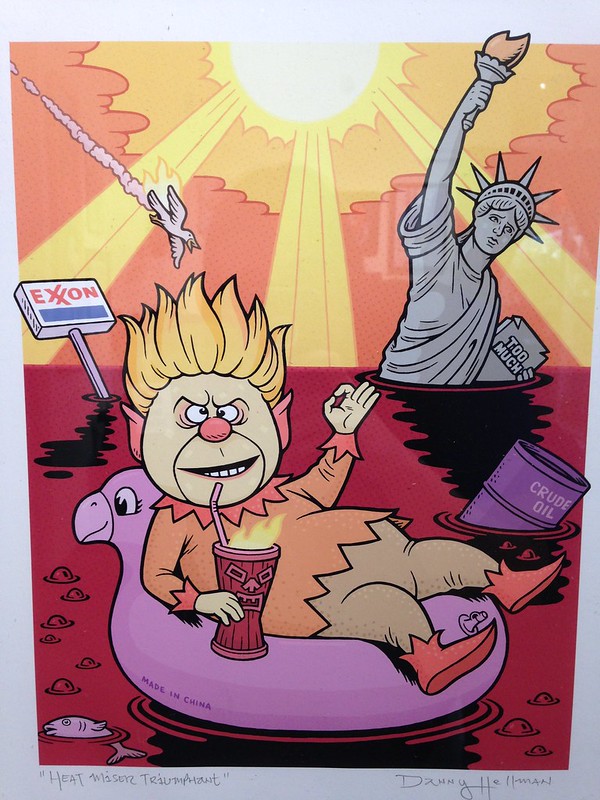 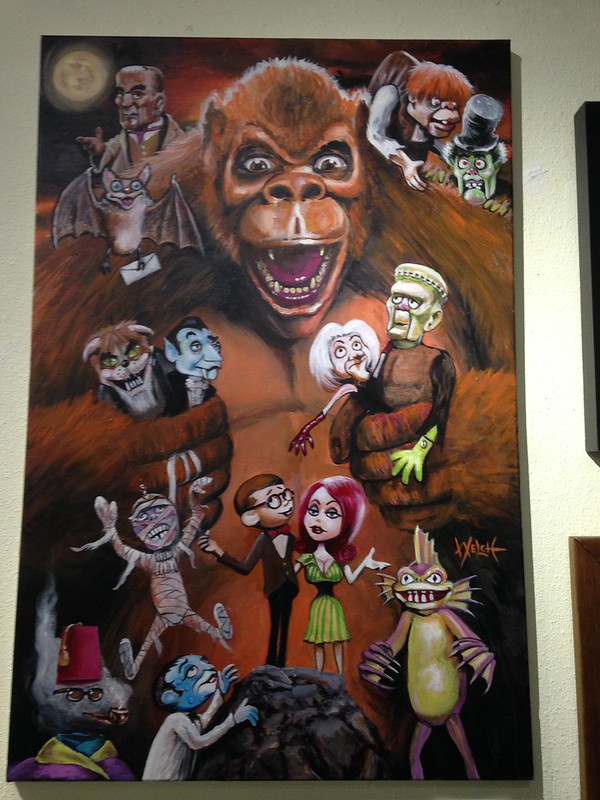 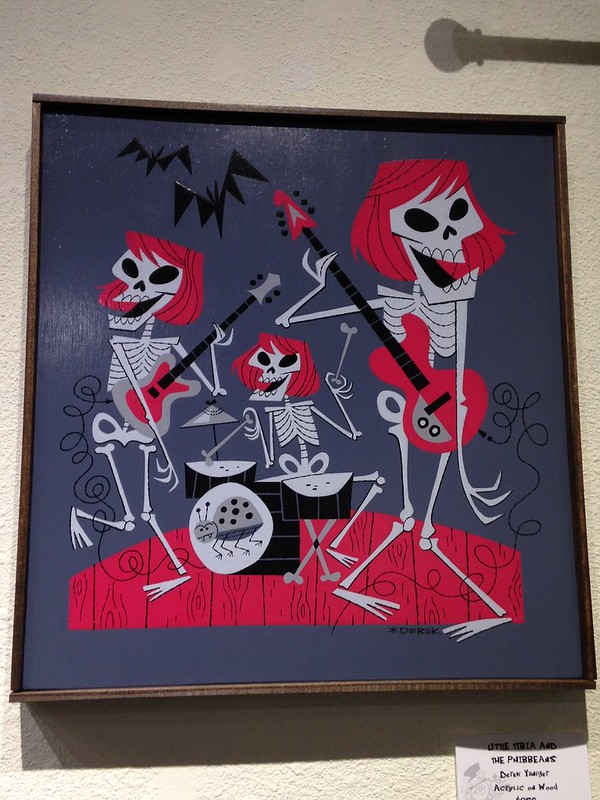 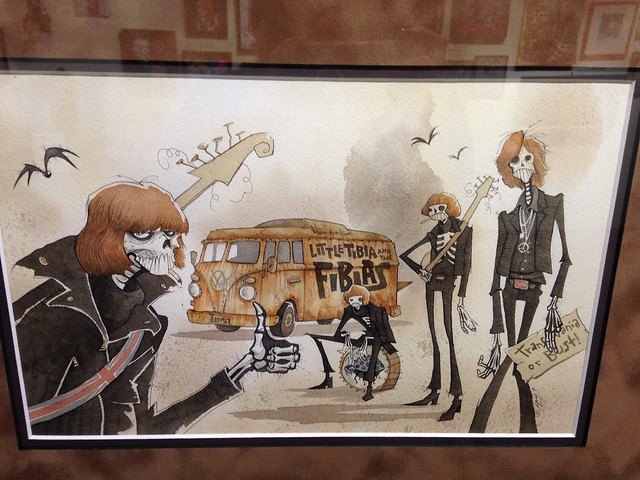 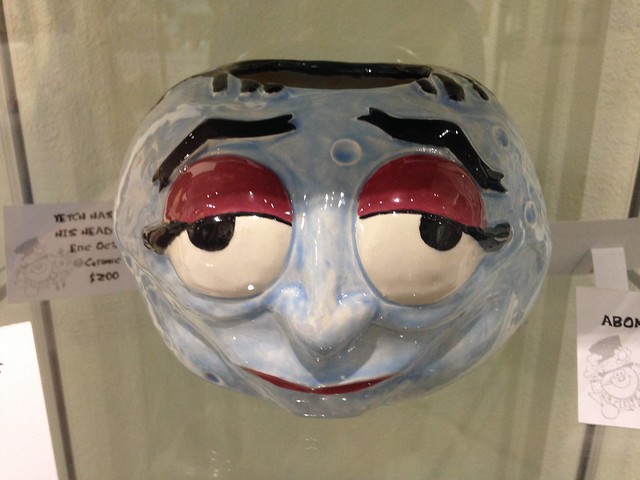 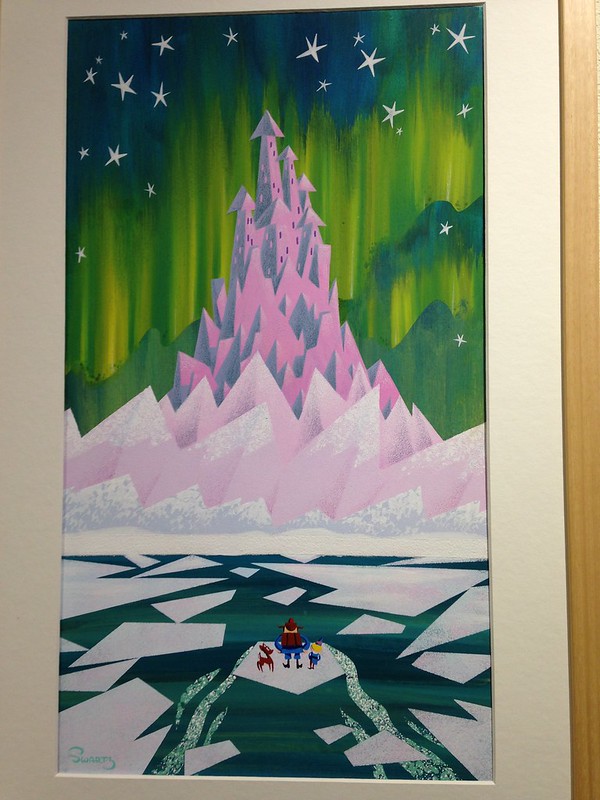 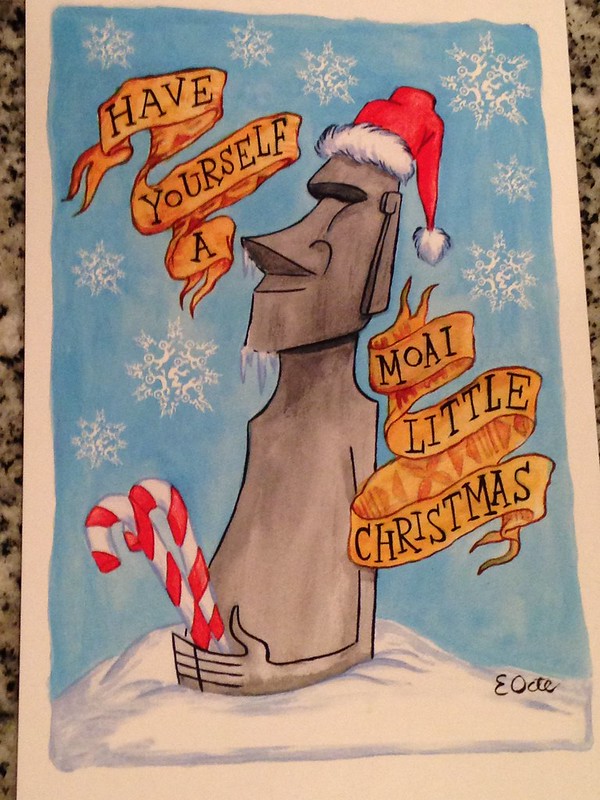 Let’s make this Monday a little merrier, shall we? Last weekend at Tonga Hut‘s Tiki Wonderland event, I picked up these jolly postcards by Eric October — “Have Yourself a Moai Little Christmas,” get it? I’d like to spread a little holiday cheer by sending some well wishes on one of these cards to the first 15 people to comment on this post. (I’ll e-mail you for a mailing address.) UPDATE: All the cards have been spoken for — mahalo for playing, everyone!

If you have a suggestion for some festive music, I’d love to hear! (My favorites of the moment include “Skating” by the Vince Guaraldi Trio from “A Charlie Brown Christmas,” The Beatles-infused “Rudolph the Red Nosed Reindeer” from The Ventures’ Christmas Album, and Ixtahuele’s exotica version of “White Christmas.”)

Also, if you happen to be in the Los Angeles area, you can see more art by Eric October at The Enchanted World of Rankin/Bass group tribute art show at Creature Features in Burbank. (A bunch of familiar tiki artists like Derek Yaniger and BigToe are participating too.) It’s on display at the store through January 4, 2015, and you can also see some photos of the art on the event’s Facebook page.