(Click on the names below to read the full review) 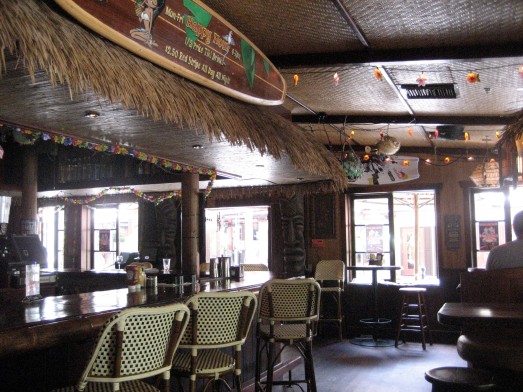 Thatched bar at Waitiki in Orlando

Tambu Lounge, Disney World – This lounge next to ‘Ohana restaurant is famous for its Lapu Lapu drink served in a pineapple.

Tiki fountains near The Enchanted Tiki Room at Disney World

Other Tiki Things in Orlando:

The Enchanted Tiki Room, Disney World – For about a decade, the tiki room had been “under new management” with the addition of Iago from “Aladdin” and Zazu from “The Lion King,” but after a fire at the attraction, Disney World restored the show to its original version.

Disney’s Polynesian Village Resort, Orlando – One of the premier hotels at Disney World, The Poly encompasses the Great Ceremonial House (aka the lobby, which now features an impressive display of fish float lanterns), “village longhouses” for accommodations, and a sandy beach.

Boutiki at Disney World’s Polynesian Resort – Aside from a few ugly tikis for decoration, this is a great gift shop with a bunch of merchandise tailored to the Polynesian Resort, like prints, mugs and t-shirts.