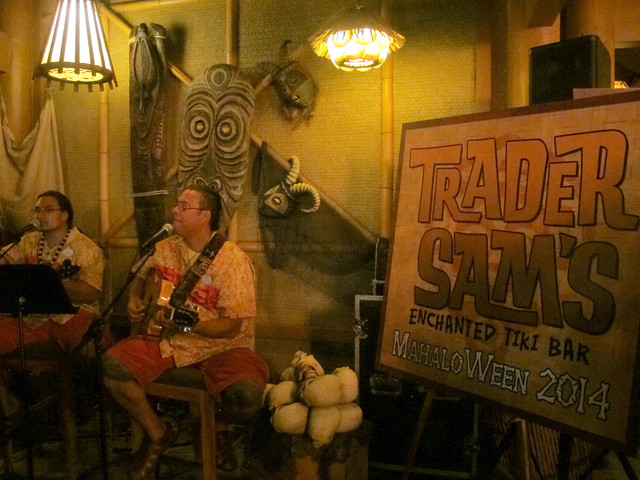 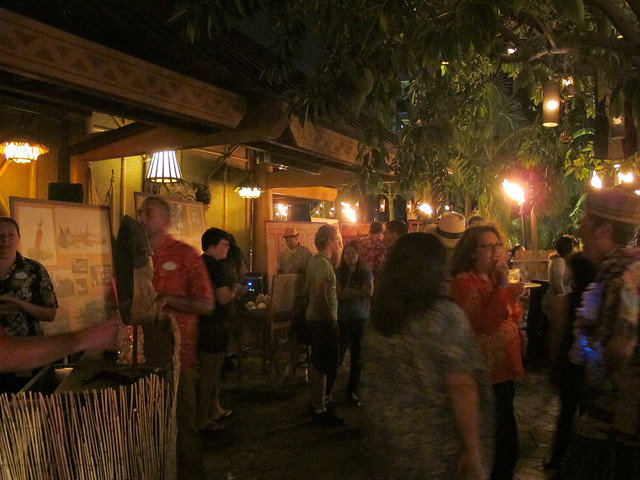 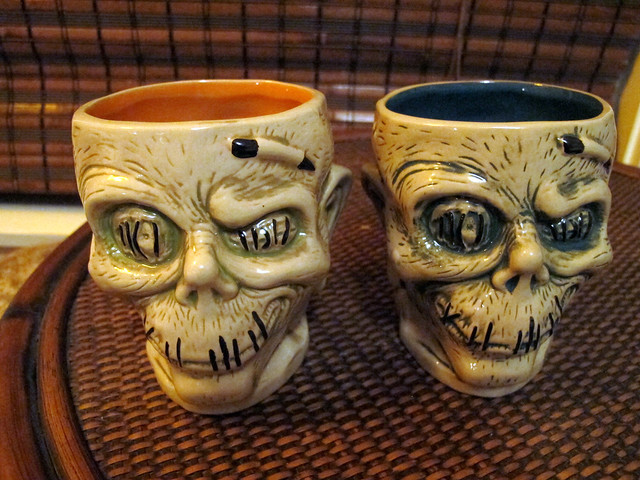 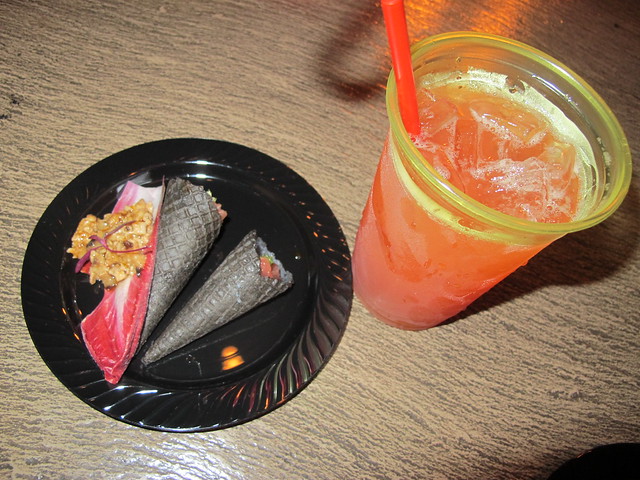 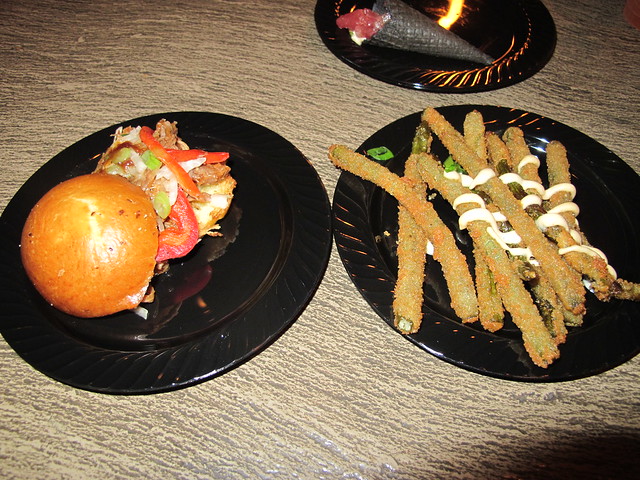 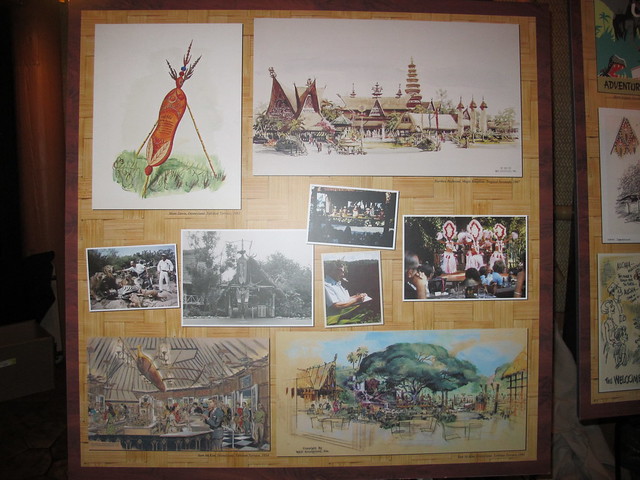 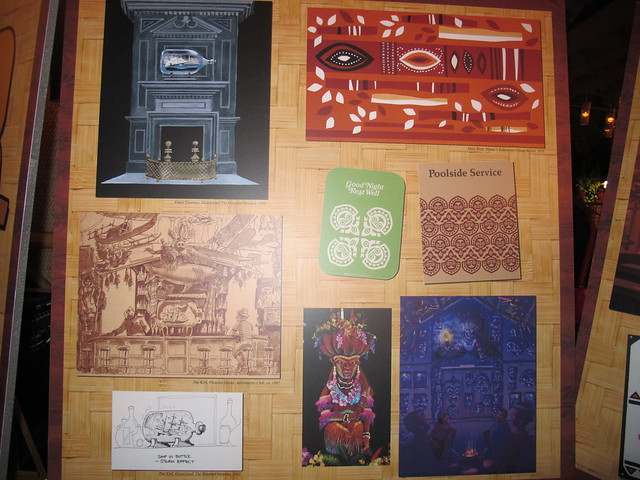 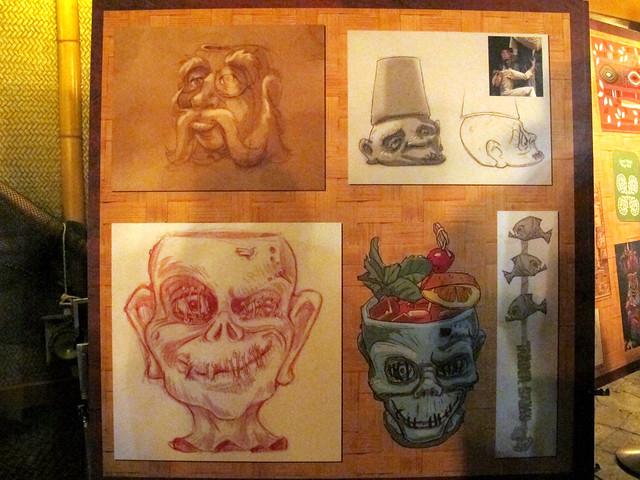 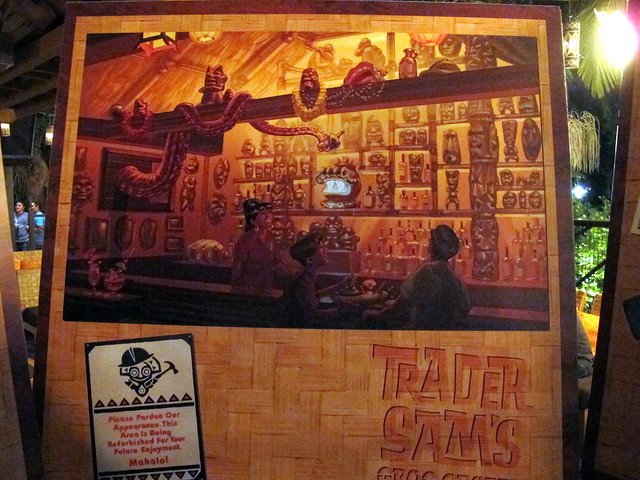 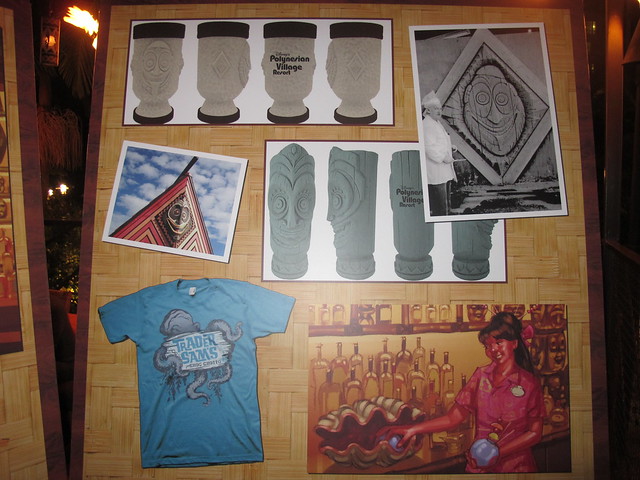 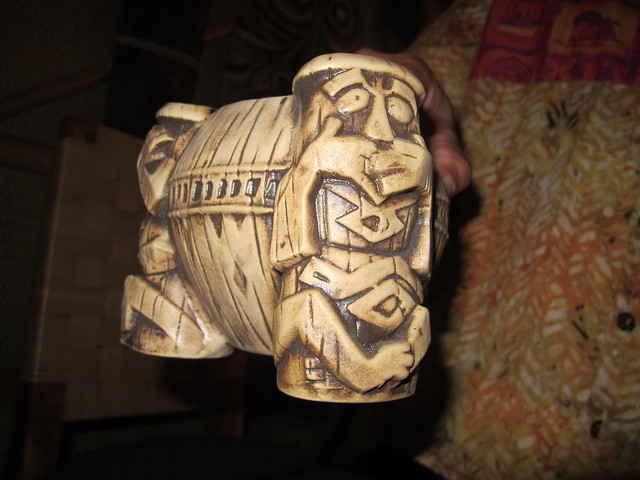 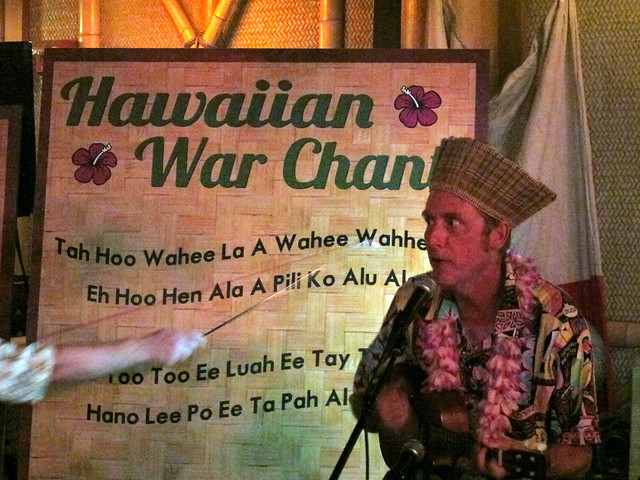 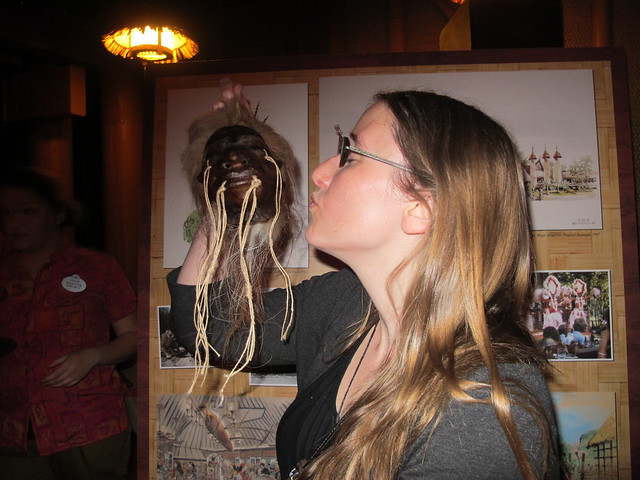 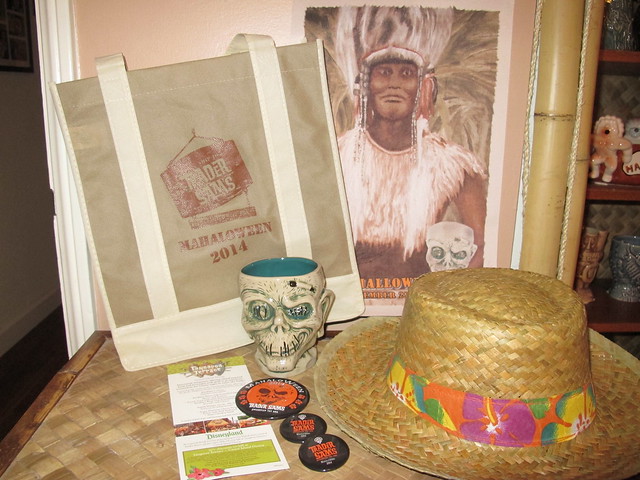 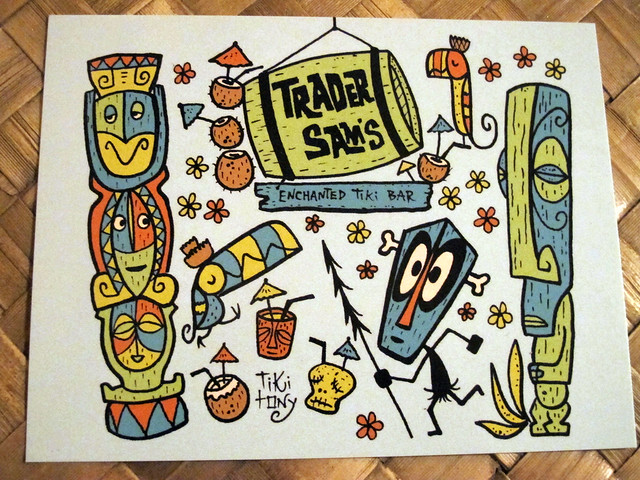 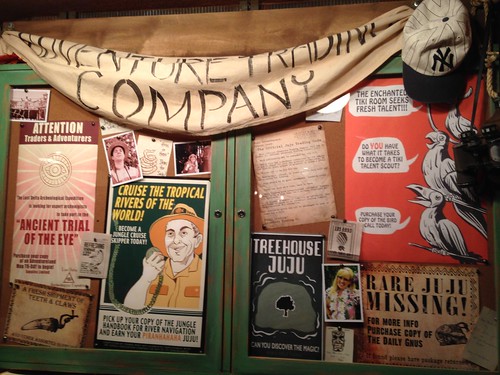 I was way late to the party on this, but since the beginning of August Disneyland had been doing a special promotion called Adventureland Trading Company at the Indiana Jones Adventure Outpost. It involved collecting “juju” charms by purchasing and solving puzzles or buying special food or drink items in that area of the park. 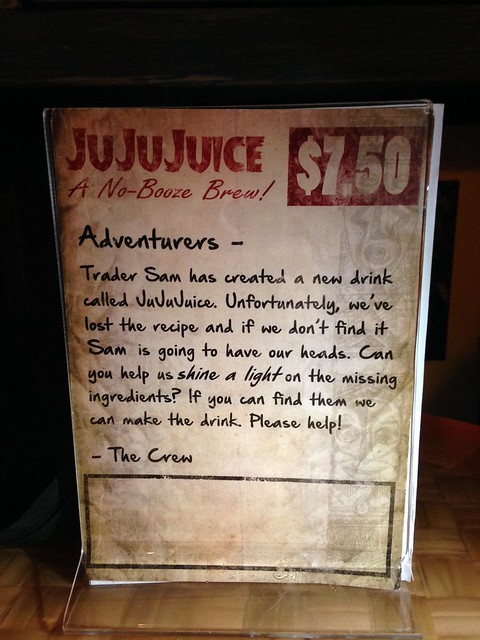 They had posted about it on the Disney Parks Blog, but we didn’t discover this was a thing until we found this mysterious mention of JuJuJuice ($7.50) at Trader Sam’s Enchanted Tiki Bar. 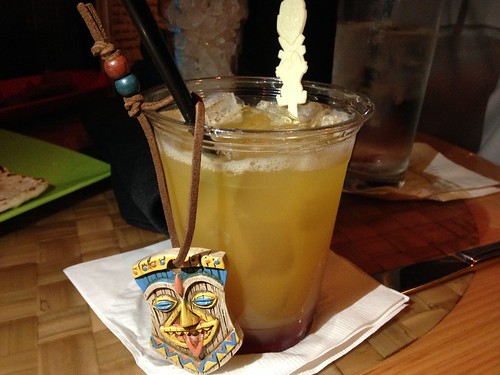 Once we figured out what the missing ingredients were — a skipper helped enlighten us — we were able to order this nonalcoholic concoction of pineapple, guava and other fruit juices. It came adorned with this tiki juju. 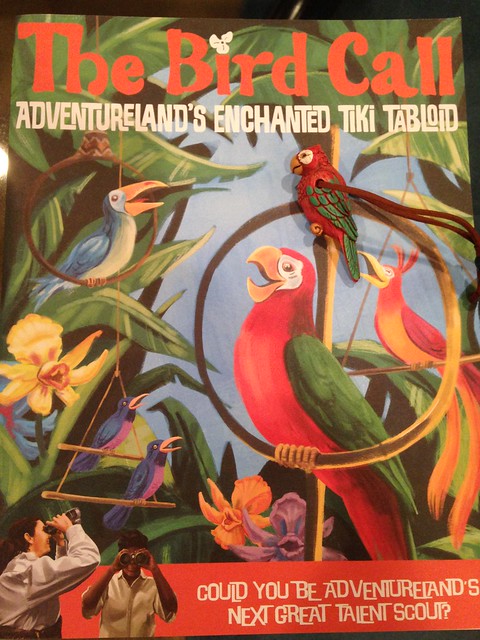 Another challenge involved “bird-watching” to get a red parrot juju from The Enchanted Tiki Room. The sad news is it sounds like Adventureland Trading Company has run out of supplies, however the resellers seem to be out in full force on ebay and Amazon, so all is not lost. Plus, this was such a popular promotion that perhaps Disney will bring it back in some form. (It happened with those Enchanted Tiki Room sipper cups!)

On the heels of summer’s Enchanted Tiki Room 50th Anniversary product release, Disneyland has come out with even more tiki art in the past few months. The following items were all still available in the WonderGround Gallery at Downtown Disney as of this past weekend when we visited.

In my previous post about the gallery, I highlighted Jerrod Maruyama and his “Hipster Mickey” art. He’s since followed up with a few companion pieces to it, including “Hanging at Sam’s” featuring Hipster Mickey and the logo for Trader Sam’s Tiki Bar and the Disneyland Hotel. (I wish he was sipping from one of their signature tiki mugs!) This made its debut in October and there are poster prints for sale plus postcards, magnets and canvas prints.

Highlighted as part of July’s Pop Fusion exhibit, “Mickey’s Enchanted Tiki Island” by Daniel Samakow features a vibrant sunset beach scene with Mickey Mouse, The Enchanted Tiki Room, Tangaroa tree and several Moai. According to the Disney Parks Blog, there are 50 tikis total in the image. I’ll take their word for it.

El Gato Gomez was recently profiled in Tiki magazine and I was pleased to see that her art has also been showcased here. I couldn’t help but pick up a print of her Enchanted Tiki Room painting (also available as a postcard), though it was difficult to decide considering she had also created beautiful depictions of the Haunted Mansion, Mad Tea Party and Space Mountain. (She has ordering information on her web site, if you’re interested.)

While it’s not tiki-related, “Mr. Toad’s New Mania” from September’s Pop Fusion exhibit also caught my eye with its steampunk sensibility. I’ve been a fan of Chris Reccardi since discovering his work in Palm Springs at M Modern Gallery and The Riviera hotel.