My family went to Disney World this summer and I thought the parks were great, of course, but I was almost more impressed by the resorts The Mouse has built to house his tourists. I love themed things, and the attention to detail given to each of the hotels is staggering—especially the Animal Kingdom Villas, the Grand Floridian Resort & Spa, and the TIKI-themed Polynesian Resort. 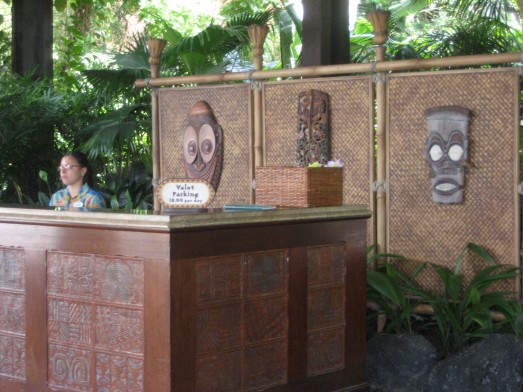 However, this is a “deluxe” resort and one of Disney’s most popular so rooms start at $355 per night! Needless to say, we stayed elsewhere but I had to make a trip out there to do some exploring. 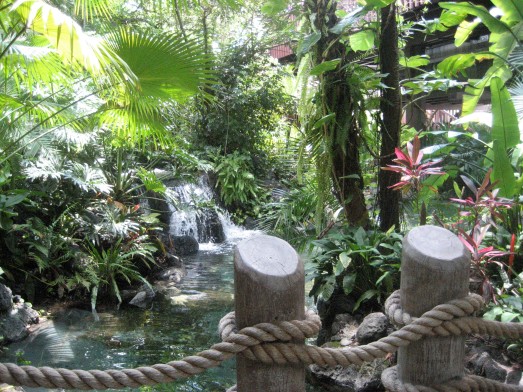 Once you enter the realm of Disney, you’re immediately transported from a concrete parking lot to a tropical paradise. Waterfalls, hibiscus and lush foliage surround the wooden bridge that takes you into the lobby.

I like all the bamboo in the lobby area. With all the greenery and openness of the main building, the resort looked and felt very Hawaiian to me. Guests even get orchid leis when they check in. 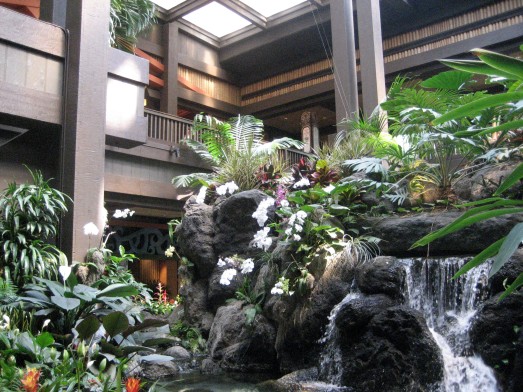 Their site says that the Great Ceremonial House is supposed to resemble a royal Tahitian assembly lodge and that there’s more than 75 kinds of plantlife in this oasis they have going on in the atrium. You have to appreciate how Disney can go all out! 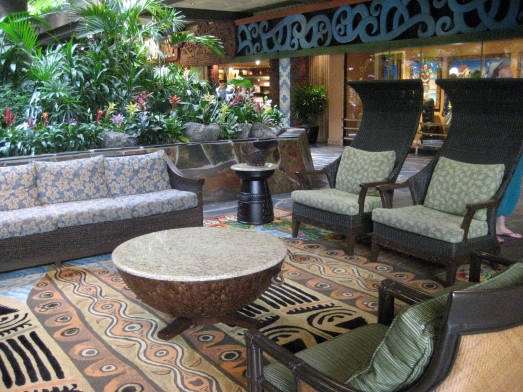 You can’t really see here, but there are “hidden” Mickeys designed into the pattern of the rug. In the background you can see the display window of their main store, the Bou-Tiki.

Surrounding this main building are nearly a dozen “village longhouses” where the actual hotel rooms are located. Each of the longhouses are named after Polynesian islands (Rapa Nui, Hawaii, etc.) and feature a unique design with those red, brown and orange colors straight out of the seventies.

Though that shouldn’t be surprising considering the Polynesian Resort opened back in 1971 as one of Disney World’s first on-site hotels.

Among the tiki statues we found while wandering the grounds was Rongo, who may look familiar to you from Disneyland’s Enchanted Tiki Room.

Near the pool is a beach area with hammocks that were just too tempting not to lounge in for a bit. Hammocks are definitely a plus in my book.

This spot is also supposed to be a good place to watch the fireworks over Cinderella’s Castle at the Magic Kingdom park across the lake. (Swimming in the Seven Seas Lagoon is forbidden…alligators, perhaps? This is Florida, after all.) 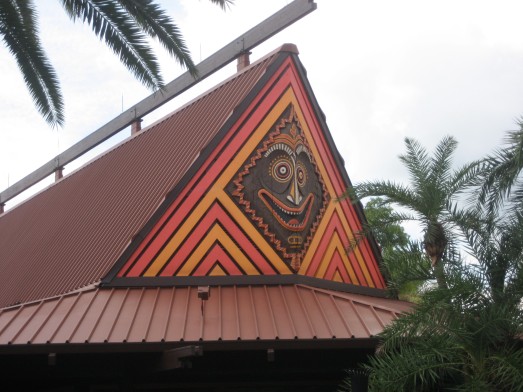 EDITOR’S NOTE: Disney’s Polynesian Village Resort is undergoing extensive renovations in 2014, so consider this a time capsule. For the latest updates, you should check out Tikiman’s Unofficial Polynesian Resort Pages