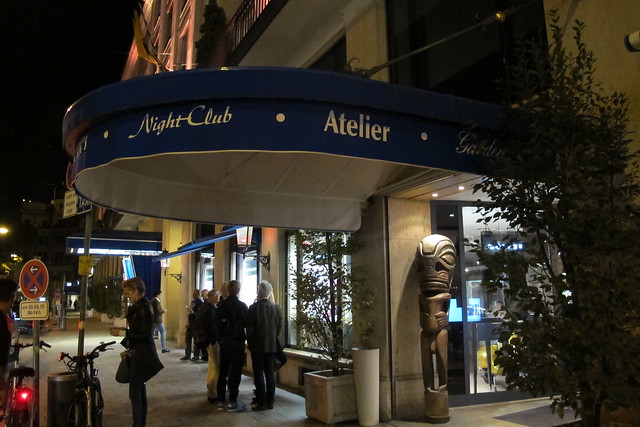 Our little tiki tour of Germany started in Nuremberg with Kon Tiki and Die Blume von Hawaii, and concluded a little farther south into Bavaria with Trader Vic’s Munich. During the 1950s, ’60s and ’70s, “Trader Vic” Bergeron ramped up the expansion of his eponymous Polynesian-themed restaurants. However, of the more than 20 locations from its mid-century heyday, only a handful of those original establishments are still around today. Trader Vic’s London, which opened in 1963, is the oldest operating branch, followed by Trader Vic’s Munich, which made its debut in 1971. 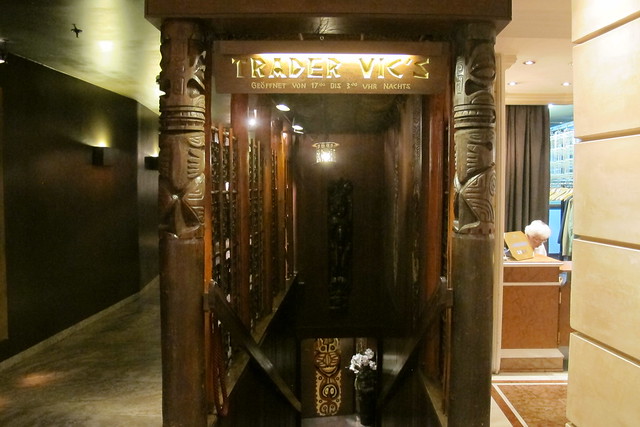 This is the only Trader Vic’s location left in Germany (or continental Europe, for that matter), since the closures of Trader Vic’s Berlin (2003-2009) and Trader Vic’s Hamburg (1990-2013). The restaurant is located in the basement of the Bayerischer Hof, an historic hotel that’s a favorite of politicians and celebrities. To the right of the main hotel doors is a blue awning underneath which a Marquesan tiki stands sentry. 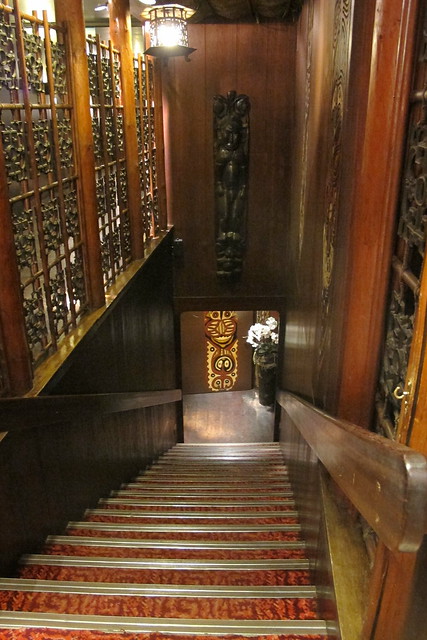 This entrance leads straight to the staircase descending into this subterranean tiki retreat. It’s flanked by carved tiki poles and decorative metal tiles. (If we’re drawing comparisons, I’d say the tapa-covered spiral stairway of Trader Vic’s London may be more impressive, but Trader Vic’s Munich has the edge when it comes to the rest of the decor.) 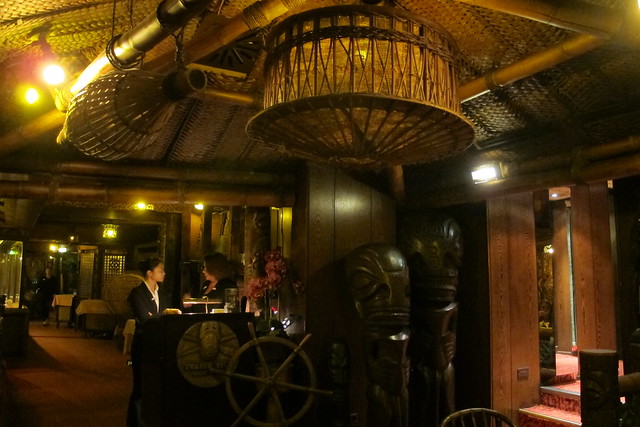 Here, you’ll be greeted by more tall tikis and the reception stand. Straight ahead is the bar and lounge area, while the various dining rooms are to the right. 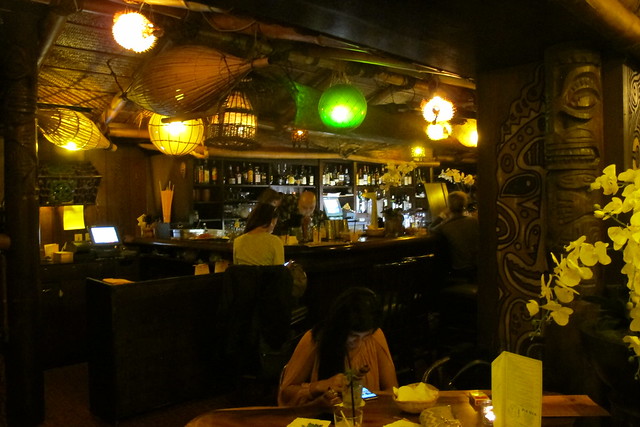 On a future visit, I’d try to snag one of the small tables in the bar area, since it’s in the middle of the action. It was a bit confusing to figure out where the lounge seating technically stops, but we were told that anything without a tablecloth is up for grabs. (We checked back here later in the evening and the whole section was full, so I’d recommend arriving on the early side.) 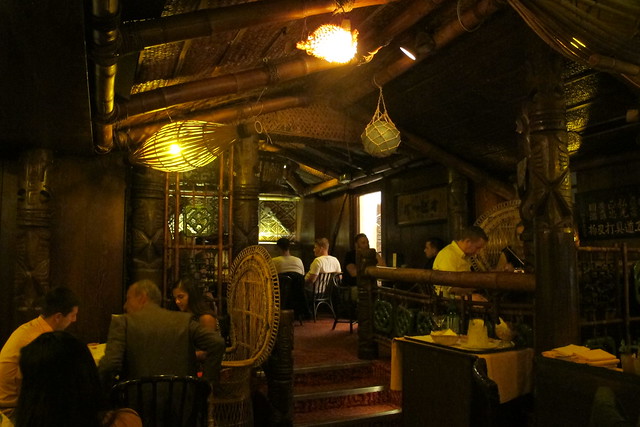 The space is a labyrinth of interconnecting rooms and it can be difficult to get your bearings, especially if you’ve had a few Mai Tais. But who wouldn’t want to get lost in these gorgeous surroundings? 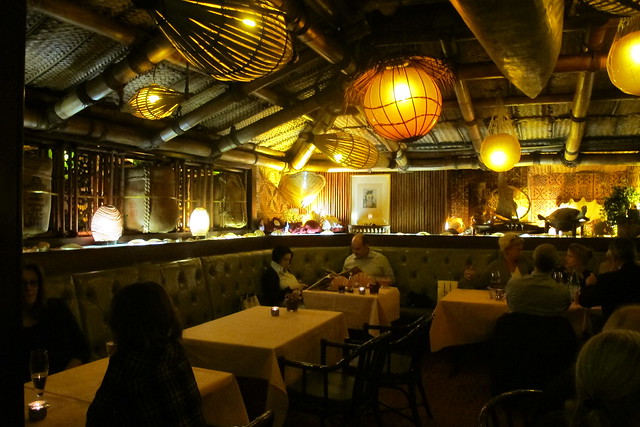 The bamboo and woven matting ceilings are laden with glowing glass fish floats, outrigger canoes, pufferfish lamps and fish trap lanterns. Underneath this medley of textures and ambient lighting, diners are seated at rattan peacock chairs and green banquettes. 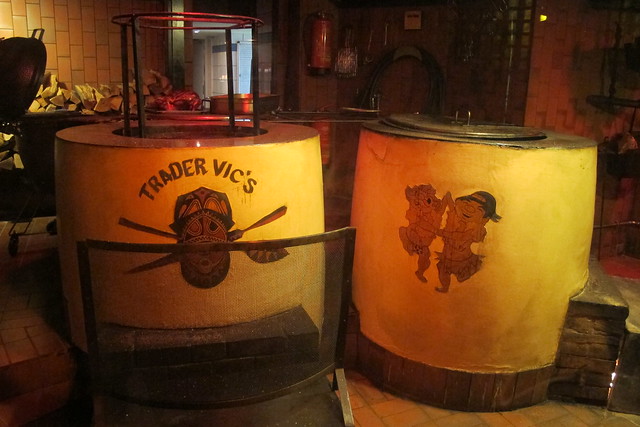 A glassed-in room houses the large wood-fired Chinese ovens, a signature of Trader Vic’s restaurants. A small sign describes (in German) that the temperature reaches nearly 500°C (around 900°F) and the oak imparts a subtle, smoky flavor to the meat that’s hung inside to cook. 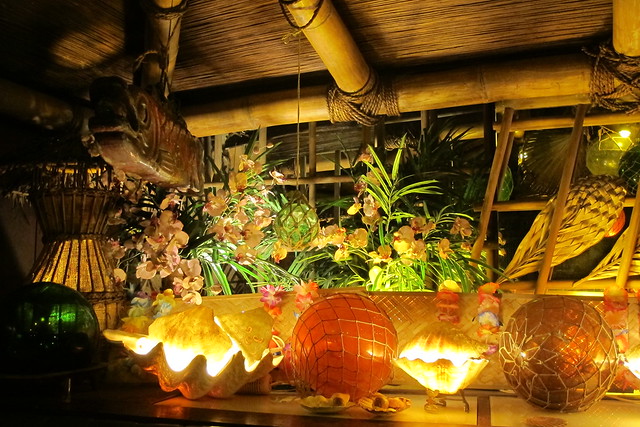 We were brought to a table in the farthest section of the restaurant, not too surprising since we hadn’t made reservations. (We had called earlier in the evening and were told it wasn’t necessary for that particular night.) Above our table there was a pretty little tableau of glass fish floats, shells and fake orchids and foliage. (Since we were in a semi-private alcove, I didn’t feel like I wasn’t making too much of a spectacle photographing the meal…) 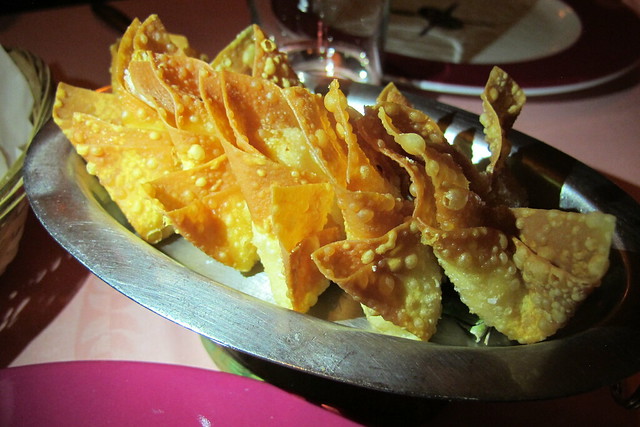 When you see the menu prices, you will remember you are in one of the fanciest hotels in Munich. Most of the main dishes are in the 30+ euro range, though there are a couple options for about 20 €. Of course, there are Trader Vic’s signatures like the cosmo tidbits platter, ham and cheese bings, bongo bongo soup, etc. Crab Rangoon (11,60 €) is one of my favorites so we had to start with that, especially since our German friend had never tried it before. 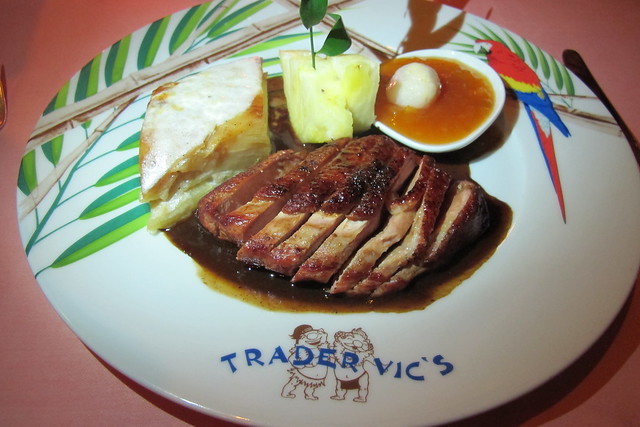 The menu seems much more extensive than what you’ll find at other remaining locations. (I noticed overlap from vintage menus from Trader Vic’s Beverly Hills.) It was a little overwhelming trying to decide on a main course from all the curries, continental fare (lobster Thermidor) and Chinese oven and wok specialties. I eventually settled on the barbecued duck breast with Polynesian spices, pineapple, mango chutney and Hawaiian potato gratin (30 €). (I don’t know what was supposed to be Hawaiian about it, but it was tasty.) 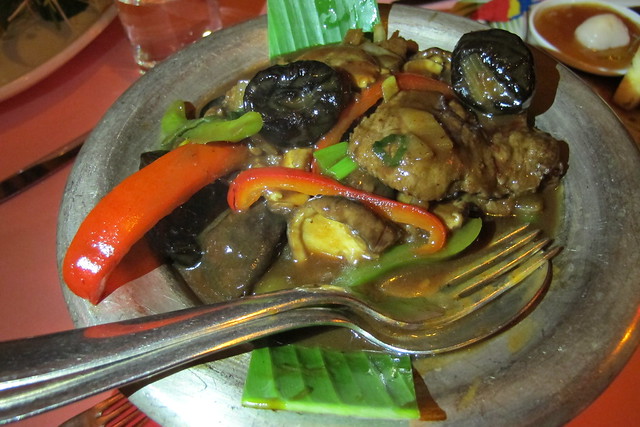 Our friend chose one of the chef’s specials, which was wok-fried kangaroo with ginger, prunes, shiitake mushrooms, sugar peas and scallions (24,50 €). He wanted to take the opportunity to try a more “exotic” meat than the pork that’s so plentiful in Germany. 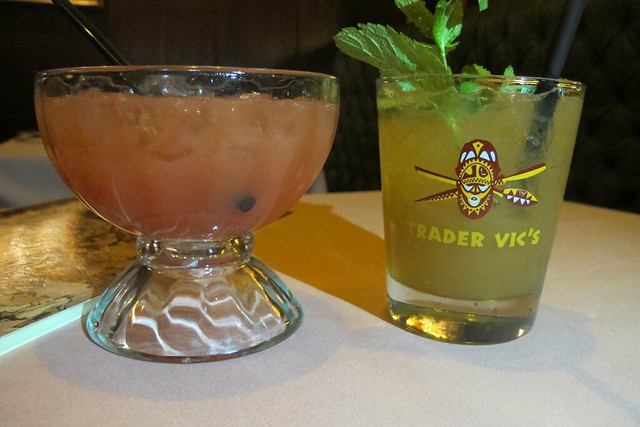 You’ll find all the classic Trader Vic’s cocktails, naturally, plus the Munich Sour. (The server told us it’s just like the London Sour, but with Cognac instead of Scotch.) I went for the Tiki Puka Puka (16,90 €), while our friend selected the Suffering Bastard (12,30 €) intrigued by the novelty of the name. The drinks were potent, to be sure, but could use a little more finesse. Thankfully, the fantastic setting helps one overlook any flaws. 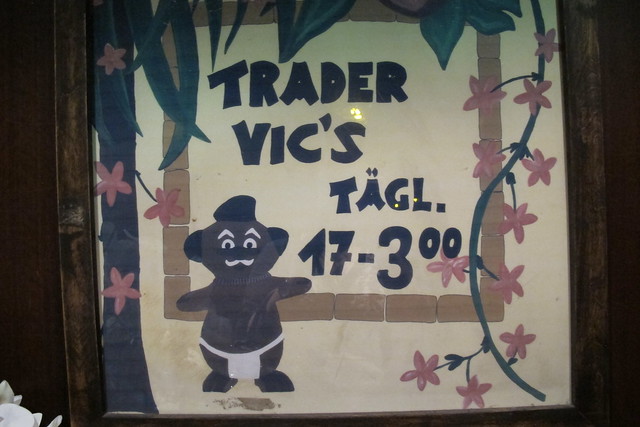 If you’re traveling through Germany, be sure to take a momentary detour from the beer gardens and stop in for a Mai Tai at Trader Vic’s Munich. This treasure is like stepping into a tiki time capsule. It’s central and not far from the Marienplatz, Frauenkirche and other sightseeing attractions. As this menehune in the sign helpfully points out, Trader Vic’s is open every day from 5 p.m.-3 a.m.