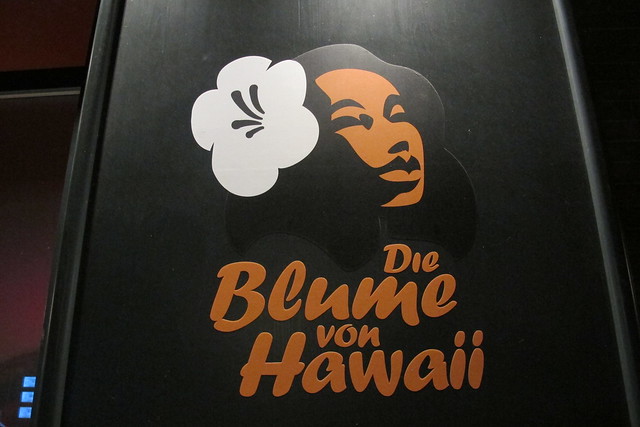 Nuremberg in Germany has two tiki bars that are both worth visiting — and it’s not that difficult to go to both in the same night if you are short on time. (The tricky part would be avoiding a hangover the next day.) Kon-Tiki Cocktail Bar & Restaurant is an expansive establishment with faux-tropical décor and a few decades under its belt, while Die Blume von Hawaii is a compact newcomer with mid-century modern style and topnotch tiki drinks. 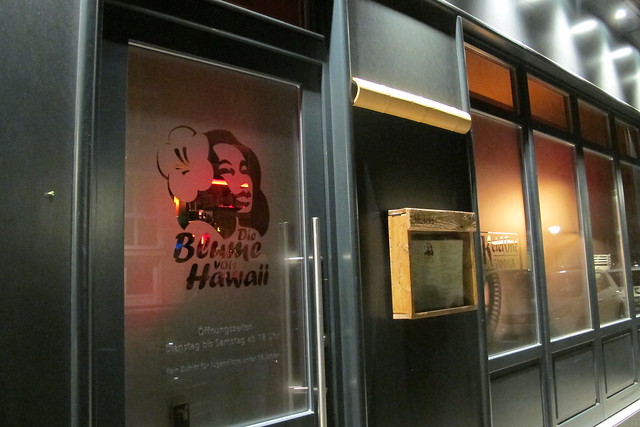 Die Blume von Hawaii opened in March 2014 and it’s essentially a one-man show from Zack Koma Stingl, a Nuremberg local who honed his skills at Bar Europa. The black façade is so subtle that I thought we’d gotten lost until I saw the logo on the frosted glass and realized we were standing right in front of the door. 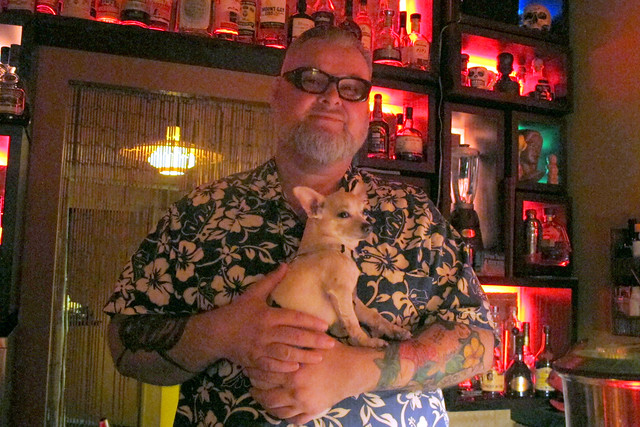 Zack gets the stamp of approval from renowned mixologist/author Jeff “Beachbum” Berry (Latitude 29, New Orleans). He’s quoted on the back of the menu: “My good friend Zack Koma Stingl is the living embodiment of the tiki spirit. If you don’t believe me, ask to see his tattoos.” (Indeed, one of them is the Trader Vic’s logo Abelam mask.) It was great fun to talk tiki with Zack, and also to meet his little furry friend Paul, aka Emperor Palpatine. 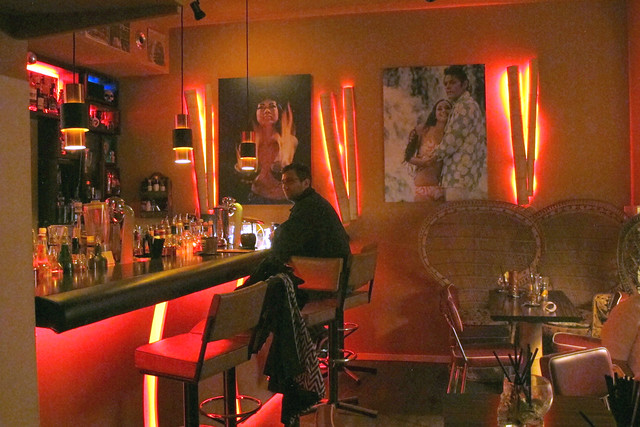 The space is on the small side, with five seats at the bar and some stools along the side wall, plus a few clusters of bamboo tables, peacock chairs and red vinyl chairs in the middle. When we visited on a Wednesday, there were a couple groups of young people partying like it was Saturday night. (We stuck around until after they left so I could snap a photo of the room.) 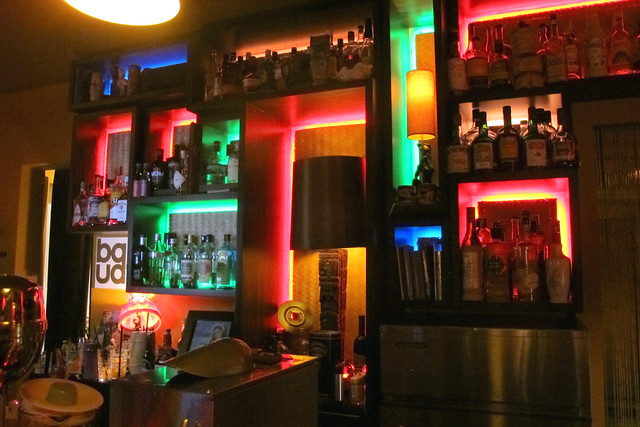 Behind the bar are segmented shelves backlit in red, blue and green. Among the liquor bottles you’ll spot some tiki mugs and vintage finds, like a Marwal hibiscus girl bust. Direct your gaze still higher and you’ll notice a line of exotica albums up on the wall. 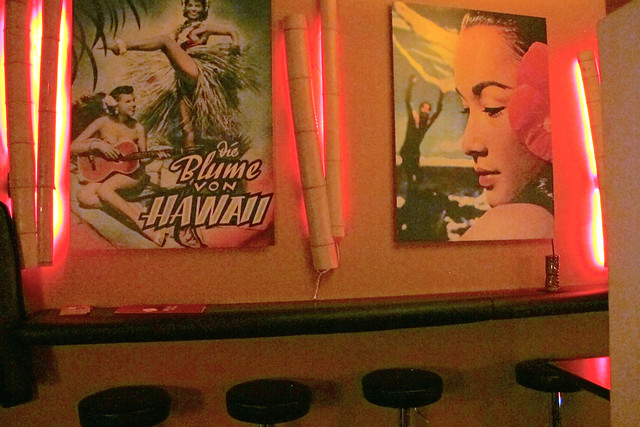 Other decorations include a Moai perched on a ledge to the left of the bar, plus atomic-style light fixtures, bamboo and a poster from the 1953 film “Die Blume von Hawaii,” an adapatation of the 1931 German operetta very loosely inspired by Queen Lili’uokalani. 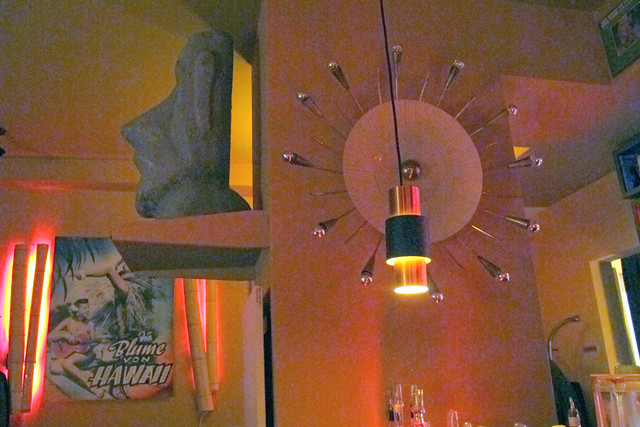 Zack is also a DJ and he put together a fun, eclectic mix that suits the neo-tiki setting. Annette Funicello’s “Pineapple Princess” chimes in along with German 50s/60s tunes and interesting covers of the James Bond theme and “Hooray for Hollywood.” 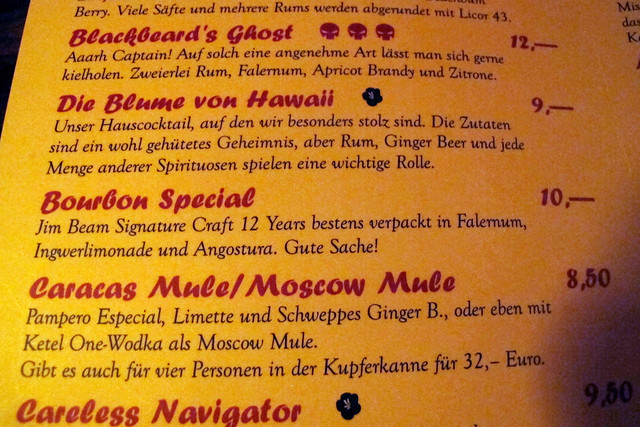 There are around 30 drinks on the menu, which Zack updates three or four times a year. Black flowers label his 11 original creations, which are listed alongside tiki classics (Zombie 1950, Missionary’s Downfall) and a few favorites from Beachbum Berry (Blackbeard’s Ghost, Beachbum’s Own). Meanwhile, skulls (ranging from one to five) warn of the particularly potent potables. The deadliest of all appears to be The Undertaker, served in a glass skull complete with fiery garnishes (see last photo). Most of the cocktail names happen to be in English, but the descriptions and ingredients are in German — thankfully, rum is still “rum,” so what else do you really need? 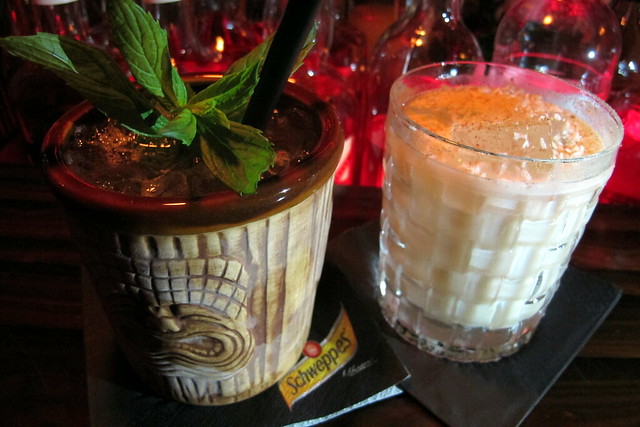 The bar’s signature drink, Die Blume von Hawaii (9€), won a German rum recipe competition that had Beachbum Berry on the judging panel. I’m normally not a fan of drinks mixed with ginger beer, since it can overshadow the other flavors, but this was perfectly balanced and absolutely delicious. Mr. Hockey opted for the Old Fashioned Voo Doo (9,50€), combining soursop with rum, milk and apricot brandy, topped with nutmeg and grated coconut. 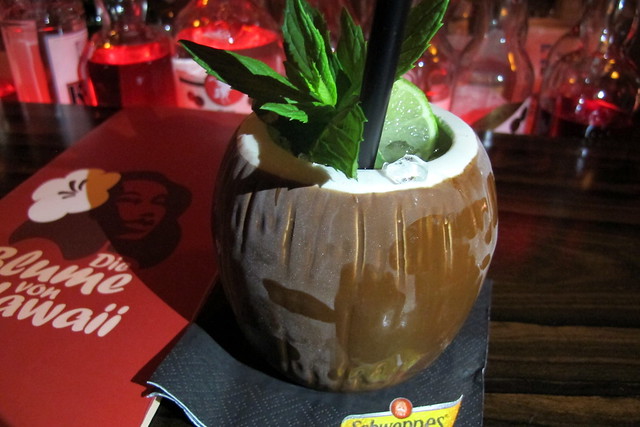 We asked Zack for a recommendation and he suggested the Aranui (10€), his riff on the Mai Tai but with coconut rum. This was also fabulous. (Purists need not worry as he also offers Trader Vic’s original Mai Tai.) 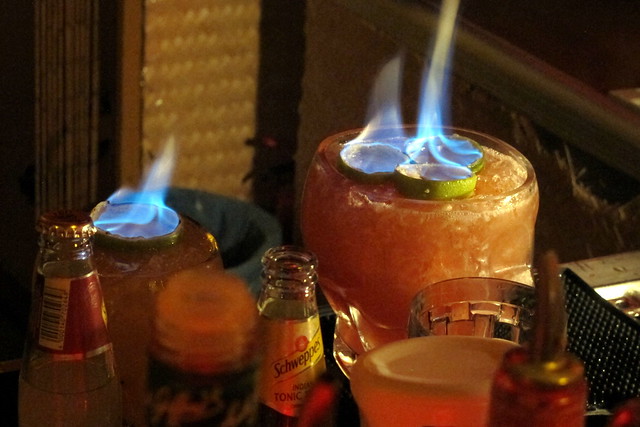 Nuremberg is only a one-hour train trip from Munich, so you’re missing out if you’re traveling in Bavaria and don’t make it to Die Blume von Hawaii for some of the best tiki drinks in Europe. The bar is open Tuesday through Saturday from 6 p.m.