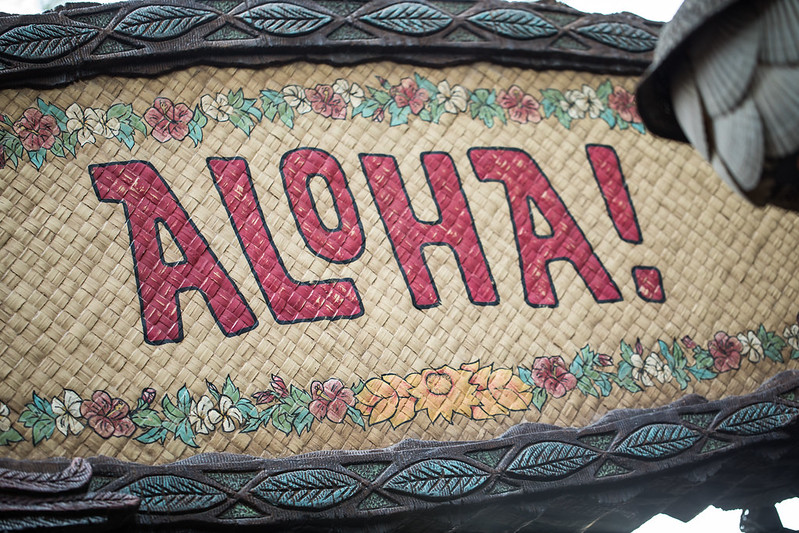 Aloha! Why so much radio silence on the blog lately? Over the summer, Mr. Hockey/Baseball popped the question and we spent the last several months planning a wedding… The Tiki Chick is now Mrs. Hockey/Baseball! 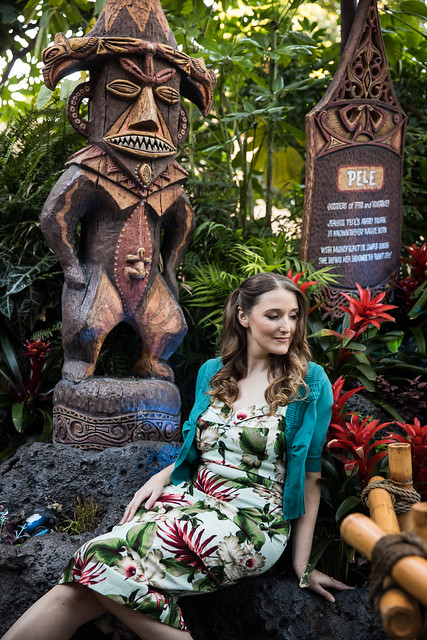 To the surprise of many of our friends, we did not have a tiki wedding. (The newlyweds from Modern Tiki Lounge can show you that’s done, though!) However, our fantastic wedding photographers, D. Park Photography, also happen to specialize in engagement photo shoots at Disneyland. So, of course, I couldn’t resist the chance to get some snaps taken at the Enchanted Tiki Room. 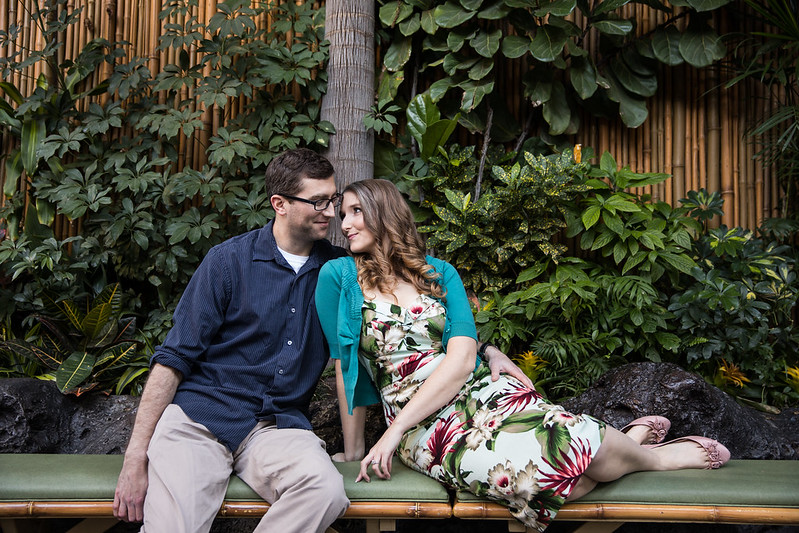 The photos gave me the opportunity to wear my tropical floral printed dress from Stop Staring! — it was a print created exclusively for Unique Vintage in Burbank. Pure Beauty by Danielle got me all dolled up for the occasion. 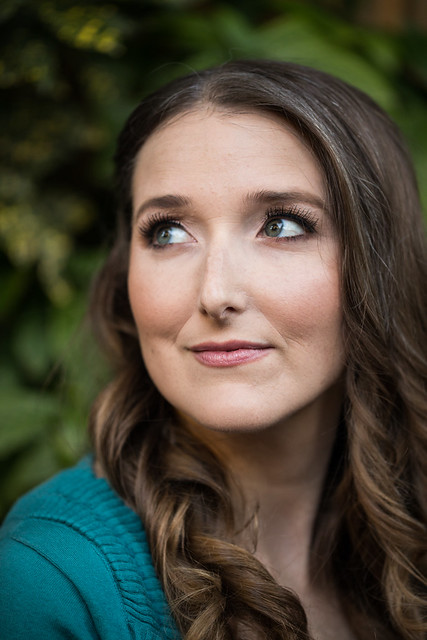 The shoot was back in January, during the wettest winter Southern California had experienced in years. I think it had been raining the whole week leading up to this day, but we lucked out with sunshine! 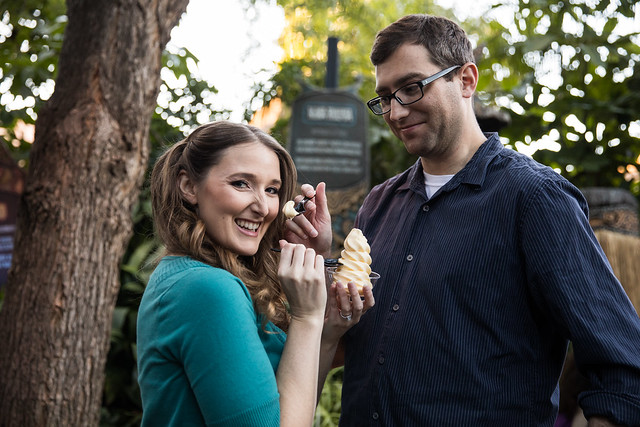 What’s a visit to the Enchanted Tiki Room without Dole Whip? The mischievous Mr. Hockey dabbed some on my nose! (Thankfully, this was not foreshadowing to any cake smashing to the face at the wedding — it was all very civil.) 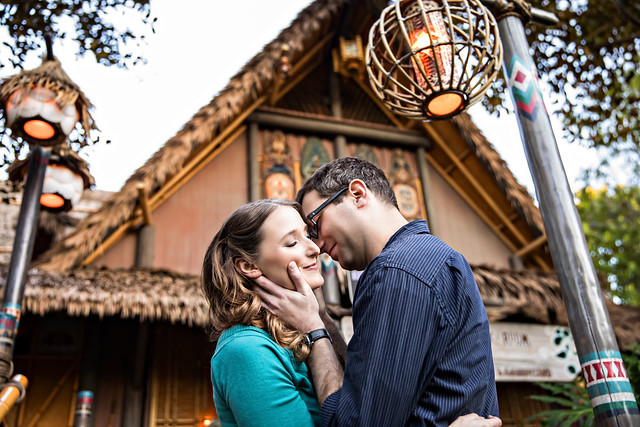 It was super crowded that day, but D. Park Photography is very adept at making it look like you’re secluded in your own little world at the Happiest Place on Earth. 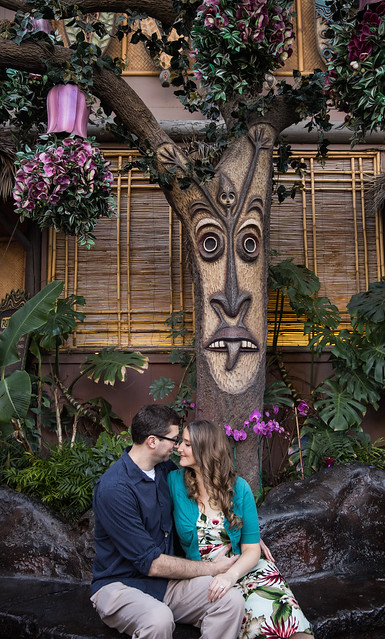 I couldn’t have been happier with how the photo shoot turned out. Drexelle and David of D. Park Photography are total pros and utter sweethearts, too! I need to get some of these photos framed to put on display in our home tiki room. 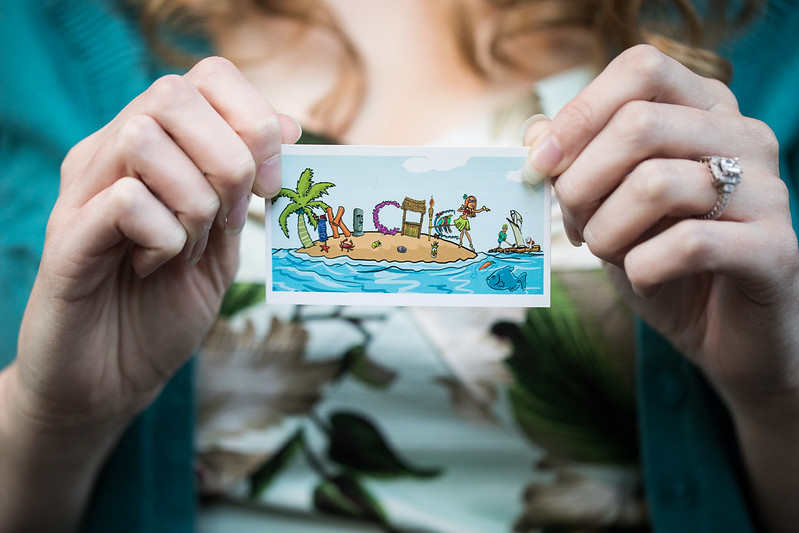 Happy New Year! Every year on January 1st (or January 2nd in this case), we go check out the post-parade viewing of the Tournament of Roses Parade in Pasadena. Two years ago I blogged about an under-the-sea themed float with a neat school of pufferfish, but this go-round there was a bonafide tiki float!

The City of Downey’s float was called “Enchanted Paradise” and it won the Founders’ Award, which is given to the most beautiful entry built by volunteers (as opposed to the professional float-building companies that make most of them).

I loved the flowers on the volcano, especially the garlands of orange mini orchids and the “lava” flowing down from the top. The audio tour said it was covered with sheet moss, Spanish moss and reindeer moss, and that the rest of the float had thousands of roses, anthuriums, carnations and ginger.

There was also a waterslide built into the volcano, but you couldn’t really see from the ground or even on the TV coverage, so I don’t really know what the point of it was. I guess it was fun for the people riding it…

All the floats have to be covered with natural materials, so this “cockatoo” was coated with white and yellow rose petals, and onion seed for the beak.

During the parade this tiki moved its arms, playing the drum. According to Stephanie Edwards on KTLA, the tikis were covered with bark, barley, mum, walnut and strawflower.

This sleepy-looking tiki was spewing out smoke during the parade. I love the “tiki torches” next to it — bamboo poles with whole pineapples, pink carnations and heliconia for fire.

One of the volunteers said that all the tropical flowers (i.e. not the roses or the mosses) had been flown in from Hawaii the previous week.

It’s interesting to me how they make something — like a palm tree — out of something else — corn husks and orchids. Palm fronds instead made it on to this tiki, giving it a cool texture.

I liked that the float designers “carved” tiki masks into the support poles of the hut, using squash seeds for some of the white details. That’s a pretty nice bamboo bar they have up there, too — only thing missing is the rum!

Riding on the float was the beauty queen Miss Downey and her entourage, a few local float association bigwigs, and author and retro slideshowist extraordinaire Charles Phoenix. (Someday I hope to try some of his kitschy Test Kitchen creations like Frosty the Cheeseball Man and the Astro Weenie Christmas Tree.)

In case you missed it on TV, you can see video of the City of Downey’s tiki float and all its moving parts on the KTLA web site (around the 2:45 mark). Milestone Products is also selling Rose Parade pins featuring the drumming tiki for $6. Check out more of my photos of the float over on Flickr.

It’s that time of year again: The Fair! (Actually, it’s the end of that time of year because it’s done on Sunday.) This marks the third installment (see part one & part two) of my annual ode to the LA County Fair.

Where else will us city folks get to see an adorable pile of piggies? 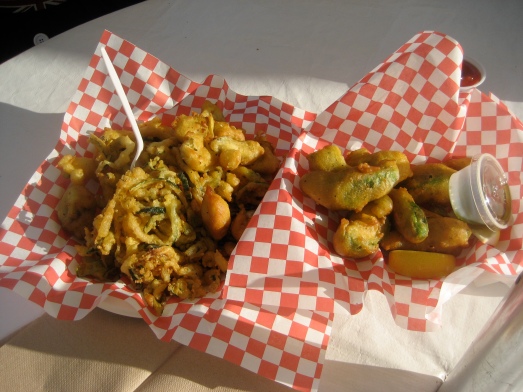 And get our daily servings of fruits and vegetables (in fried form?) That’s deep-fried zucchini strings, mushrooms, artichoke hearts and avocados here. 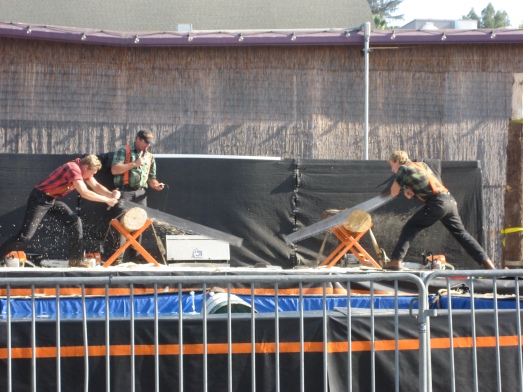 Or watch strapping young lumberjacks compete head to head? Maybe I need to start tuning in to timber sports on ESPN…

And then there’s always the tiki sightings! Like this snazzy fellow propped up to help sell (what else?) jacuzzis and barbecues.

New for this year was an “official” tiki lounge behind the Longboard Bar at the racetrack. However it was only for concert ticketholders so I wasn’t able to verify if there were any actual tikis in there. 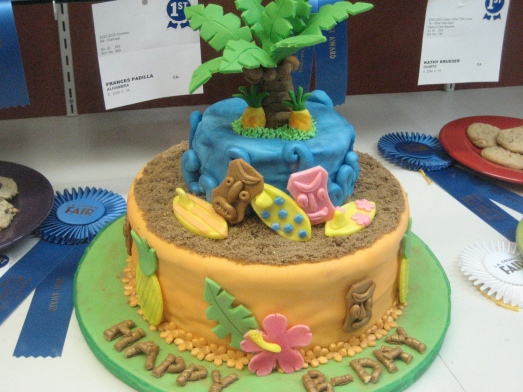 And just like last year, we actually stumbled upon yet another tiki cake in the arts & crafts building. I love the sugar sand! Good times all around.