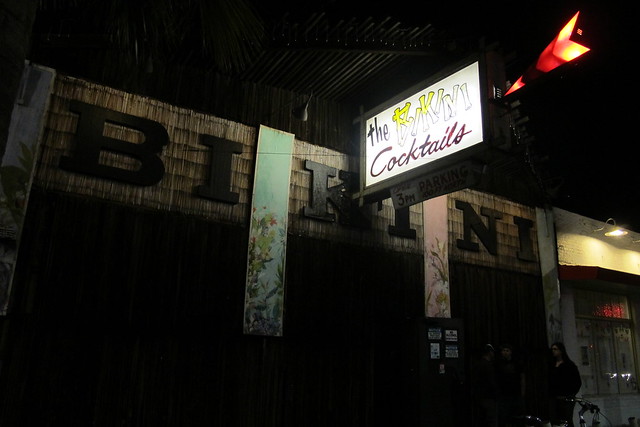 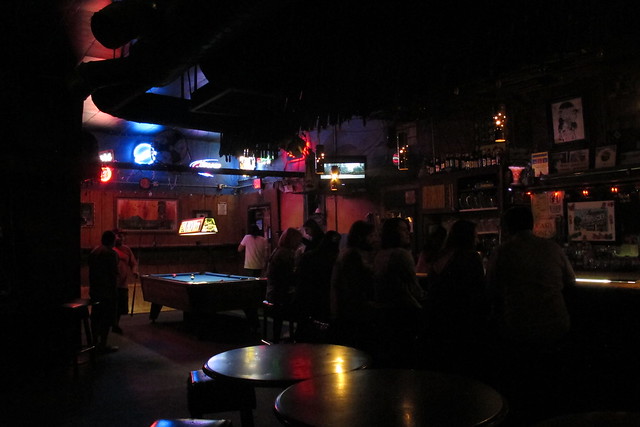 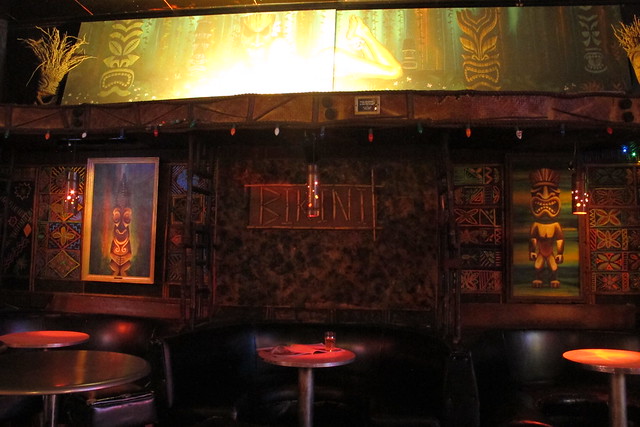 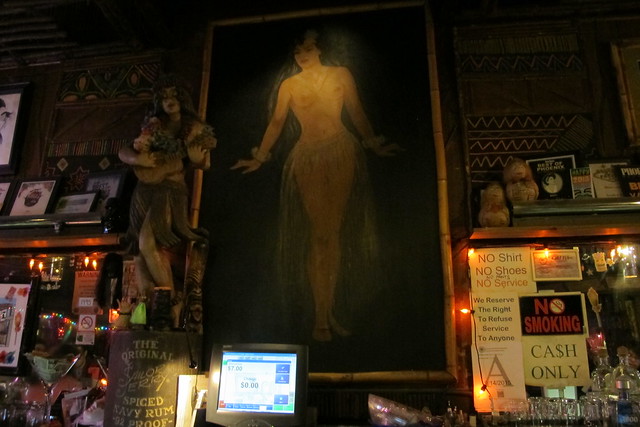 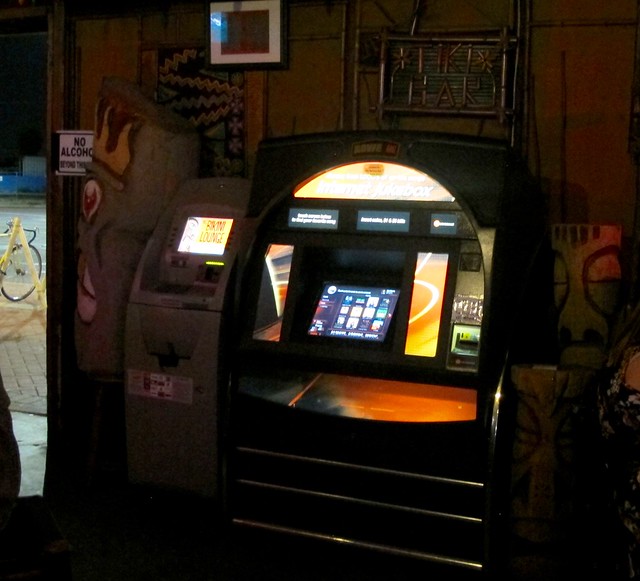 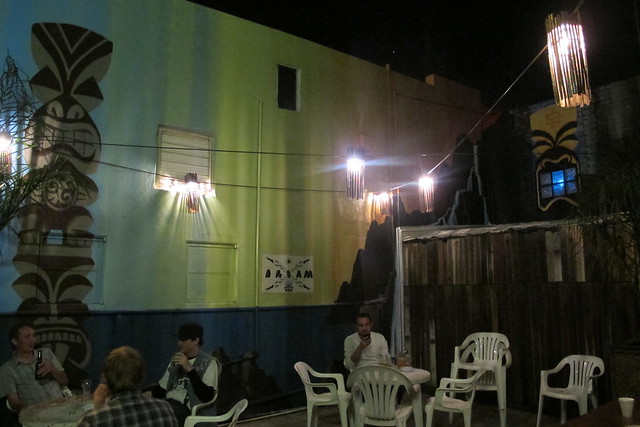 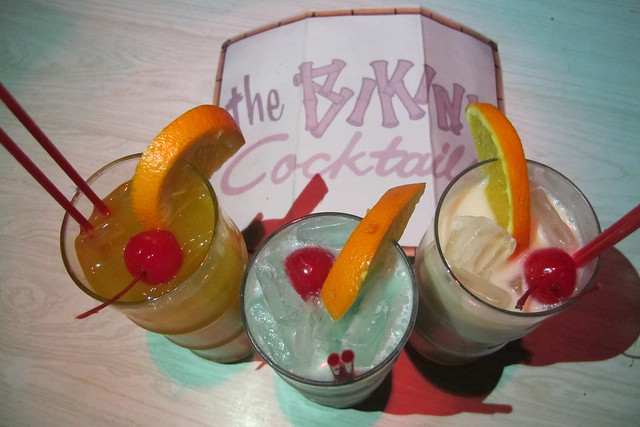 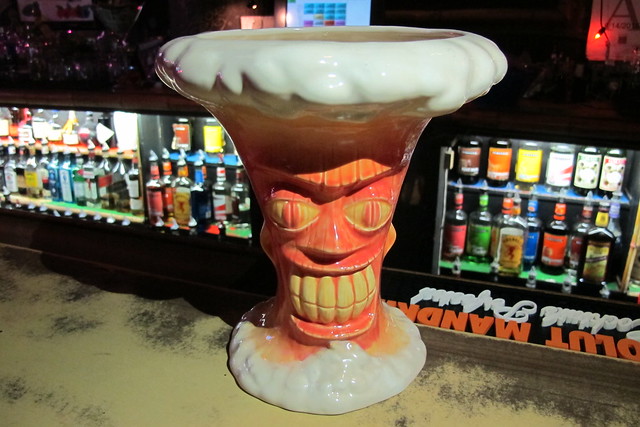 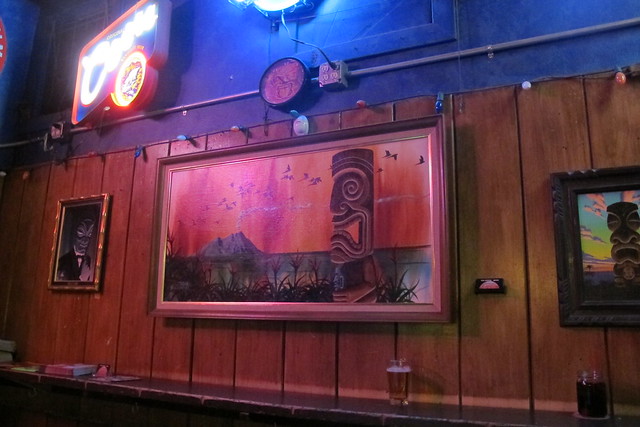 On our last visit to Mesa, Arizona, we caught a geographically convenient lunch at Oregano’s Pizza Bistro. (Tiki types in the Valley of the Sun should check out Hula’s Modern Tiki in Phoenix or pay their respects to Trader Vic’s Scottsdale, which closed in July 2011. The decor is being sold off piece by piece but the space is pretty much intact and being used for private events hosted by the Hotel Valley Ho.)

Anyway, Oregano’s serves up decent pizza and a heaping helping of nostalgia. Mark Russell founded the restaurant a decade ago to pay tribute to his father Lawrence Gibbilini, whose flair for cooking Italian food earned him the nickname “Lawrence of Oregano.”

Each of the dozen Arizona locations tries to evoke the feeling of a neighborhood Italian restaurant in Chicago from decades past. The dining rooms are filled with random kitsch like neon clocks, old wooden skis and surf boards covered with Christmas lights.

I was a bit surprised to see a mug shot for a young Frank Sinatra framed up on the wall. His crime? Seduction.

But the most interesting thing about Oregano’s is the menus, which graphic artist Jon Arvizu designed to look like retro album covers. There are several different styles but “Polynesian Paradise” features a hula girl pin-up and a tiki that looked rather familiar…

Design Toscano turns out resin tables with a similar tiki that they’ve dubbed The Lono (Tongue). (I ought to recognize it as we have one in the tiki room.)

But then I remembered how that catalog has been “inspired” by photos in “The Book of Tiki,” and there it was when I flipped through my copy. The image illustrated author Sven Kirsten’s discovery that tikis from the original Luau in Beverly Hills somehow ended up at the Hanalei Hotel (now a Crowne Plaza) in San Diego. Double déjà vu!

On the way back to LA from Mesa, AZ, our two-car caravan stopped at Hula’s Modern Tiki in Phoenix for Sunday brunch. There were quite a few folks enjoying the nice weather on the outdoor patio, but we opted to eat inside. (Well, everyone acquiesced to me since this whole tiki thing is more my gig.)

This Phoenix location is the newest (opened in 2009) of the Hula’s Modern Tikis—the others are found in Santa Cruz and Monterey, California. They remodeled and expanded a unique 1960s-era building with this rad hexagonal window.

“Tiki Time” happy hour is from 3:30 p.m.-6 p.m. Monday through Friday, and all night on Wednesdays with $5 appetizers and drinks. There’s also all-day drinks specials on weekends, Mahalo Mondays that benefit nonprofits, and “Word of the Day” Tuesdays with “2 Apps & 2 Tropical Cocktails for $20.” (See Facebook & Twitter for more details.)

It’s a bummer that they were out of their signature mugs, designed by Philippe Tilikete. The logo reminds me of Squidward from Spongebob Squarepants. (Tiki Farm had also produced a smaller companion mug.)

The bartender was totally gracious in answering all my questions about their for-purchase drinkware, and he trotted them all out so I could take a look. From left to right: a limited edition mug made by one of the locals, signature mai tai glass ($8), and generic Fu Manchu.

Hula’s Modern Tiki forgoes thatch and bamboo in favor of a mid-century, Palm Springs-style look. The Bosko shield and tikis carved by Tiki tOny provide an interesting contrast with the blond wood and retro atomic fabrics.

Another really cool touch was the long double shelves of devilish Munktiki mugs (“El Bastardo” and “U Bastard”) in red, black and white.

I didn’t have to drive the remaining five hours home, so I ordered a Zombie ($5). Their very tasty version had Cruzan rum, dark rum, lime, pineapple juice and passionfruit. And I adore brunch so I had to get the Island Eggs Benedict ($10) with fried spam.

Salads, burgers, tacos and sandwiches (like the luau pork and coleslaw sandwich, $9) made up the rest of the brunch menu, and everything sounded pretty good. Unfortunately, what did leave a bad taste in my mouth was our waiter. He was actually kind of rude and sarcastic, and not in a joking sort of way either.

Aside from that bump in the road, I really did dig this place and would definitely return. It’s practically worth the trip just to see the amazing collection of Munktiki mugs on display at the bar. Here’s another tip: According to the bartender, you can get $2 off buying one of their logo mugs or glasses if you order a cocktail. (Although, our server neglected to figure that in the bill…)