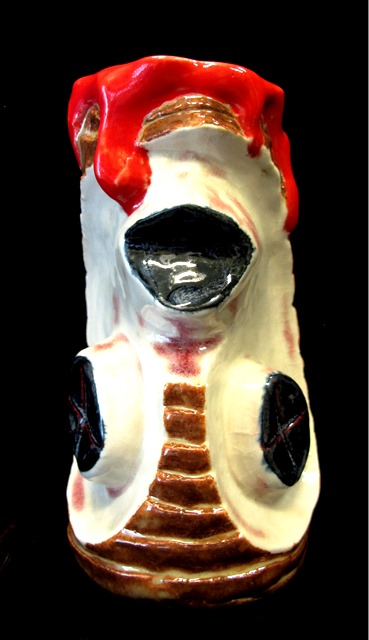 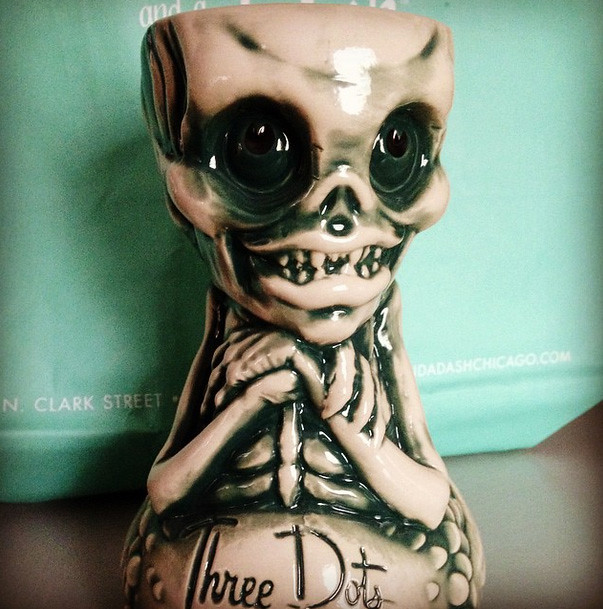 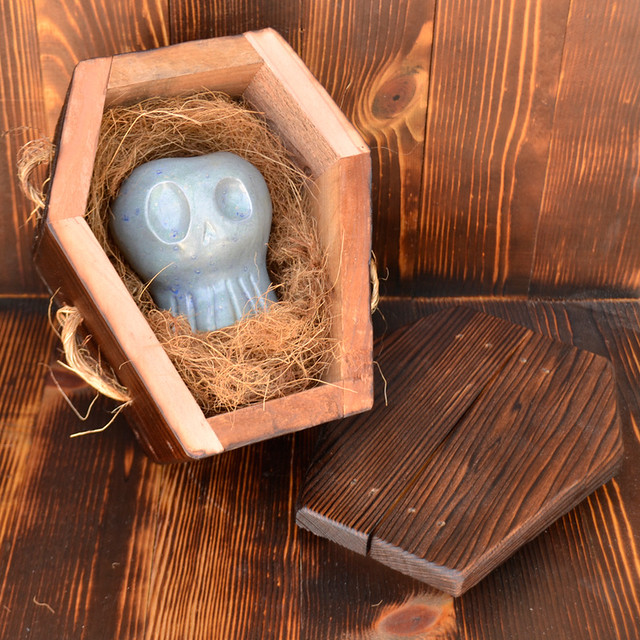 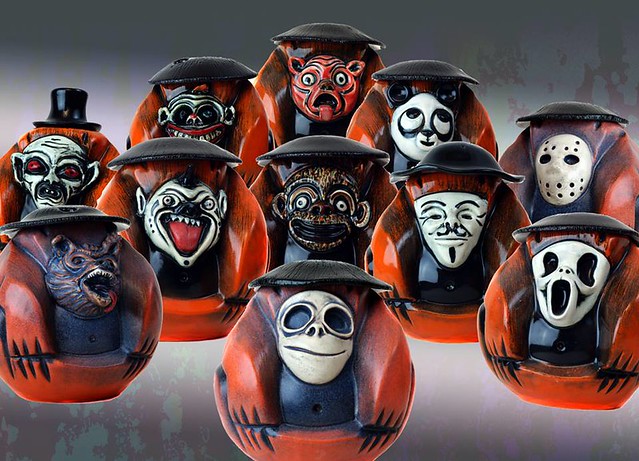 Chicago’s suburbs have beloved tiki spots like Hala Kahiki, Chef Shangri-la and Tiki Terrace, but there hadn’t been much in the city since the new incarnation of Trader Vic’s closed in 2011. Yes, there’d been some tiki nights and menus at bars around town (The Terrace at Trump, Curio, The Whistler, etc.) but nowhere with a tropical setting to match.

That changed in July 2013, when the much-anticipated Three Dots and a Dash opened in Chicago’s River North neighborhood. It’s a project from Paul McGee (formerly of The Whistler) and R.J. and Jerrod Melman of the Chicago restaurant group Lettuce Entertain You (Everest, L2O, Tru). (NOTE: As of December 2014, Paul McGee is no longer directly involved.) The bar’s name pays tribute to the drink Three Dots and a Dash. Don the Beachcomber, who also invented the Zombie (and tiki bars, for that matter), created it in honor of the end of World War II. (In Morse code, three dots and a dash means “V” — as in “Victory.”)

The Clark Street address is sort of deceiving as the speakeasy-style entrance is actually down an alley off Hubbard, directly across the street from Paris Club (another LEY venture where you can valet, though apparently there are a few self-park garages nearby too.) Look for blue glowing lights and a couple heat lamps and you’ll find a blue door and above it a small sign for Three Dots and a Dash.

You’ll enter a dark corridor and then go left down a set of stairs underneath an eerily lit wall of spooky skulls — sort of like you’ve stepped into an Indiana Jones movie. Keep going and you’ll find the host desk, which is one several relics purchased at auction after Trader Vic’s closed, and then the dining room is on the left.

But before that is the semi-hidden entrance to the private room, decked out with leopard-print banquettes, lots of fake (but very realistic) pillar candles and a revealing black velvet painting on the wall.

Blue and green fish float lanterns give a mysterious glow to the main space. Big round leather booths line the walls while four-top tables fill the center of the room. The showpiece is the gorgeous thatched roof bar with about a dozen barstools where you can admire the extensive rum collection.

Some tiki bars cultivate clutter, but this one keeps things more minimalistic in some spots like this corner with just a few spotlit ukuleles and tikis above the sleek banquettes. (The tikis that McGee snapped up in the auction date back to the 1950s and the original Chicago Trader Vic’s at the Palmer House hotel.)

According to Serious Eats, the Melman brothers visited some of “London’s famed tiki bars” before starting this venture. Clearly, Mahiki must have made an impression — though thankfully there’s no dress code or velvet rope attitude here. Three Dots and a Dash even serves their own version of the Treasure Chest, also topped with a bottle of Champagne and presented in a wooden chest made by Cheeky Tiki. (Reminds me of how both the Mai-Kai in Florida and Kahiki in Ohio had the ritual of the Mystery Drink presented by a lovely Mystery Girl, which the Mai-Kai still performs to this day.)

Three Dots and a Dash has a capacity of 240 but it’s still a new place — and a fun novelty for Chicagoans suffering through the winter — so you’ll likely find a line on popular nights. If you arrive quite early like we did you shouldn’t have any issues and you might even get to hear some exotica music — much preferable to the DJ that goes on later when it becomes more of a nightclub scene. Reservations are now accepted online.

The menu is beautifully illustrated in a vintage style with pictures of the drinks alongside their descriptions. Half are “classics” (Mai Tai, Jet Pilot, Three Dots and a Dash) while the other eight are “modern” concoctions from McGee. Each of these is priced at $13. Then there’s a section for shareable options like the Zombie Punch ($65 serves 3-4) and aforementioned Treasure Chest No. 1 ($385 serves 6-8). On top of all this there’s also a separate tome listing more than 200 rums for tasting, plus 16 classic rum cocktails (daiquiri, Navy Grog, Hurricane, etc.).

My favorite — and Chicago magazine’s, too – was the Painkiller No. 3, a creamy, dreamy combination of Bajan rum, Jamaican rum, coconut liqueur, passionfruit and pineapple. Named after a lyric from “South Pacific,” A Lonely Island Lost in the Middle of a Foggy Sea is a riff on the Mr. Bali Hai featuring aged rhum agricole, blackstrap rum, Indian rum, cold brew coffee, pineapple and lime. It’s labeled with a skull warning of its “impressive strength” and it’s no joke. Our designated driver asked for a recommendation on a drink to get sans alcohol and our server suggested the Poipu Beach Boogie Board. This sweet and tart tipple of guava, maraschino, grenadine, pineapple and lemon is usually given a kick with rye whiskey and overproof rum.

I’m not a fan of bananas, but I still insisted we get Bunny’s Banana Daiquiri for the garnish, a half banana turned into a dolphin. Don’t expect too much sweetness when you sip this blend of fresh banana, coconut liqueur, lime, Jamaican rum, spiced rum and overproof rum. Of course we also had to order the namesake drink, here made with aged rhum agricole, Guyanese rum, honey, falernum, lime, allspice and Angostura bitters. It was a well-balanced winner, presented with three Luxardo cherries and a pineapple spear. (Three dots and a dash, get it?)

Foodwise, there’s a small menu of about 10 small plates and we sampled almost all of them, starting with the “luau chips” ($9). The pineapple-flecked guacamole came with puffed rice crackers, though I probably would have preferred tortilla chips.

The Thai fried chicken ($11), which is highlighted on the menu as a signature dish, was a hit with us and disappeared the fastest. The boneless nuggets were lightly breaded and doused in an amazing garlic-chili sauce. Crag Rangoon ($11) is usually heavy on the cream cheese, but the filling in this rendition was actually loaded with blue crab. It came with a tray of four dipping sauces: Thai chili, peanut (so good!), sweet and sour (also tasty) and hot mustard (not too spicy). The award for best pupu presentation would go to the coconut shrimp ($13), which are served in half a coconut perched on top of panko breadcrumb “sand.”

The meat on the Polynesian spare ribs ($16) didn’t fall off the bone but the pineapple glaze was tasty enough. Also decent were the Hanali spring rolls ($12) and curry chicken skewers ($13) though with such steep prices for small portions I think next time we’ll pass on all three of these and stick with the Thai fried chicken and crab Rangoon.

(Photo by Three Dots and a Dash)

I love when tiki bars come out with souvenir mugs custom made for them, and Three Dots and a Dash already has three designs produced by Tiki Farm. First was the blue sea urchin mug, definitely one of the most beautiful mugs I’ve ever seen, then came this golden bamboo mug and a likeness of McGee with seashell spectacles ($20 each). They also serve and sell several other styles of Tiki Farm mugs, including a few imprinted with the bar’s logo.

Three Dots and a Dash takes the state of tiki in Chicago to a new level with its serious mixology, good food, signature mugs and swizzle sticks, and impeccable decor that provides the perfect setting for a bit of tropical escapism. It should come as no surprise that I’ve added Three Dots and a Dash to my list of the Top Tiki Bars in America.