Some submissions, like “Episode 9” by Glenn Barr (above) and “One Eleven” by Chris Reccardi (first image), went for a futuristic style that I was digging. Other featured artists for this show included Tim Biskup, Lynne Naylor, Bosko and, my personal favorite, Shag.

I was also pleased to find two paper sculptures from Kevin Kidney and Jody Daily, who create awesome art and collectibles for Disney (recently the 50th anniversary of the Enchanted Tiki Room). It’s fitting that they would find inspiration in Tomorrowland and its Utopian vision of the future from a mid-century perspective. I loved the sweeping lines in “Goodyear ’67” — named after the company that sponsored the PeopleMover.

It took me a second to realize the setting for Shag’s painting “The Refill” was the Kaufmann House, a Palm Springs local landmark designed by Neutra we’d seen last year on the Modernism Week architecture bus tour.

The M Modern owners also operate Shag: The Store and have worked with Josh Agle for years, so they often have rare items you won’t find too many other places, like “Shag Map of the World.”

“Drawn by memory from the artist Shag, based upon his travels of Planet Earth,” it amusingly matches signature cocktails to their cities and countries…Mai Tai to the Bay Area (for Trader Vic’s), Blue Hawaiian for Hawaii and so on. Shag’s web site has a larger, detailed version.

It was originally made for the “Shag: Outbound with the In-Crowd” show last November at the Outré Galleries in Australia. The remaining framed prints are only available Down Under, but M Modern has an edition of 10 giclées on stretched canvas priced at $4,000 each. (If only I could stretch my pocketbook that far.)

Well, that’s a wrap for our “Palm Springs Weekend” — hopefully we’ll be able to come back next year for some more fun in the sun and mid-century modern merriment.

A tiki art show at M Modern just wouldn’t be complete without a contribution from Shag. Naturally it had a little red “sold” dot next to it.

Derek Yaniger and Doug Horne were more familiar faces from The Book of Tiki 10th Anniversary exhibition at M Modern from awhile back, which is not surprising since author Sven Kirsten also curated this show.

The home decor aspect of the exhibition’s theme was emphasized by these tiki lamps courtesy of Jim “Polynesiac” DePompei. I especially liked the Andres Bumatay-style one on the left.

This “Twin Tangaroa Trio” is by Lake Surfer, whose carvings have appeared in Trader Vic’s Chicago and the Foundation Tiki Bar in Milwaukee. As there’s a lack of palm trees in his present homeland Wisconsin, he uses hardwoods like oak and maple, which give his work a distinctive look.

The pièces de résistance were undoubtedly the two intricate wood collages (“Face to Face” on left) from Leroy Schmaltz, “godfather of all tiki carvers” and co-founder of Oceanic Arts. It was also very appropriate for Ken Pleasant to be represented (“Irony” on right) since he carries on the aesthetic of Witco, the company that popularized primitive-style furniture in the 1960s. (See: Tiki Modern)

Dawn Frasier‘s paintings have such a beautiful, ethereal quality to them. “The Mystical Order of Mu” was part of this group show, but she also had a few other pieces on display.

The other new exhibition was called Modern Moods, a solo show from Bosko Hrnjak. I already dig his straightforward mid-century modern settings, but this one (“Sector 9”) gave it a fun sci-fi twist with a crash-landed spaceship and the sly suggestion of a future government cover-up. 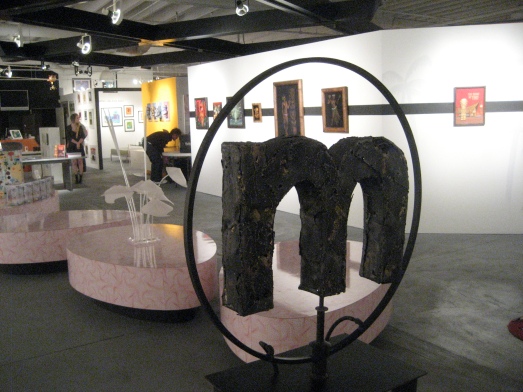 Back in October, the M Modern gallery in Palm Springs hosted an exhibition of art inspired by Sven Kirsten’s “The Book of Tiki” to celebrate the 10th anniversary of the tome’s release.

If there were a textbook for Tiki 101, this would be it. It’s a serious (though still tongue-in-cheek) look at the history of the “tiki” phenomenon and how it permeated American culture in the 20th century. It’s now out of print, but Taschen also published a condensed version called “Tiki Style” that’s still available, though with fewer glorious vintage photos. Pictured is Moritz R.’s original artwork for the cover. 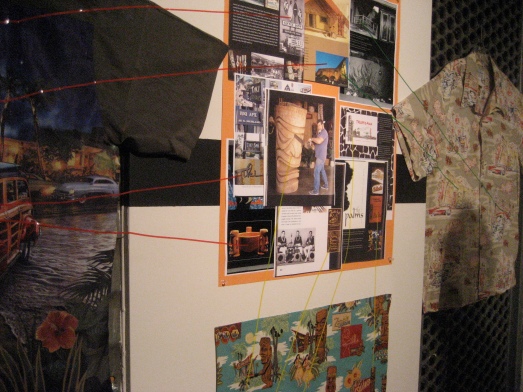 One of the most interesting parts of the exhibit was this diagram showing how images from the book made their way onto fabrics and Aloha shirts as the recent “tiki revival” grew in popularity. 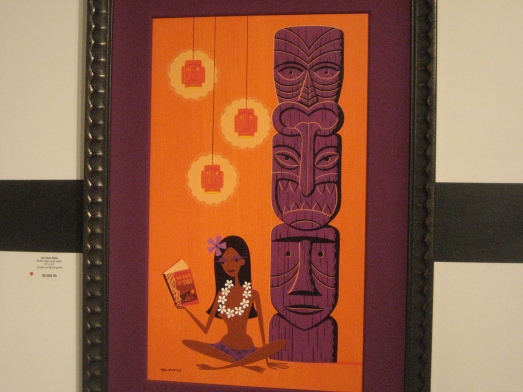 It’s fitting that Shag (Josh Agle) would show a painting, considering it was his art that got many of us interested in tiki in the first place. We were some of the first folks to walk through, and we saw that the $6,500 piece had already been marked “sold” with a red dot.

It was basically a round-up of all my favorite tiki artists, including Heather Watts with one of her fabulous black velvet paintings.

This Witco-esque work from Bosko depicted the Royal Hawaiian Estates, a Polynesian-themed condominium community built in Palm Springs in the early 1960s. The buildings are still there and being restored. See more information about them here. 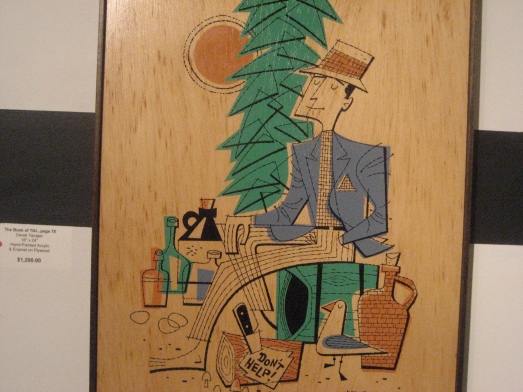 Dale Sizer‘s sparkly “The Heartbreak of Cricket Blake” paid tribute to “Hawaiian Eye,” a 1960s television show guest-starring Connie Stevens. It was about a Honolulu-based detective agency with a tiki as its logo.

There were many more amazing art pieces besides the ones pictured—these were just a few. I’ll leave with you with this other-worldly drawing from Doug Horne.