A day at Disneyland is not complete for me without a visit to the Disney Gallery, and its new-ish, larger location at the end (beginning?) of Main Street makes it easy to drop in on your way out of the park. 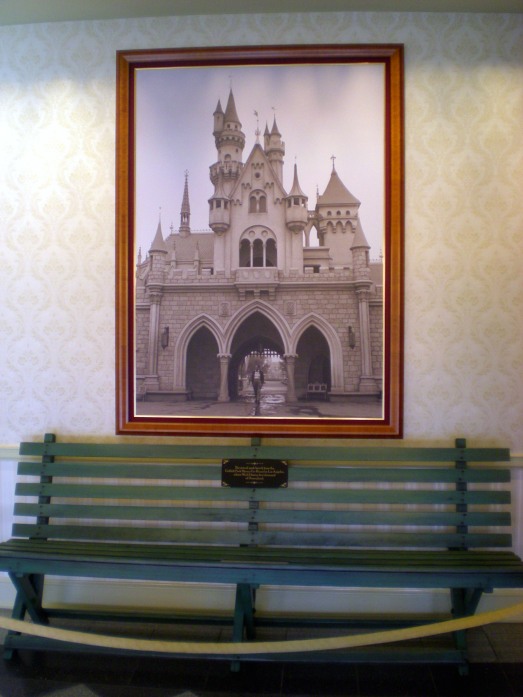 Just adjacent is the Opera House lobby, where you can admire this incredible piece of Disney history. The plaque says that this is the park bench (from Griffith Park’s merry-go-round) where Walt Disney dreamed up the idea of Disneyland. I can also attest that that circa-1926 carousel is a magical place, indeed.

And on the topic of Disneyland’s origins, artists Kevin Kidney and Jody Daily have been designing a slew of things to celebrate the park’s 55th anniversary, such as this “Disneyland ’55 Paper-Sculpture-O-Rama” (much better pic at their link). 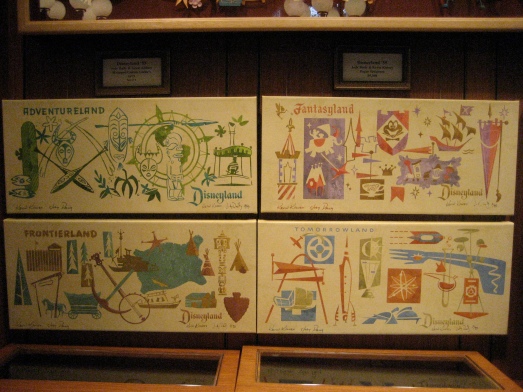 On these wrapped canvas giclées, it’s easier to see how each of the main themed areas are represented with symbols of attractions from when Disneyland opened in 1955. Some are long gone, but there’s still the Jungle Cruise, Tea Cups and Mr. Toad’s Wild Ride (a favorite of Mr. Baseball). 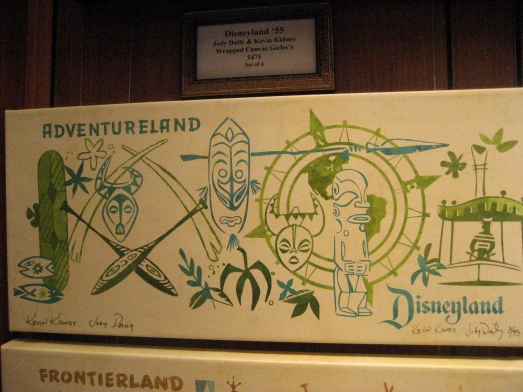 On this closer shot of the Adventureland one, you can see a Marquesan tiki next to the Jungle Cruise boat. You’re thinking The Enchanted Tiki Room, right? Wrong! (It didn’t open until 1963.) In Daveland’s collection of vintage Disneyland photos, you can spot this tiki propped up between two benches. (FYI, the store also had prints of the individual lands for about $30, though the stack I sifted through only had Frontierland.)

The Disney Gallery space used to be the Bank of Main Street, and the vault has been housing a couple of Shag’s original paintings from the Haunted Mansion anniversary. How neat! (And prudent, too, considering I think they’re priced at about ten grand each.)