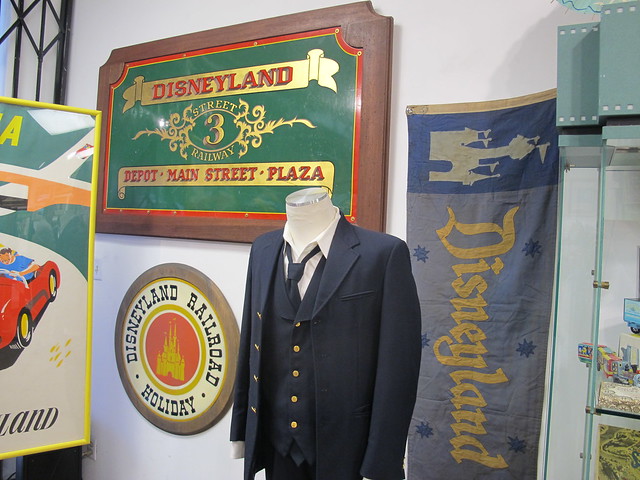 Right now, the two-room space at Van Eaton Galleries in Sherman Oaks (LA area) is so full of Disney treasures that it may be the next best thing to visiting The Happiest Place on Earth itself. (Also, it’s free and you’re probably less likely to catch measles.) 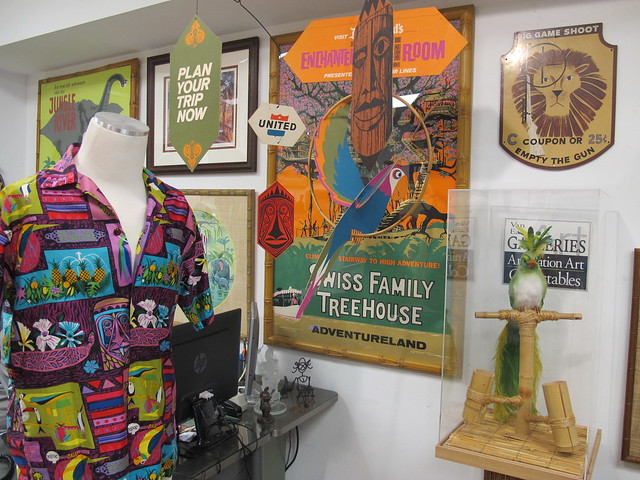 It’s all part of The Story of Disneyland: An Exhibition and Sale, one anonymous person’s massive collection that will be auctioned off piece by piece on February 28 & March 1, 2015. A substantial portion of the items are on view to the public through February 27, Tuesday through Saturday 10 a.m.-6 p.m. 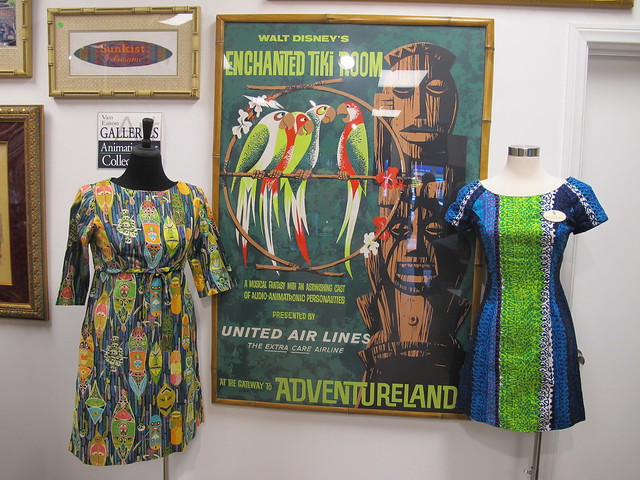 The colorful castmember uniforms ($400-$600) from Walt Disney’s Enchanted Tiki Room were so popular that the fabric was sold in Adventureland stores. There were a few different patterns, with my favorite being the one featured here on the left (closeup on Instagram). On the right is a vintage hostess costume ($900-$1200) complete with nametag from the now-defunct Tahitian Terrace restaurant. In the middle is an original Enchanted Tiki Room attraction poster ($10,000-$12,000). 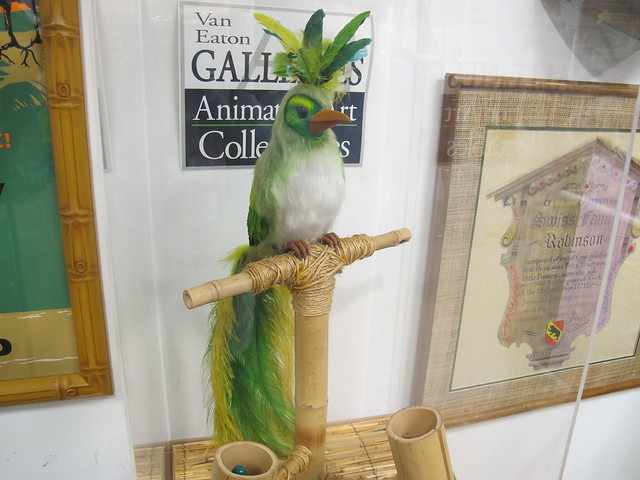 The Adventureland piece with the highest bidding estimate — $20,000-$30,000 — is this animatronic member of the Enchanted Tiki Room’s chorus from the 1970s. It was apparently purchased from an Imagineer who worked on the Tiki Room and it still has all the original hardware inside. 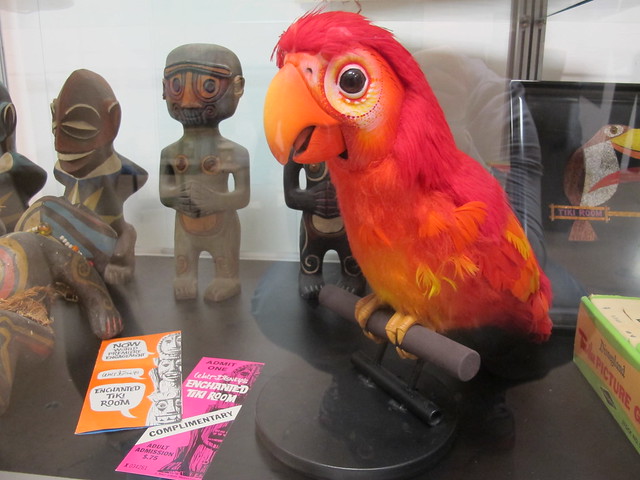 The same can’t be said for this feathered friend, so he’s valued a little lower at just $18,000-$20,000. How did this little birdie fly away? A cast member received it as a retirement gift from their supervisor! (Sure beats a gold watch.) 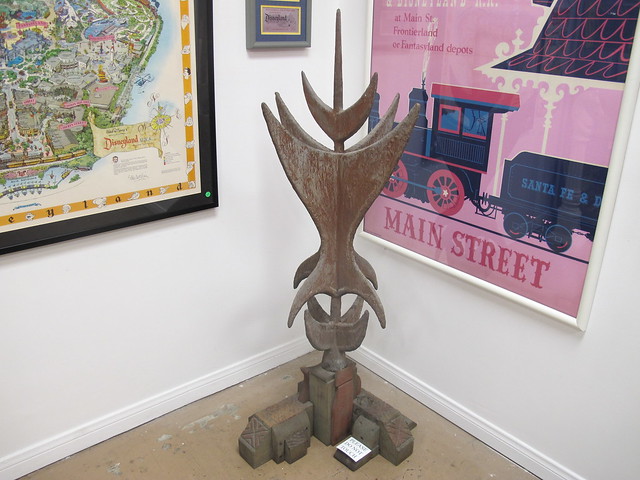 Recognize this? It’s the finial that sat atop the A-frame ticket booth at the entrance to the Enchanted Tiki Room. According to the catalog, an Imagineer rescued this one-of-a-kind piece ($15,000-$20,000) from demolition when the bamboo and wood structure had to be torn down in 2000. Later, renowned carver Leroy Schmaltz of Oceanic Arts was commissioned to make a wooden base for it. 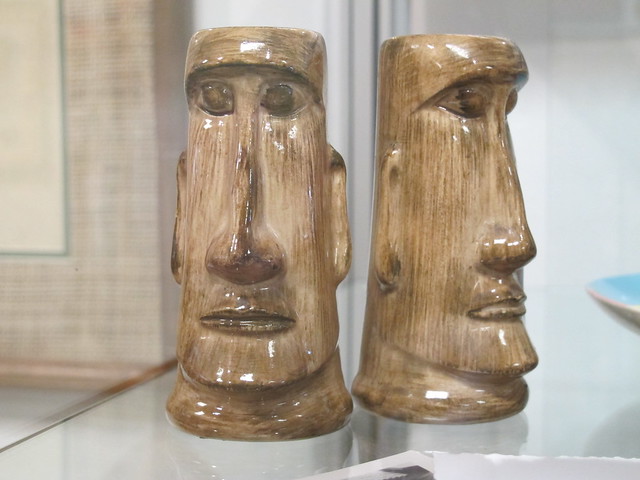 Not everything will cost you beaucoup bucks, though. There are lots of things in the $100-$200 range, like these Disneyland Moai salt and pepper shakers from 1956. (These seem to appear on eBay for less every now and again, but the attention for this particular auction will surely drive up the price.) 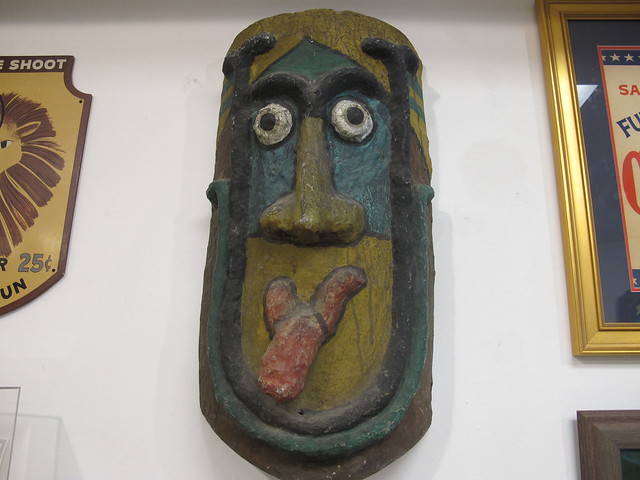 Now this face I really couldn’t place. Turns out it’s one of three handpainted “Nature Tree Masks” ($2,000-$4,000) that adorned the trees near the loading area of the Jungle Cruise for a few years around 1956. 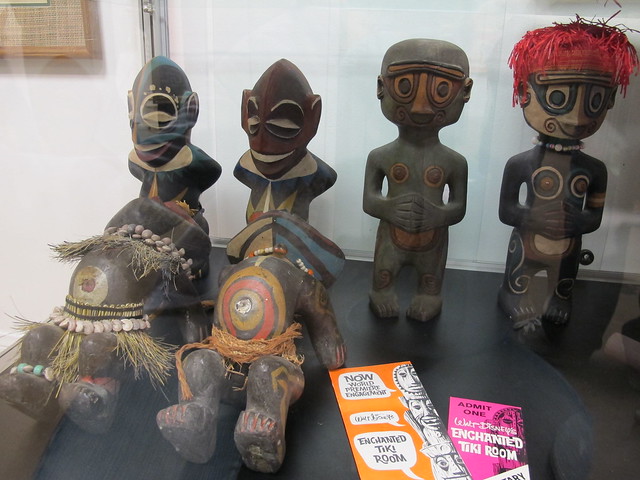 There are also six “Tangaroa-Ru Babies” that descended from the flowers of the Tangaroa tree of life at the end of the Enchanted Tiki Room pre-show. Disney Legend/Imagineer Rolly Crump designed these based on Polynesian carvings. They’re estimated to go for about $3,000 each. The deep-pocketed collector could be well on their way to building their own authentic Enchanted Tiki Room. 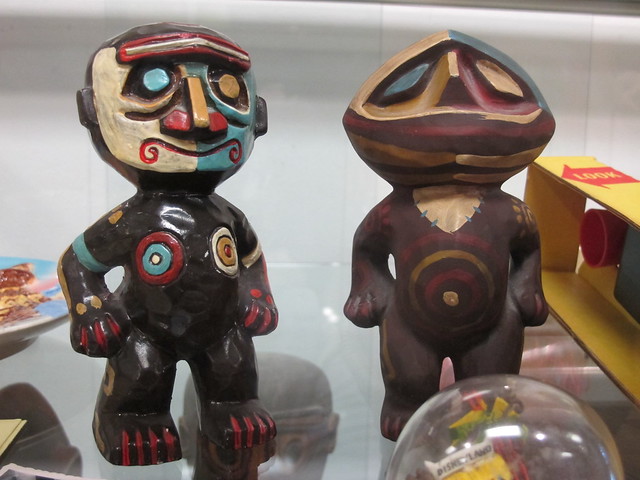 Rolly Crump also designed these smaller ceramic versions ($200-$400) that were sold as souvenirs at Disneyland. The catalog notes that they’re rare finds. 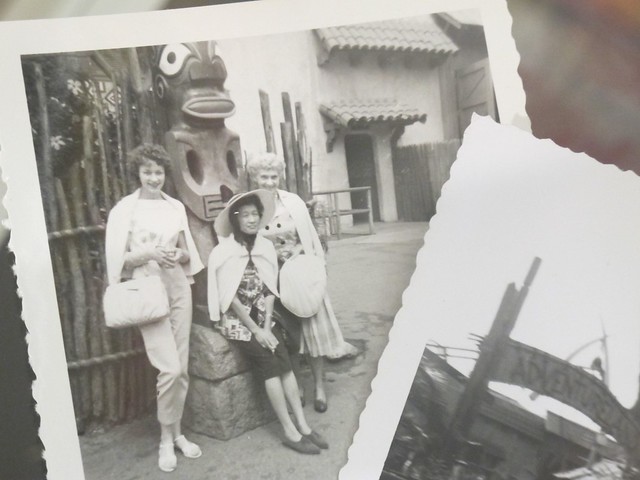 Many of the artifacts were once Disney property or official souvenirs, but there are also stashes of visitors’ personal slides and photographs from over the years. I adore this picture of these ladies posing with the Marquesan tiki that used to be in Adventureland. It’s part of a bundle of 10 amateur photos at Disneyland circa 1956-1959. 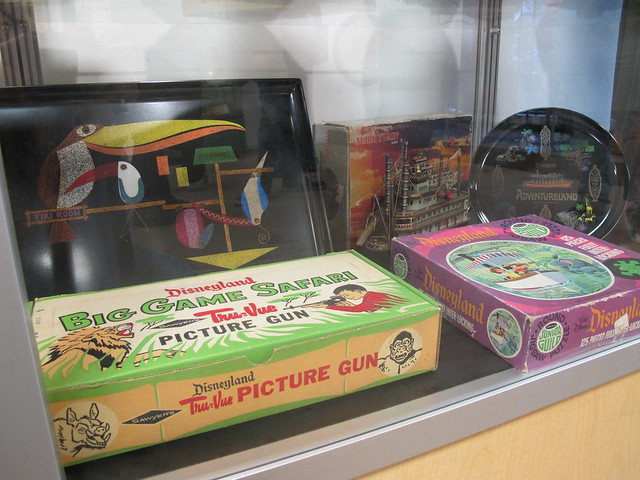 You can browse through the entire collection in the 300-page online catalog, which is also available for purchase in a soft-cover version ($30) and a hard-cover edition ($95, including a complimentary soft-cover copy). (There’s a section dedicated to Disney World’s Polynesian Resort starting on page 287.) 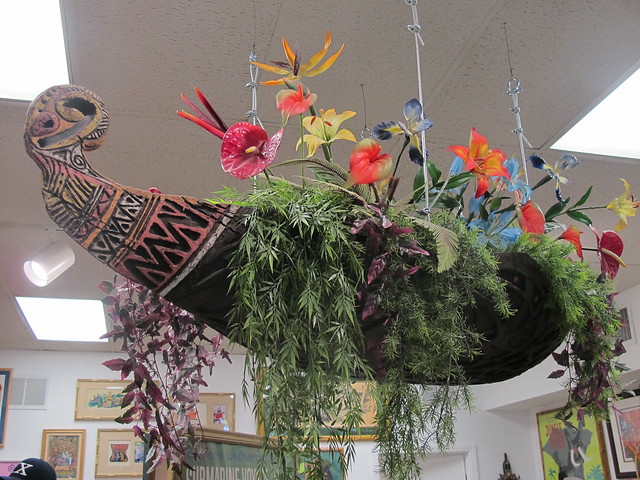 Which of these items would you bid on if you had unlimited funds? I’d love this flower boat ($12,000-$15,000) from Disney World’s Enchanted Tiki Room as the centerpiece for my own tiki room. Or perhaps the Pirates of the Caribbean skeleton ($60,000-$80,000) guzzling liquor for more of a Smuggler’s Cove style… 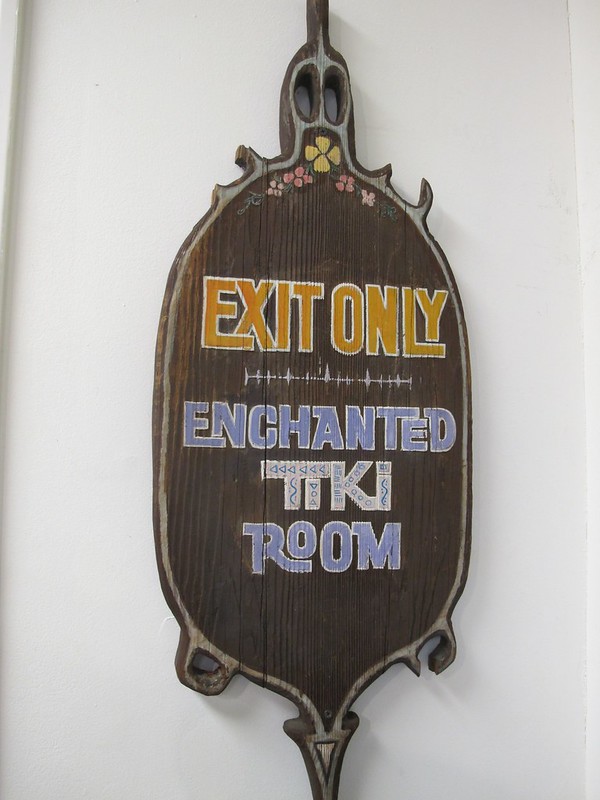