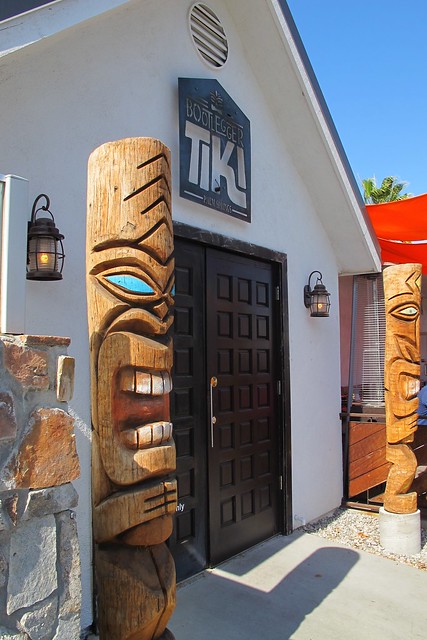 In 1926, a young man named Ernest Raymond Beaumont Gantt left home and traveled around the South Pacific, Caribbean and beyond. Back on American soil, he was a bootlegger during Prohibition and when the Noble Experiment ended, he opened the first tiki bar. Don the Beachcomber in Hollywood became such a success that Ernest legally adopted the moniker.

By the 1940s, he had moved to Hawaii and turned over the U.S. rights of the business to his ex-wife, Cora Irene (“Sunny”) Sund, who opened more than a dozen additional locations over the next few decades. Don the Beachcomber was a favorite among celebrities so it made sense to have a branch in Hollywood’s desert playground. Don the Beachcomber Palm Springs opened in 1953 and in its heyday attracted famous faces (and voices) like Frank Sinatra, Bing Crosby and Bob Hope. 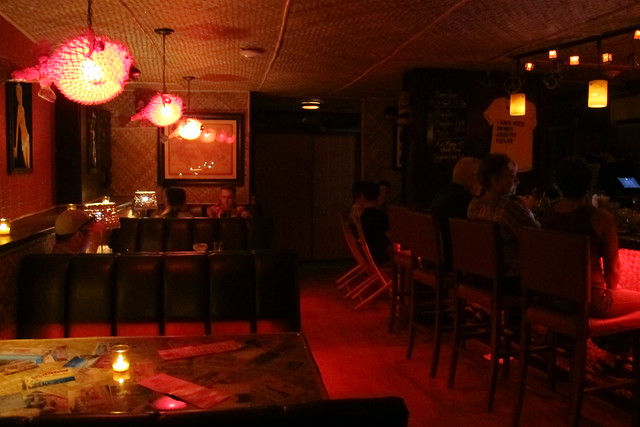 Literally following in the footsteps of that historic establishment is Bootlegger Tiki and neighboring sister spot Ernest Coffee Co. (The tiki bar references Don’s former profession, while the coffee shop was given his real first name.) A curtain in the hallway separates the two, but Bootlegger Tiki also has an official entrance flanked by two carved tikis on Via Lola Street just off North Palm Canyon Drive. 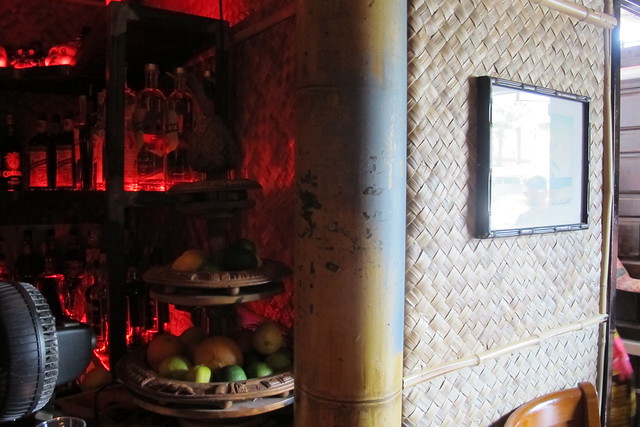 I knew the tiki torches on the roof had been restored — and even worked into the logo for Ernest Coffee Co. — but I was excited to learn that to the right of the bar is a pillar (painted to resemble bamboo) that had also been part of Don the Beachcomber Palm Springs. 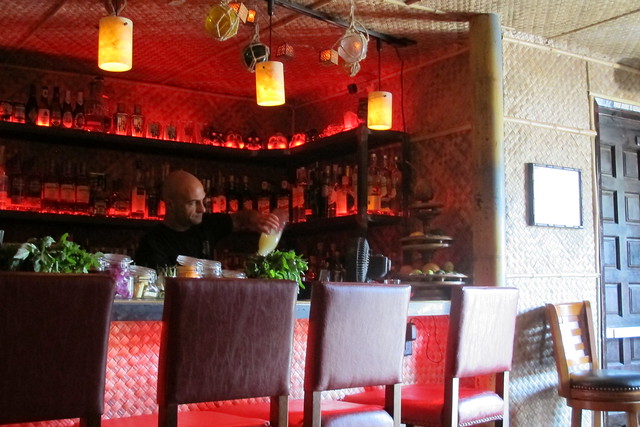 The space is quite small so you’ll want to get there close to when they open at 4 p.m. to snag one of the three booths or five spots at the bar. There are also three seats along a ledge by the entrance and three shorter rattan chairs to the left of the bar. (Patrons can also take their drinks out to the patio shared with Ernest Coffee.) 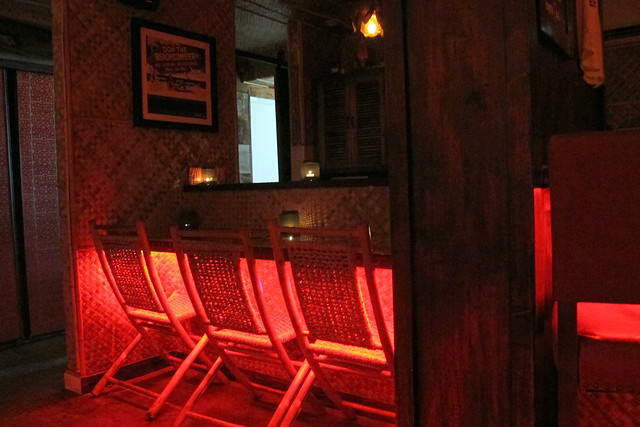 Above them you’ll notice one of Tom Hofer’s paper collages designed to look like giant vintage matchbooks. This one features Don the Beachcomber, naturally. (Hofer is often one of the vendors at the bi-monthly International Tiki Market Place at Orange County’s Don the Beachcomber — Don’t get confused, that restaurant is a recent incarnation of the brand.) 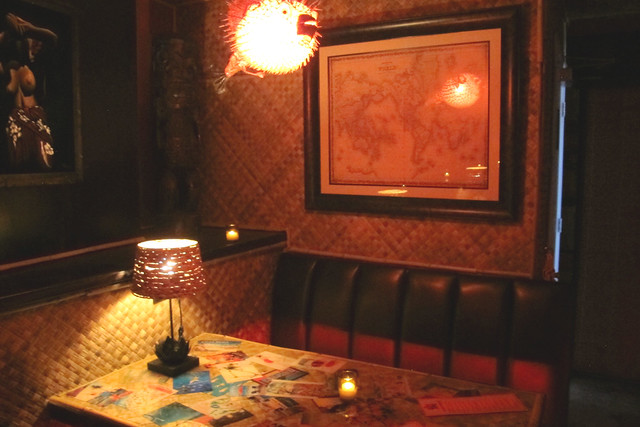 The decor of this tiny tropical retreat is just gorgeous. The requisite lauhala matting and bamboo are interspersed with panels of red-velvet, Chinese-print wallpaper that give a glamorous touch to the island hut vibe. Further enhancing the sultry setting are flickering candles, the red glow of pufferfish lanterns and titillating black velvet paintings. (See what I did there?) 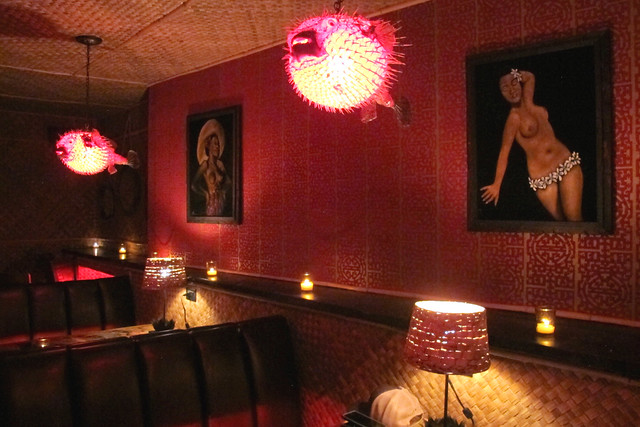 Another nod to local tiki history is this reproduction of Edgar Leeteg’s famous “Hina Rapa” (left), which Palm Springs businessman Irwin Schuman saw in a Honolulu art gallery and inspired him to open the Chi Chi Grill Cocktail Lounge in 1941. There was a copy of the black velvet painting on the wall of the Polynesian-themed spot, and it was so popular that Schuman reprinted it on menus, matchbooks and many other items — but he didn’t bother to get permission from the original artist. 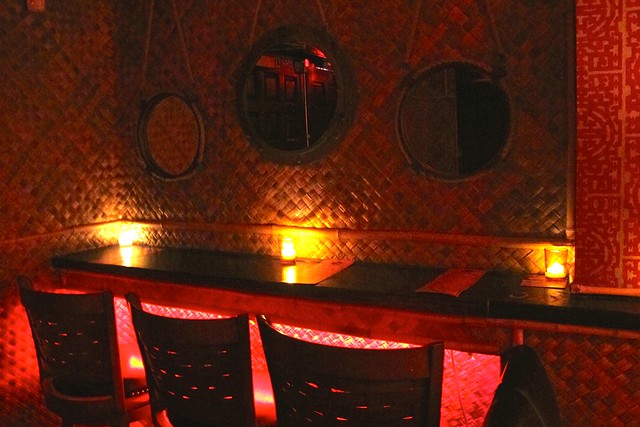 Reggae music was on the sound system when we first arrived, then it switched to Rat Pack and other loungey tunes, which I personally preferred. Even better would have been some exotica to really set the mood! 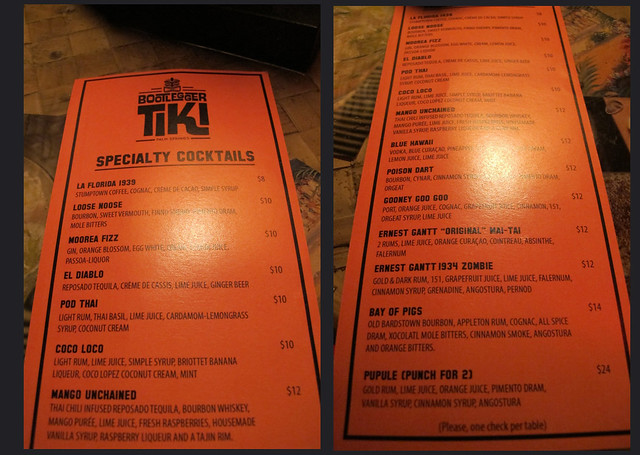 When Bootlegger Tiki opened in September 2014 they started off with a core menu of 10 cocktails. That’s since expanded to more than 25, ranging from non-tiki standards (French 75, Sazerac, etc.) to complicated concoctions involving mole bitters and cinnamon smoke. 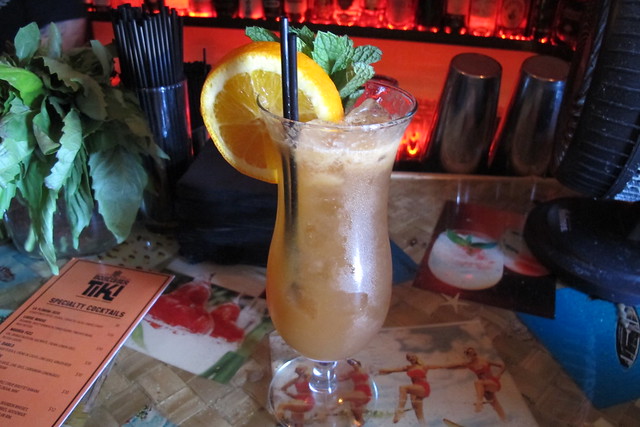 Trader Vic is credited for inventing the Mai Tai, though there’s been debate about that over the decades. (A chapter in Jeff Berry’s book Beachbum Berry Remixed offers an interesting investigation behind the claims.) Bootlegger lets you know where their loyalties lie by serving up the Ernest Gantt “Original” Mai Tai ($12). It’s a very different creation, composed of gold and dark rums, lime, orange liqueur, Velvet Falernum, absinthe and Angostura bitters. (Don’s famous drink, The Zombie, is also featured on the menu.) 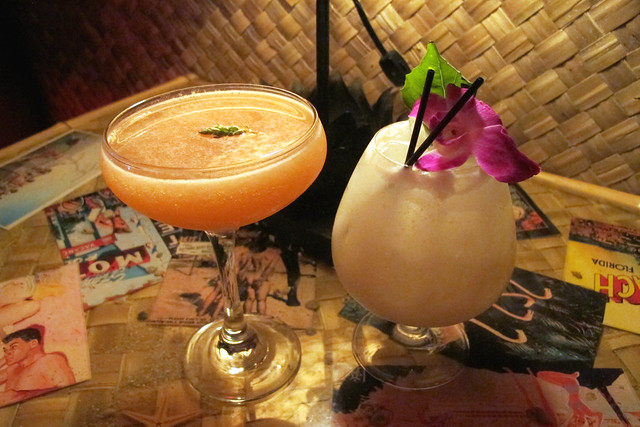 One of the most popular drinks is the Pod Thai (left, $10), a more exotic Pina Colada with Thai basil and cardamom-lemongrass syrup. The “Modern Classics” are where the staff lets their creativity loose. For the spring menu, bar manager Guillaume Galataud devised the Hasenpfeffer ($14), made with Barr Hill gin, rhubarb-lavender purée, Amaro Nonino, lemon and house-made peppercorn ginger syrup. 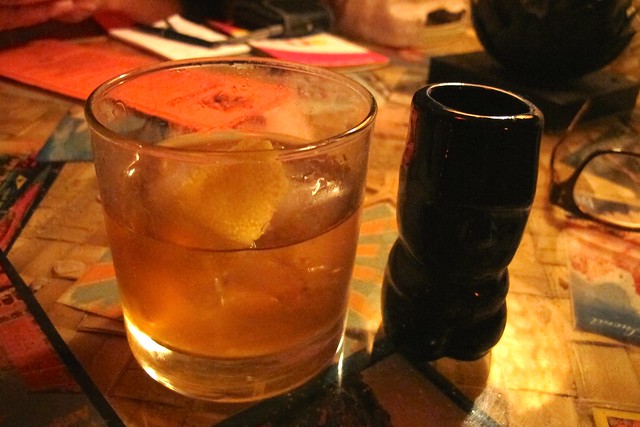 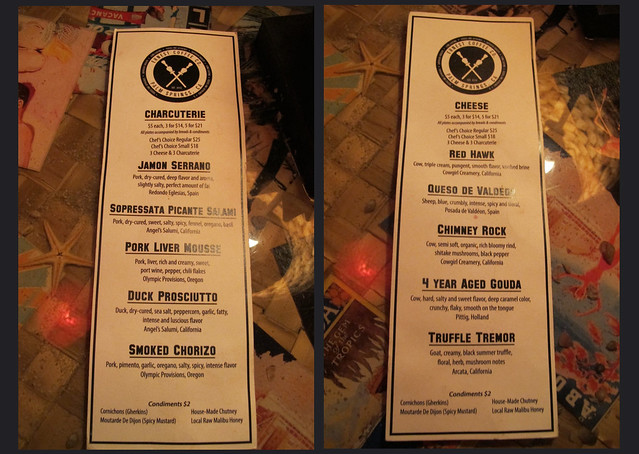 There’s isn’t much available in the way of food, but you can request the cheese and charcuterie menu from Ernest Coffee Co. (Since our visit a few more snacks have been added: sriracha coconut popcorn, dried mango chili, Coachella Valley dates and Hawaiian macadamia nuts.) 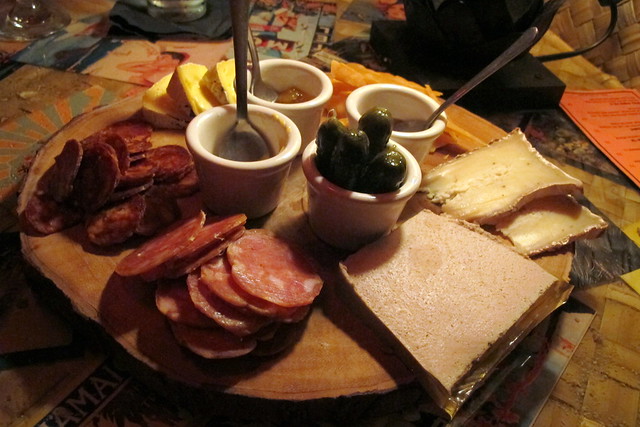 The regular platter ($25) turned out to be quite a spread, as you can see by that hefty slab of pork liver mousse. We were also pleased with our picks of the aged gouda, Cowgirl Creamery cheeses (St. Pat’s and Truffle Tremor), sopressata picante salami and smoked chorizo. (The platters are listed as chef’s choice, but our server let us make the six selections.) 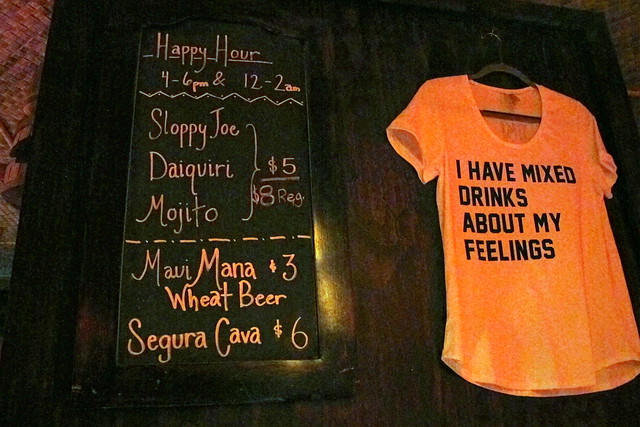 Happy hour is offered every day from 4 p.m.-6 p.m. and again from 12 a.m.-2 a.m., featuring $5 daiquiris, mojitos and Sloppy Joes (not the sandwich but the drink made with rum, dry vermouth, lime, triple sec and grenadine).

Bootlegger Tiki doesn’t have any souvenir ceramic mugs specially designed for them, but they do sell logo pint glasses, flasks and shakers, along with t-shirts and tanks tops. They’re available for purchase at the bar and at Ernest Coffee Co. next door.

With both Bootlegger Tiki and Tonga Hut Palm Springs opening in the past year or so, Palm Springs has become an even more desirable location for a weekend getaway.