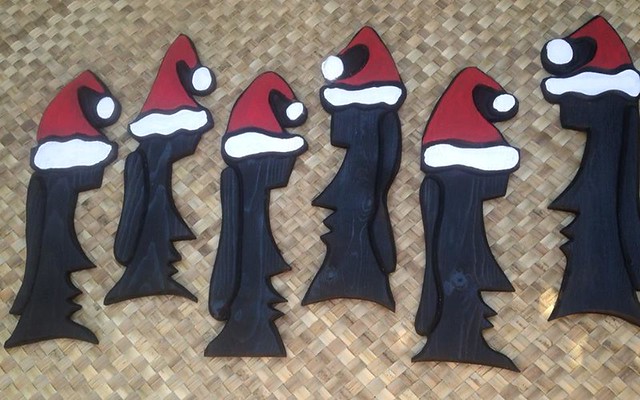 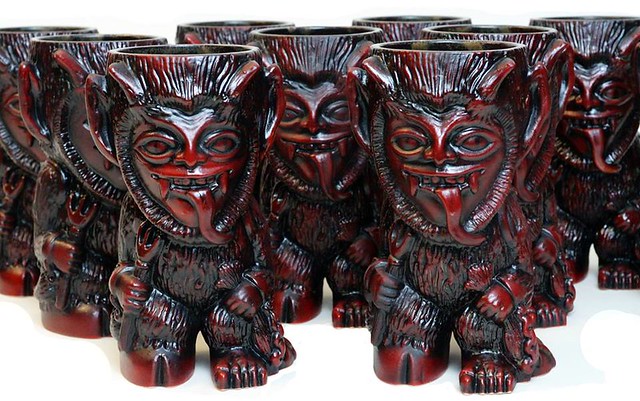 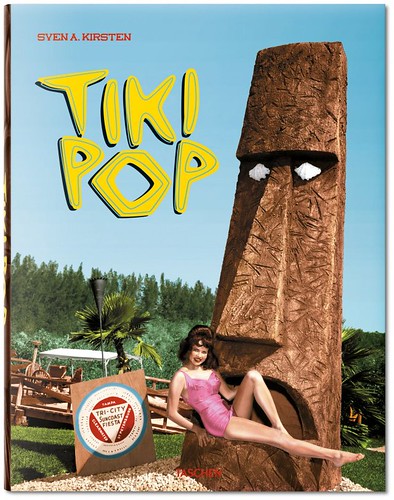 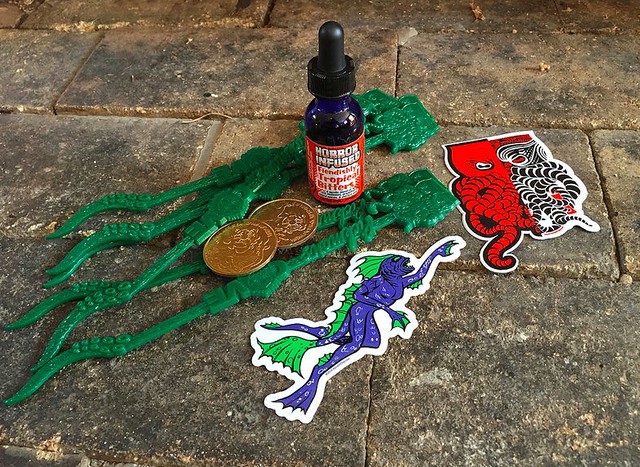 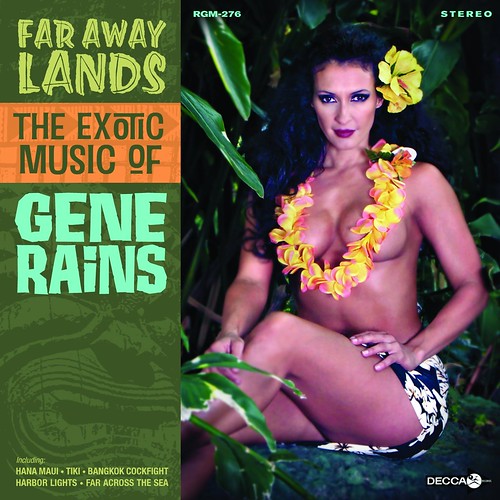 My long-suffering boyfriend can attest that people who like tiki can be picky and notoriously hard to shop for, so here’s some last-minute gift ideas for the tiki fanatic in your life!

While browsing Etsy, I stumbled upon these cute wooden signs painted by DiamondDustDesigns. She has several holiday designs but my favorite is this “I’m Dreaming of a Tiki Christmas” sign ($13) with a clever reindeer tiki.

2. Beachbum Berry’s Potions of the Caribbean: 500 Years of Tropical Drinks and the People Behind Them Book

Jeff Berry‘s previous books Beachbum Berry Remixed and Sippin’ Safari present recipes for vintage cocktails — and the history behind them — in a highly entertaining and enlightening fashion. I have not doubt the same can be said for his latest, Beachbum Berry’s Potions of the Caribbean: 500 Years of Tropical Drinks and the People Behind Them ($35).

Trader Vic’s London has released a limited edition t-shirt ($30) in honor of their 50th anniversary. I love the tapa print juxtaposed with the architectural icons of Big Ben, Tower Bridge and “The Gherkin.”

In case you missed “Kon-Tiki” in the theaters earlier this year, the DVD/Blu-ray is now available for this thrilling retelling of Thor Heyerdahl’s raft voyage from Peru to Polynesia. You can watch the English version on Netflix Instant, but you’ll have to get the DVD/Blu-ray for the original Norwegian (with English subtitles) version.

The Mai Tai may be the drink most closely associated with tiki bars these days, but the Zombie is really where it all started. It was the mixological masterpiece of Don the Beachcomber (Ernest Raymond Beaumont Gantt), who also pretty much invented the concept of a tiki bar (i.e. a Polynesian-inspired place serving rum concoctions). Made with a blend of rums, citrus, spices, Pernod and bitters, the Zombie was mysterious, complex and potent.

It was so popular that opportunists began creating their own Zombies, some bearing little resemblance to the original article. Don the Beachcomber went to great lengths to keep his recipes a secret, so nobody really knew what went into the original Zombie until decades later when Jeff “Beachbum” Berry embarked to uncover it through exhaustive research and interviews. (His book Sippin’ Safari: In Search of the Great “Lost” Tropical Drink Recipes… and the People Behind Them was one of the main influences that really got me into all things tiki).

Now, David J. Montgomery (aka Professor Cocktail) has added another chapter to this intoxicating narrative with his recently published e-book Professor Cocktail’s Zombie Horde: Recipes for the World’s Most Lethal Drink. He unearthed and assembled more than 80 recipes for the Zombie, starting with the real deal and its earliest imitators in the 1930s on through the decades. Helpful “Professor’s Notes” accompany many of the recipes and warn readers as to which drinks are duds and which ones are worth recreating at home.

My favorites are the reinvented versions of the Zombie collected from today’s top tiki bars like Smuggler’s Cove, Mahiki and Frankie’s Tiki Room. And it’s not just tiki bars that are represented but also craft cocktail spots around the country, including PDT, Bar Agricole, Caña Rum Bar and Drink. It should also be noted that 10 of these recipes are Zombie Horde exclusives that have never before been published.

Zombie Horde is available as an e-book for $2.99, but there’s a paperback version ($13.46) if you’re old-school. The author has also just released another new e-book for imbibers: Professor Cocktail’s Holiday Drinks: Recipes for Mixed Drinks and More.