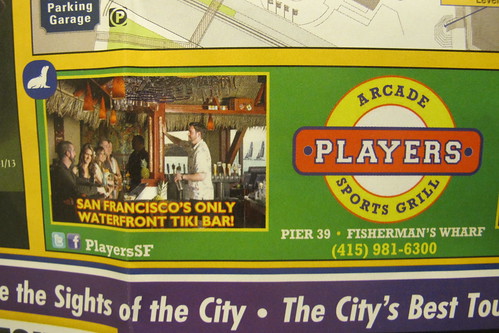 On our last visit to San Francisco, Mr. Hockey found an ad in our little tourist map for Players Sports Grill & Arcade that billed it as “San Francisco’s only waterfront tiki bar.” He asked me if I knew about it and I snobbishly insisted that it couldn’t be a real tiki bar.

Our wanderings along the Embarcadero did eventually take us to Fisherman’s Wharf and Pier 39, and Mr. Hockey wanted to see if Players was legit. I remained skeptical about a sports bar, arcade and tiki bar coexisting under one roof.

The front area looked like your typical sports bar, but then we spotted this little kiosk with a Lono (Hawaiian tiki) and a sign pointing towards the Luau Lounge tiki bar that was 50 steps away.

But first you have to navigate through a little labyrinth of video games and skee ball to the back of the establishment. (I suppose if you have kids you could let them loose here while you go enjoy a drink?)

Coincidentally they even have an arcade game that features Moai among the graphics. Cruis’n Exotica — no relation to the musical genre, as far as I can tell — is the 1999 sequel to the racing games Cruis’n USA and Cruis’n World. Alas, it doesn’t look like Easter Island is one of the available tracks.

Maybe it’s the obscure location but the Luau Lounge was a surprisingly serene oasis in the middle of this tourist trap area. Not too many folks had ventured back there that afternoon and there was vintage and modern jazz on the soundspeakers.

Once you pass the tikis standing sentinel at the bar’s entrance, you’ll find a thatched hut bar in the center of the room manned by a bartender in a Hawaiian shirt.

My expectations had been quite low so I was a bit surprised to see that the decor was actually pretty decent, with tapa print and bamboo on the walls, fish float and pufferfish lanterns, and prints of Eugene Savage’s Hawaii-inspired art. These were featured on the menus for the Matson Lines steamships traveling from the West Coast to Hawaii in the late 1940s. (You might also recognize them from the Royal Hawaiian Hotel — or that “Mad Men” episode filmed there. 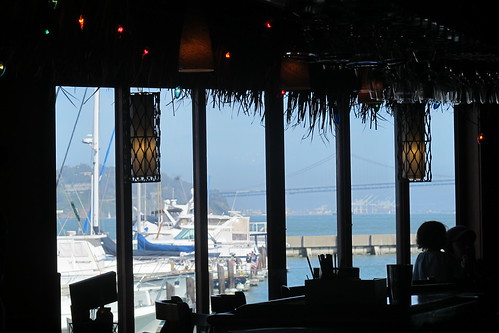 To top it all off, there are fantastic views of Alcatraz and the bay from pretty much every seat in the house. 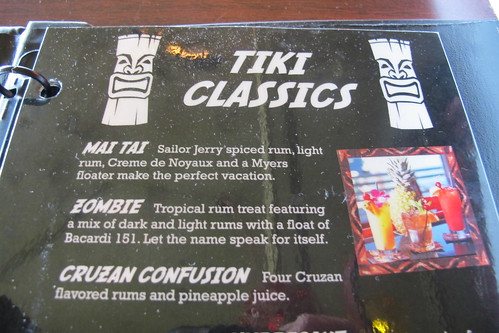 But then things took a turn for the worse when I opened the cocktail menu. Granted, most places that serve Mai Tais don’t make them the way Trader Vic intended, but to call these “Tiki Classics” is too much.

At least they delivered the Mai Tai ($11) in a tiki glass, though. We also had to order the appropriately named Cruzan Confusion ($11) because it sounded like such an abomination of a beverage. Made with pineapple juice and four flavored Cruzan rums, it reminded me of those “suicide” fountain drinks we’d make as kids by mixing all the different sodas together.

Normally I wouldn’t advocate drinking beer at a tiki bar, but here that may be your best bet. There are about a dozen options on draft, including local brews like Anchor Steam ($6) and a few rotating seasonal taps.

With so many great tiki bars in the San Francisco/Bay Area (Smuggler’s Cove, Tonga Room, Trader Vic’s, Forbidden Island), I can’t honestly recommend going out of your way for the Luau Lounge at Players Sports Grill. However, if you’re already at Fisherman’s Wharf anyway, you could do worse!