The venerable Ms. Virbila in her Los Angeles Times review called Luau “the most sedate tiki lounge ever” and I can see what she meant—the quasi-fine dining atmosphere put a bit of a damper on the hedonistic tendencies that tiki spots can bring out.

The space was smaller than I expected but I thought it was lovely. 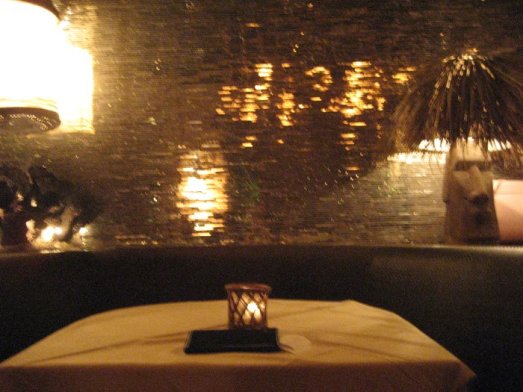 Soft light from the pufferfish lanterns reflects off the mirror shard-studded wall and it’s all dark and kind of romantic, but also a bit spooky at the same time with the slow, plodding island xylophone music pumped in.

(E.T.A. And there you have my first impression of exotica music before I even knew what it was…)

Drinks were small and expensive, but potent. And because I’m a budding tiki nerd (er, enthusiast), I had fun comparing the cocktail menu to the original Luau one posted online at Arkiva Tropika. I had the Luau Coconut ($16), which was of course served in the aforementioned item. However, it was a “new coconut” and thus without the shell it seemed kind of naked (and slightly squishy). The coconut milk/rum concoction inside was tasty, but it seemed like I only got a few sips because it was mostly filled with crushed ice.

Our waitress said there wasn’t a pupu platter per se, but that you could kind of design your own with four picks from the “classic” pupus, not with any of the “nouvelle” ones though. We decided to save room for dessert and went straight for the mains. The soy-glazed Chilean sea bass ($35 for 8 oz.) was delectable, but the few accompanying pieces of garlic bok choy were bland. The NY steak ($44) was served already cut up into pieces and came with two sauces and a side of taro root fries (yum!). However, I think Mr. Baseball was more impressed with the above pufferfish lanterns than he was with his steak.

The pineapple upside down “chaos” ($13) was more like a pineapple upside down minor scuffle. It had the consistency of a pound cake and wasn’t very caramelized on top. Slopped next to it was a spiced applesauce that we didn’t like. Maybe the key lime pie tart with macadamia nut crust would be more promising? Perhaps I’ll find out next time…

8/17/09 Update: Well, it seems like Luau is now closed. A couple weeks I had called and their voicemail had said it was temporary and in the interim recommended diners to Mako and Robata-ya (both from Luau’s chef Mako Tanaka). Bummer, as Luau had tried to beat the recession blues (and lure in more price-conscious folks) with a Sunday night Chinese prix-fixe supper and Dow Jones drink that I didn’t get to try. 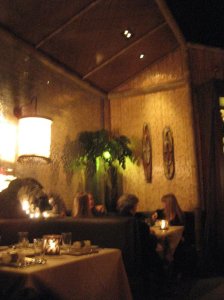