The carb-crazy restaurant Breadbar in Century City has been hosting a bunch of pop-up foodie events over the past year, including the “Hatchi Mix” series where mixologists concoct a one-night-only selection of eight cocktails priced at $8 each.

Each of these nights features a theme/liquor/bar, and in June it was “Rum Amok” with Joel Black from Caña Rum Bar in downtown LA. I wanted to try something not normally offered there, so I ordered the Blood & White Sand, which was made with white rum, pineapple, Cherry Heering, Carpano Antica Formula Sweet Vermouth and The Bitter Truth lemon bitters.

Also not part of the regular menu were four “mixo” pizzas, again $8 each. The mushroom, asparagus, caramelized onion and blue cheese pie made me swoon. My buddy got the kale, fennel and ricotta cheese one and it was also delicious. They really need to serve these all the time!

I knew my dining companion would be intrigued by the Bellini Le Fleur: Luksusowa vodka, lavender peach purée, and lemon verbena oil, topped with Champagne. A unique, less sweet version of the brunchtime staple. 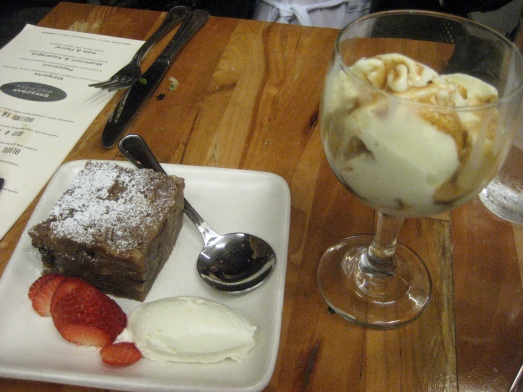 Breadbar’s desserts sounded too tempting to resist, and the chocolate bread pudding and affogato (vanilla ice cream topped with espresso) were both wonderfully indulgent.

I found it amusing that when I asked for the Mai Tai, the server felt she had to warn me that this wouldn’t be your popular orange/pineapple juice affair. I told her I definitely wanted the real deal. Black’s recipe featured Neisson Eleve Sous Bois, Appleton 12 year aged Jamaican rum, lime, orgeat and curaçao. After such a promising preview, I’m excited to go try these cocktails in their natural habitat.