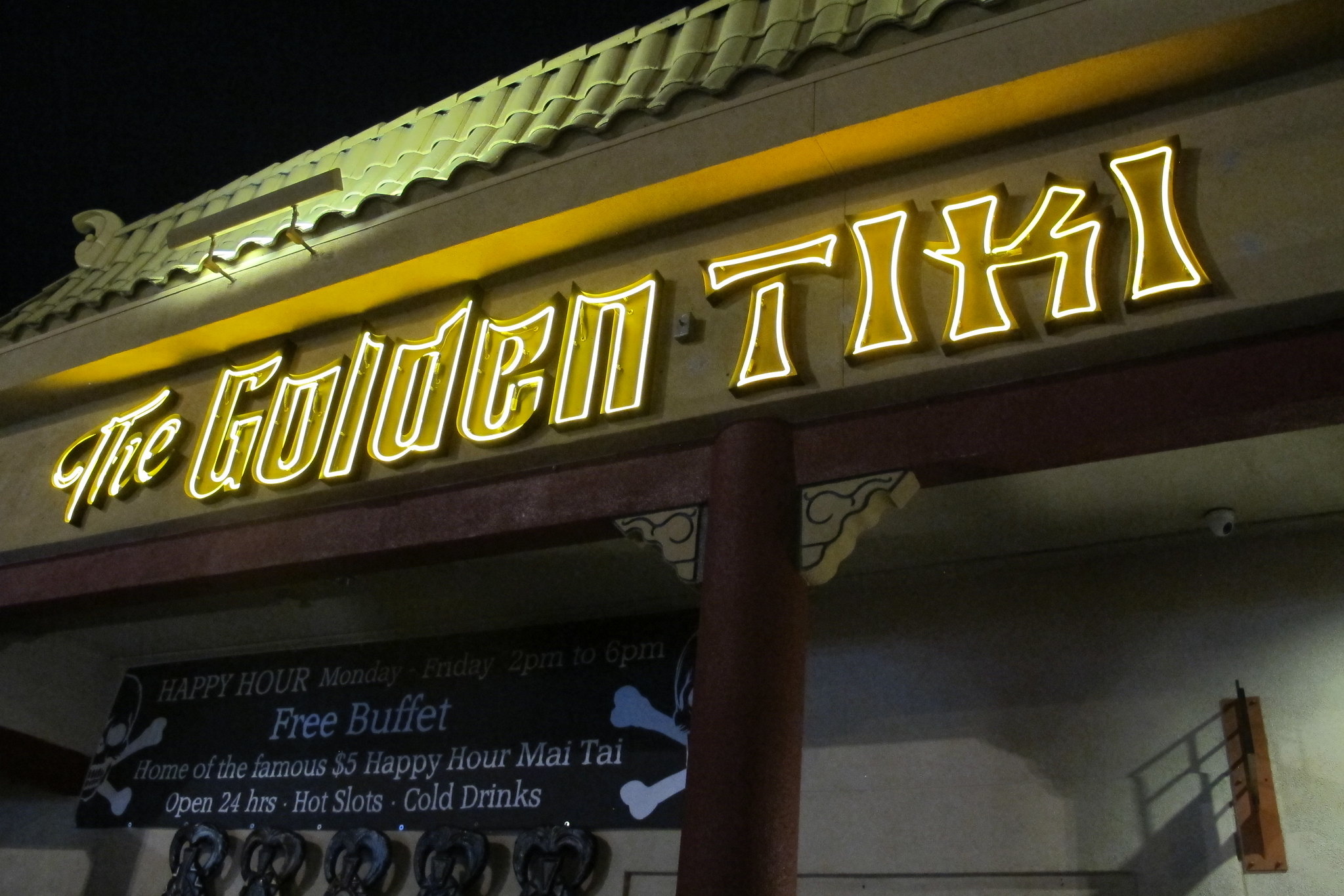 With its rum-spiked Dole Whip and profanity-spouting animatronic skeleton, The Golden Tiki in Las Vegas is like Disneyland designed for adults. It’s even sprinkled with tributes to (and/or props from) Walt Disney’s Enchanted Tiki Room, Indiana Jones, Jungle Cruise, Pirates of the Caribbean and Haunted Mansion. 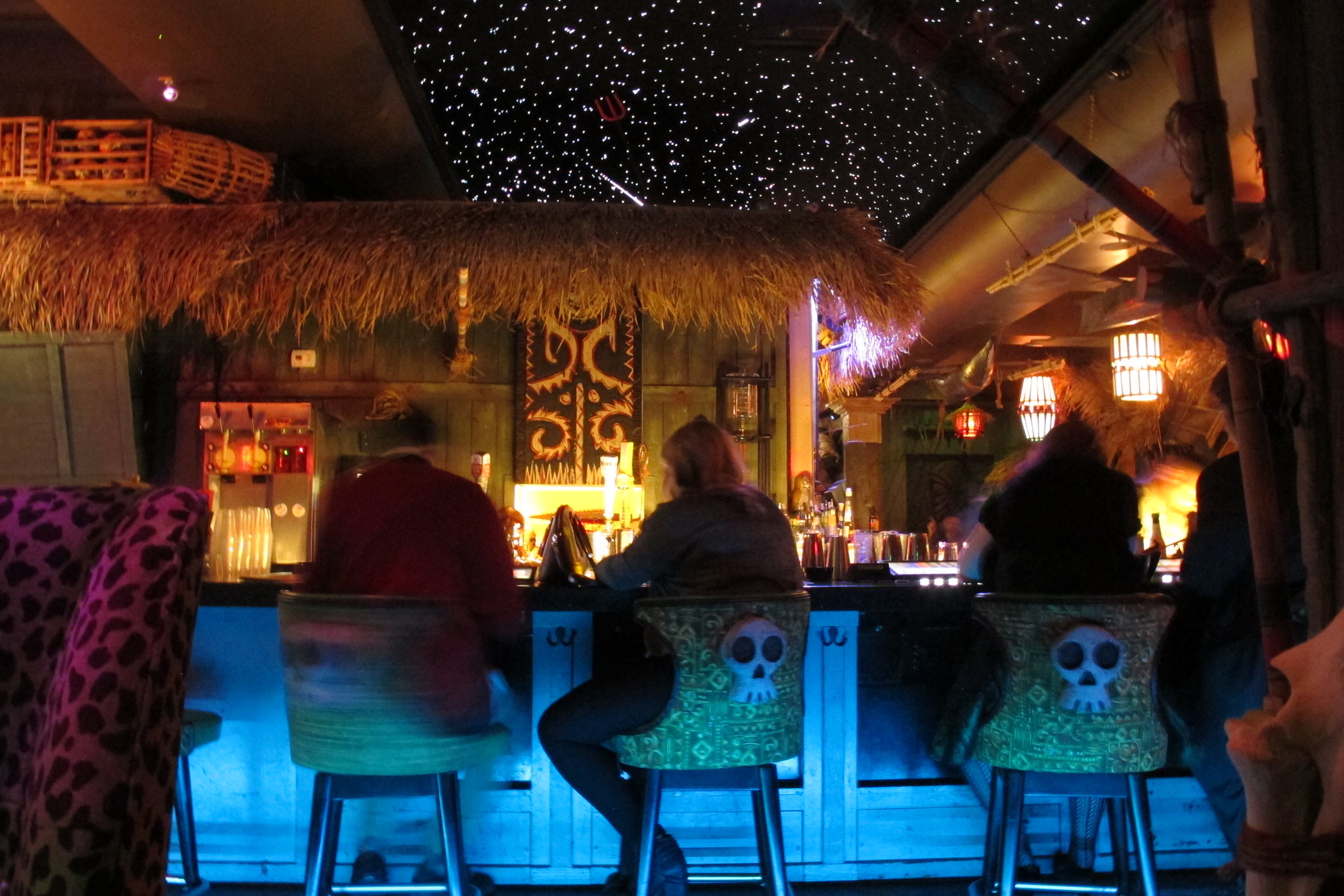 The driving force behind this tiki bar, which opened in August 2015, was Vegas marketing and nightlife impresario Branden Powers. (Back in the ’90s in San Diego, he spun exotica tunes for weekly events at the Hanalei Hotel’s Islands Restaurant, before it was gutted.)

The Golden Tiki is sandwiched in a seemingly endless strip mall called The Center at Spring Mountain in Chinatown, which is only a couple miles west of The Strip. The fantastic décor was masterminded by Tiki Diablo, whose previous projects include the Tonga Hut Palm Springs (and its secret tiki room) and Mission Tiki Drive-in Theater in Montclair. Billy the Crud devoted half a year to making masks, carvings and more for the bar.

After entering through a lava rock cave serenaded by the familiar refrain of “Yo ho, yo ho, a pirates life for me,” you’ll find yourself next to a trading outpost (future souvenir stand) stocked with curiosities like The Chachapoyan Fertility Idol. 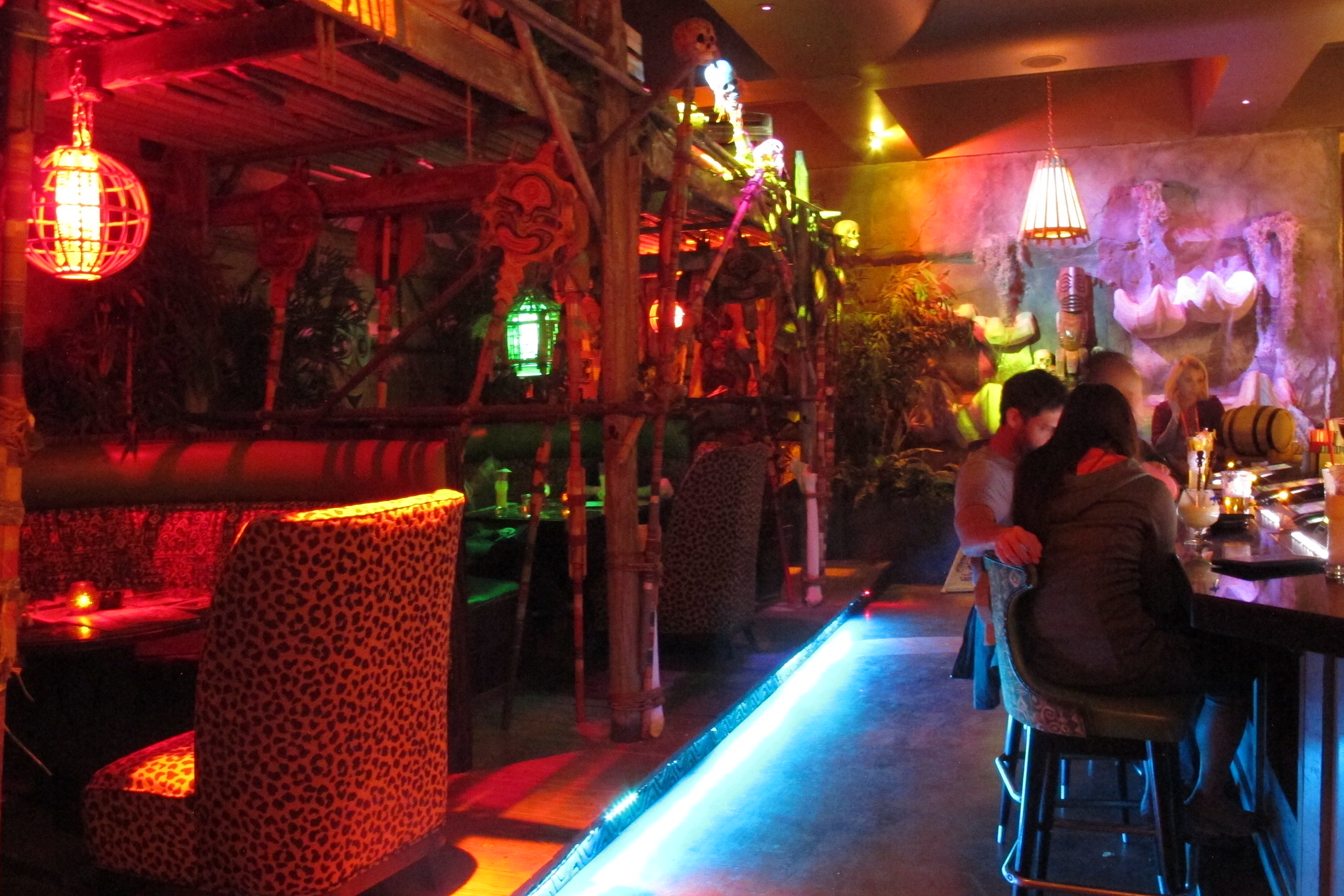 The design incorporates the legend of the Golden Tiki, which you can read on the back of the menu (or on the website). It’s the story of Captain William Tobias Faulkner, who flees from vengeful pirates and lands on Skull Island, reputedly populated by Cyclops who melted down treasure in a volcano to make the Golden Tiki. His crew is attacked by inhospitable natives, as represented by the “Headhunter Village” on the left. Three booths, each able to sit at least six, are adorned with skulls, spears and other weapons, as well as masks from Oceanic Arts, the famed tropical warehouse in Southern California.

Along the wall is a shell waterfall reminiscent of the one from the aforementioned Hanalei Hotel. Meanwhile, the backs of the bar chairs feature Bosko carvings that correspond to each area’s theme (skulls, cyclops or seahorses). If you walk straight in instead, you’ll find tall tables along the wall below A-frames and custom black velvet paintings that also illustrate this backstory. Behind the bar is a large thatched hut with a tiki drummer from the Enchanted Tiki Room perched on top. You’ll also notice the illuminated face of “Goldy,” an animated special effect contributed by “Irk” Hedman. A faux night sky stretches over all this space with twinkling LED stars and bursts of fireworks.

(I hear there used to be TVs behind the bar, so I was happy to see that they’ve since been cleverly concealed…though there is still one remaining screen on the rear wall next to the DJ booth.) 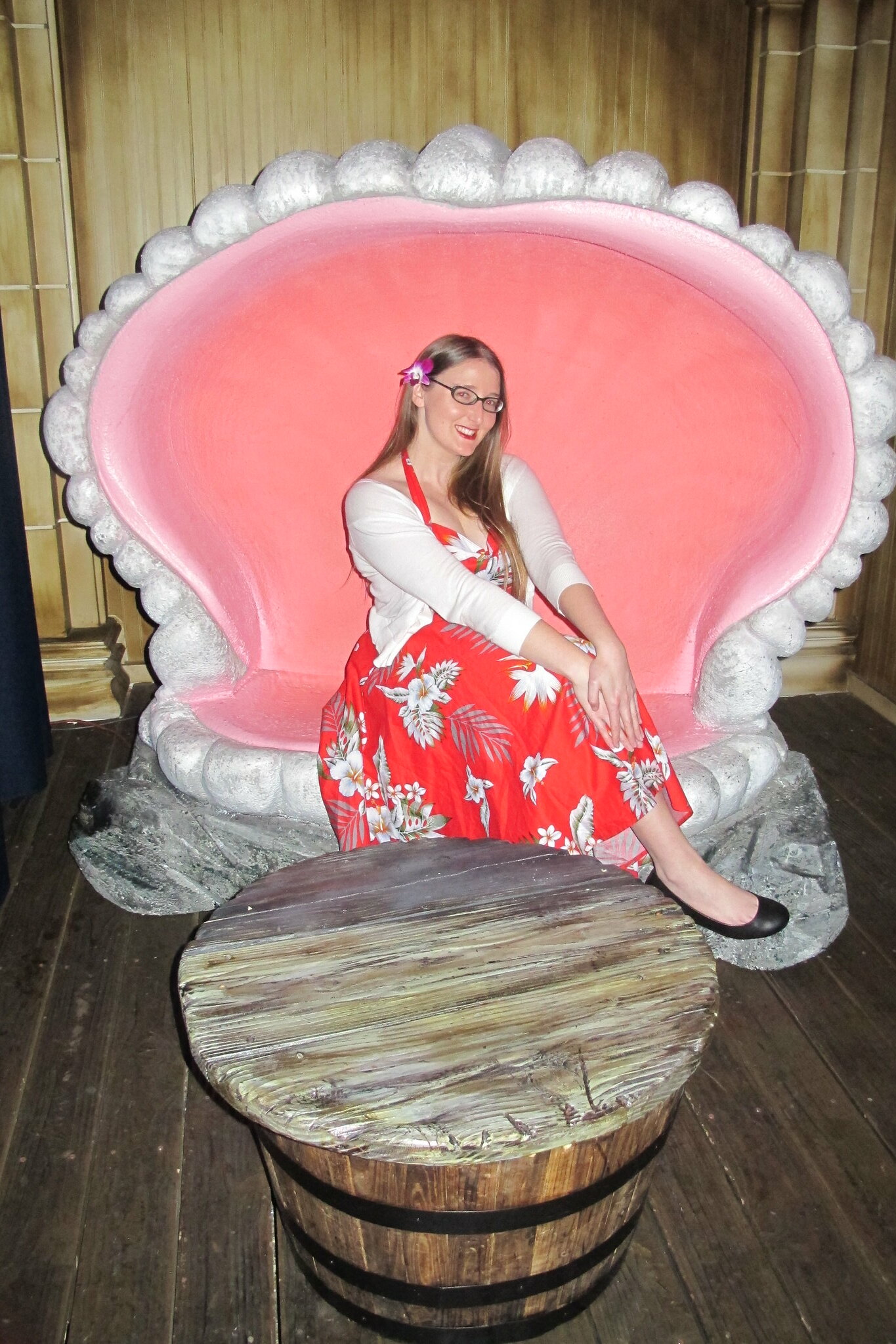 The tale continues with the Captain being saved by seductive sirens. “Mermaid Cove” is portrayed by this giant pink clamshell bathed in a fluid lighting effect to illustrate the “Diamond Falls” (where Faulkner discovers and steals the Golden Tiki). It’s a popular spot to pose for photos, so I had to continue the tradition.

This corner has a small raised platform where live bands occasionally perform. (The Golden Tiki has been open for less than a year, but they are already looking to expand into the space next door to create the “Cyclops Burial Ground” and a larger stage.) Finally, you’ll reach the “Pirate’s Lair.” Moored in the middle of the room is a ship with the skeleton of Faulkner, who wasted away gazing in wonder at the Golden Tiki. Periodically, he comes to life and regales those seated on the surrounding banquettes. (I guess dead men do tell tales…)

Adjacent to this room is the hall of curiosity (also the corridor to the restrooms). It’s worth a wander even if you’re not in need of the facilities. Dole Whip, that frosty pineapple treat people line up for at the Enchanted Tiki Room, can be ordered on its own for $6, as a float with pineapple juice for $9 or with Coruba dark rum for $11. Dole Whip even makes its way into some of the drinks, like the Banana Batida (left) and The Painkiller (middle), where it stands in for the pineapple juice. Aside from that, they stay faithful to the recipe for this litigious libation with Pusser’s Rum, coconut cream, orange and grated nutmeg on top. Of the drinks we sampled, my favorites were probably the Painkiller and the Kokonut Sunrise (left), made with tequila, mezcal, honey syrup, pineapple and homemade grenadine. If you prefer something that’s not as sweet, the Hotel Nacional (middle) may be up your alley. The Honey Mango Java Punch (right) is interesting, though I’m not a huge fan of bringing coffee liqueur into the mix.

Most of the cocktails are priced at $11, but there also are a few bowls (Scorpion and Zombie Punch), Martinique Ti’ Punch prepared tableside from a cart, and the $500 Treasure Chest that comes with a bottle of Veuve Clicquot Champagne and Appleton Estate 12 Year Jamaican Rum (the tiki equivalent of bottle service, I suppose). 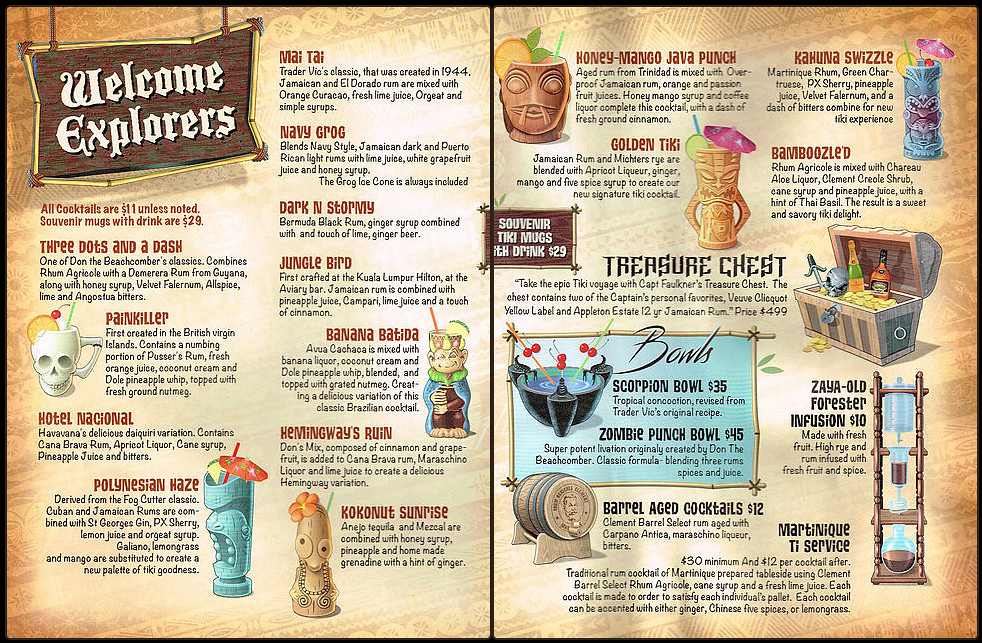 Tiki Farm mugs are available for purchase for $29 (including the drink), but the ones pictured on the menu have since sold out. Instead, they offer some of the other recently released designs, like the Marqo-Coco and Lightning. 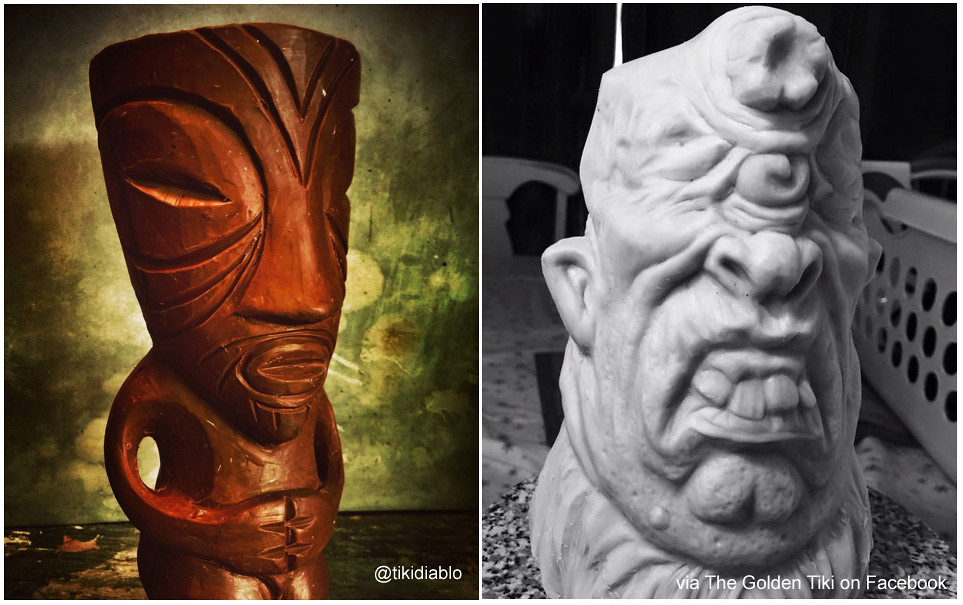 However, The Golden Tiki is working on some unique signature designs for mugs, including one featuring Tiki Diablo’s sculpt of the logo tiki from Doug Horne’s menu cover art, as well as a Cyclops sipper from Tom Thordarson (aka Thor). The former should be available in March. In true Las Vegas style, The Golden Tiki is open 24 hours (same as Frankie’s Tiki Room, the other must-visit tiki bar in town). Food isn’t served here except during happy hour (Monday through Friday 2 p.m.-6 p.m.) when there is a free mini-buffet of Chinese food (chicken wings, egg rolls, potstickers), plus $5 Mai Tais and $1 off all drinks. (The drink specials are also available weeknights from 4 a.m.-8 a.m.)

Check out their Facebook page for a heads up on DJs (cover charges sometimes apply after 8 p.m.), live music, burlesque shows, etc.