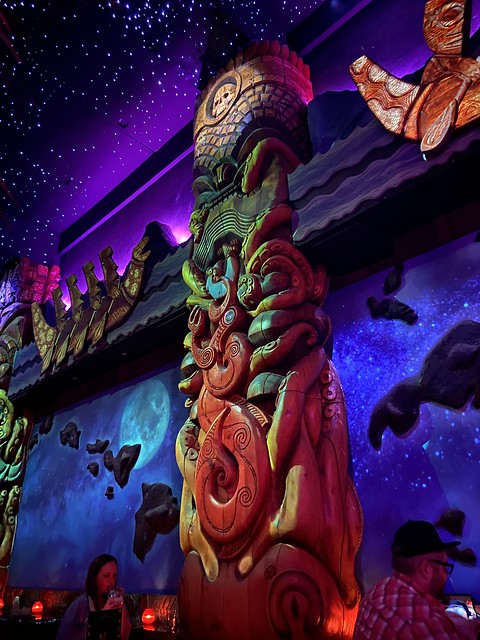 I’ve heard San Francisco described as the American capital of Tiki — and though I’m L.A. biased I might be starting to agree. The Bay Area has long been home to some fantastic tiki bars, but a slew of new destinations have sprouted up in the past few years, including Pagan Idol, The Kon-Tiki (formerly Longitude in Oakland), Last Rites and, most recently, Zombie Village. 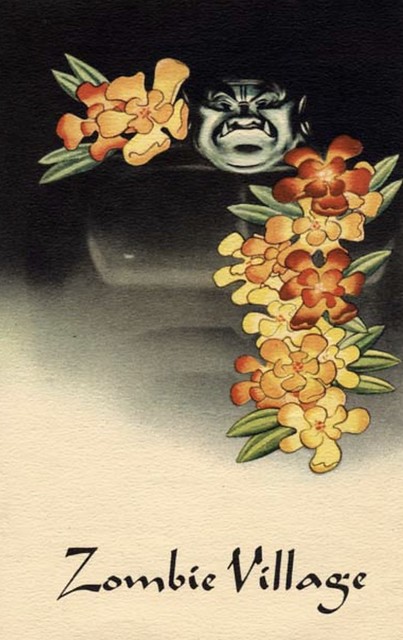 Don the Beachcomber and Trader Vic have been the inspiration for countless tiki bars, but Zombie Village pays tribute to a less famous name (to me, anyway). Frank “Skipper” Kent was a “traveler, lecturer, explorer, yachtsman and cinematographer,” as described on one of the original menus. While some other restaurateurs of this era embellished their personal legends, he was actually the real deal. He sailed all over the world collecting “authentic decorations and curios” that were eventually displayed in his two establishments: Skipper Kent’s in San Francisco and Skipper Kent’s Zombie Village in Oakland. He opened the latter in 1942 and it served as an escapist paradise for 25 years until it was destroyedby fire in 1967. (Naturally, Tiki Central has a very informative thread on its history.) 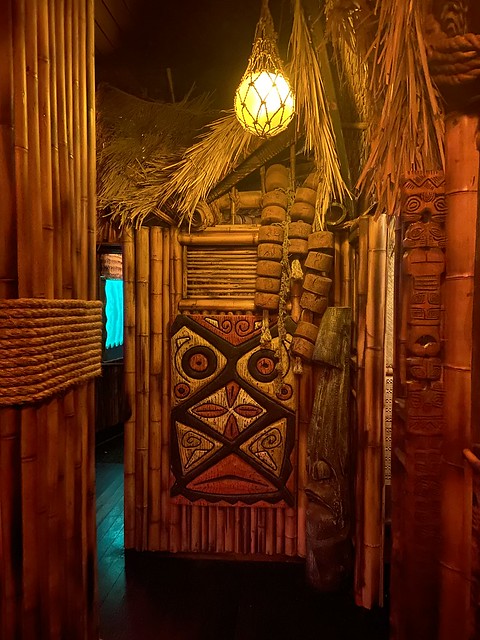 Now, back to present day! This Zombie Village is a project from Future Bars group, which for more than a decade has created SF nightlife destinations with vintage flair, such as nearby speakeasy Bourbon & Branch (established 2006). It makes sense that eventually they would bring that immersive spirit and passion for craft cocktails to tiki bars. Owner Brian Sheehy and beverage director (now GM) Daniel “Doc” Parks debuted Pagan Idol in 2016 and then Zombie Village with an official opening in January 2019. 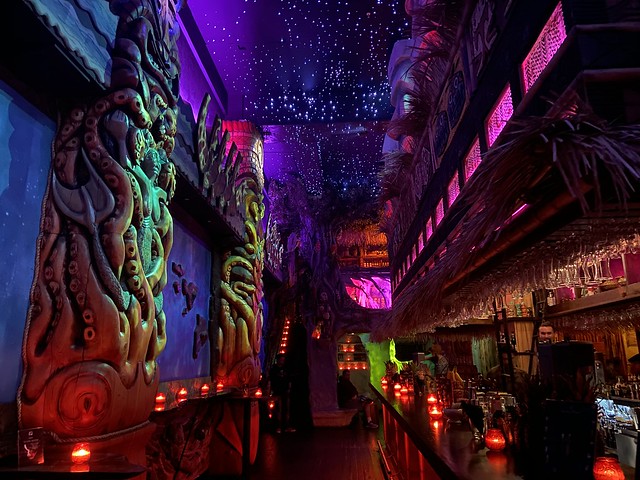 My jaw dropped when we walked in. I’d seen a few pictures but it was even more stunning in person. The starry night sky and groovy projections on the wall and tikis bring such a unique vibe, sort of psychedelic. Every so often you’ll hear thunder crash and see a lightning bolt flicker across the wall. 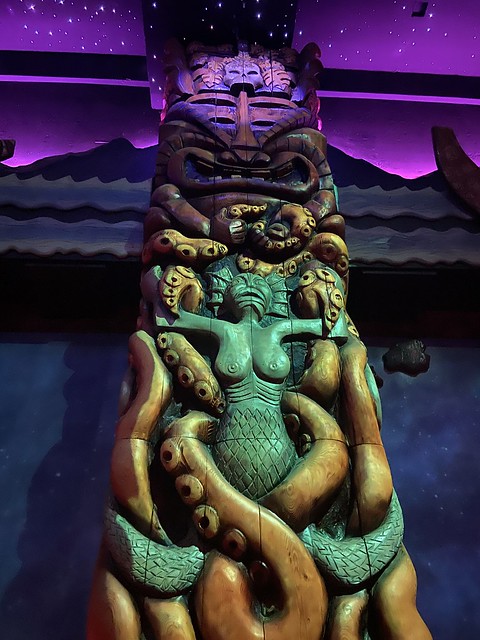 Artist Ivan Lee Mora collaborated with Future Bars on the design andfabrication of Pagan Idol and again with Zombie Village. He made this massive tiki and fish goddess (Crazy Al carved its counterpart), along with the Moai perched on top of the bar and much more. On top of that there are custom pieces from Bosko (carved panels on the bar), Woody Miller (maps of the Caribbean and Polynesia, plus other carvings), Mikel “MP” Parton (Tiki Bob velvet painting and menu cover art that’s also featured on the website) and Marc Atkinson (Aku-Aku painting). 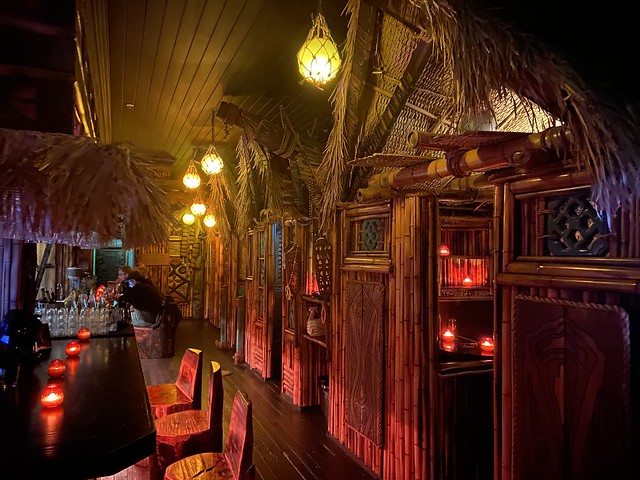 They also brought in Bamboo Ben, the famed fabricator of Strong Water, Clifton’s Pacific Seas, Frankie’s Tiki Room and many other incredible tiki bars. He built out the thatched A-frame huts that line one wall of the space. These private hideaways can be reserved on Yelp for groups of two up to ten people. 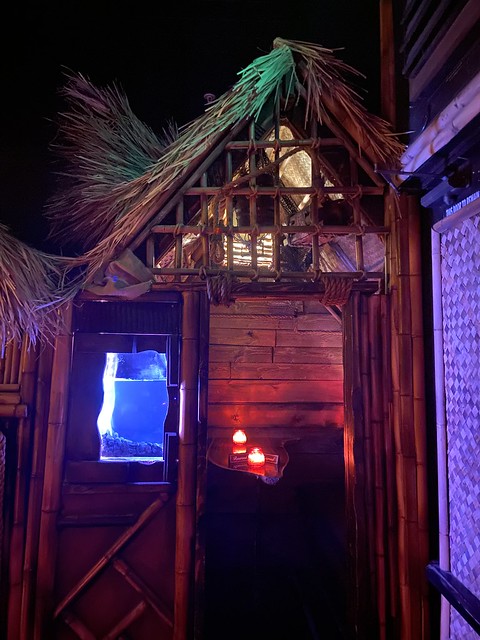 Each of the eight huts pays tribute to historic tiki bars with their decor: the original Zombie Village in Oakland, the Aku-Aku in Las Vegas, Luau in Beverly Hills, Tiki Bob’s in San Francisco (with a black velvet painting of its iconic mug), The Mai-Kai in Fort Lauderdale (my all-time favorite still going strong), Don the Beachcomber in Hollywood, Trader Vic’s and, finally, Bahooka pictured here. Note the nautical vibe with the wood planks and empty fish tank, which once had a carrot in it in honor of Ruffus. Huge shout-out to Rob for showing me around and pointing out all these fun details. 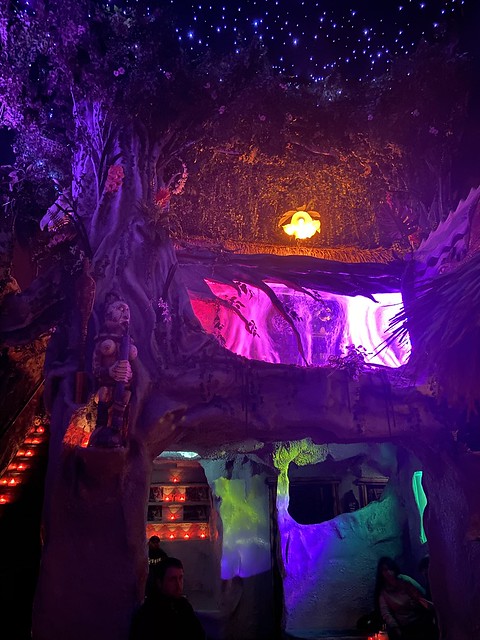 If you don’t manage to get a reservation for one of the huts, there are some bar stools around two corners of the central bar. Open seating is also available in the candlelit grotto — look closely and you’ll spot the “fossilized” impression of tentacles from a fearsome creature of the deep. There’s also plenty of standing room at the drink rail along the wall. 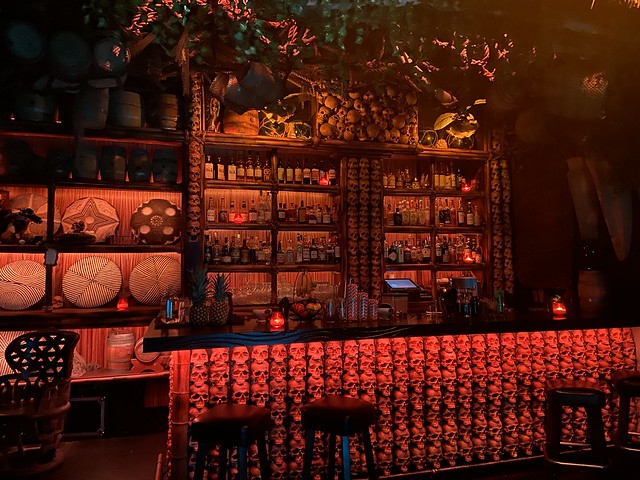 A staircase ascends next to the gnarled roots of a banyan tree upstairs to Doc’s Voodoo Bar, which opens up on busy weekend nights or for private parties. It’s festooned with tropical foliage and vines overhead and a catacomb’s worth of skulls on the bar. 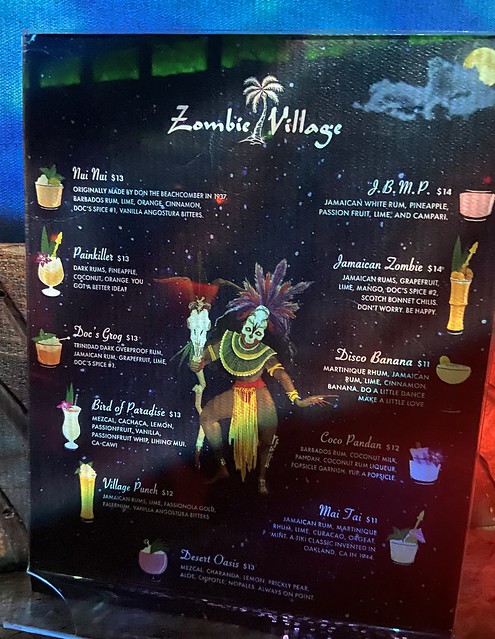 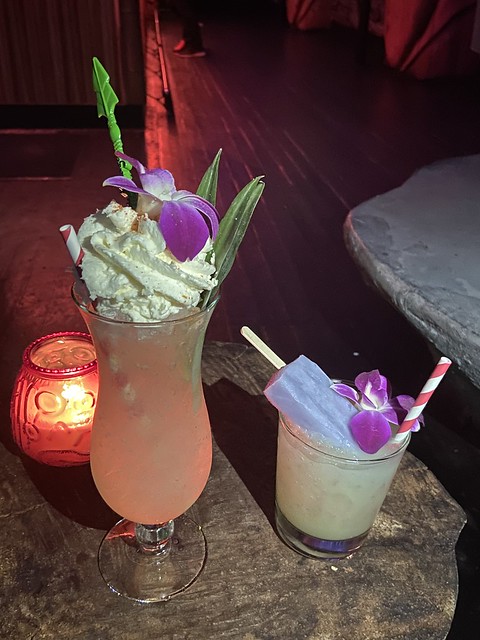 The Bird of Paradise ($13, mezcal, cachaca, lemon, passion fruit, vanilla) had a bold smoky flavor that could be tempered by the tart sweetness of the passionfruit whip and the tangy li hing mui (salty dried plum powder) dusted on top.

The Coconut Pandan ($12) blends two flavors often found in Southeast Asian cuisine, the latter derived from the leaves of a tropical plant. (I first tried this nutty flavor in a tiki drink a few years ago in the Pandan Painkiller at Three Dots and a Dash in Chicago.) This drink featured Barbados rum, coconut milk, pandan and coconut rum liqueurs, plus a lychee and coconut popsicle that is a delicious bonus. 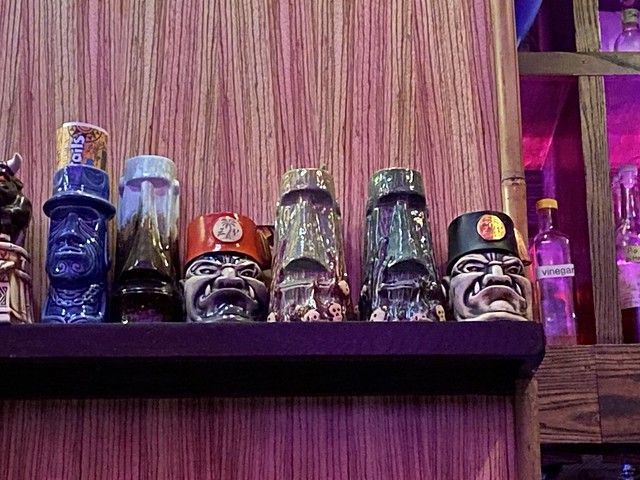 On a shelf behind the bar you can spot the limited edition tiki mugs that have been designed for the bar so far (along with ceramics from other tiki bars). There’s the Moai Mug by Woody Miller and Zombie Village mug by Eekum Bookum (inspired by the glowering genie-like figure that appeared on the menu covers of the original Zombie Village.) For their recent first anniversary they released a new glaze (with a black and gold fez) and on my visit last month there were still a few available to purchase at the bar for $120. (If you’re looking for a cheaper souvenir, don’t forget to take the cool custom swizzle stick from your drink.) 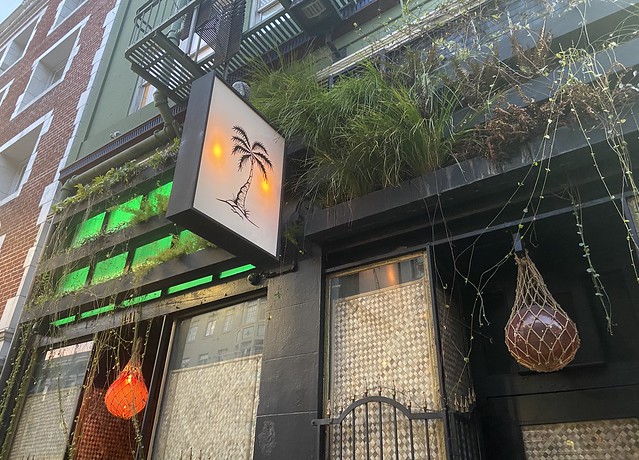 Zombie Village is open Monday through Friday 5 p.m.-2 a.m. and Saturday 6 p.m.-2 a.m. (closed Sundays). It’s located in the Tenderloin District, not the most savory of neighborhoods but don’t let that deter you. (Their Instagram has recommended tourists that walk over to come down Jones from O’Farrell instead of up from Ellis.) It’s just a short rideshare trip away from sister spot Pagan Idol, or you could head over to Smuggler’s Cove or the Tonga Room….but you just might fall under the spell of Zombie Village and make an evening of it. 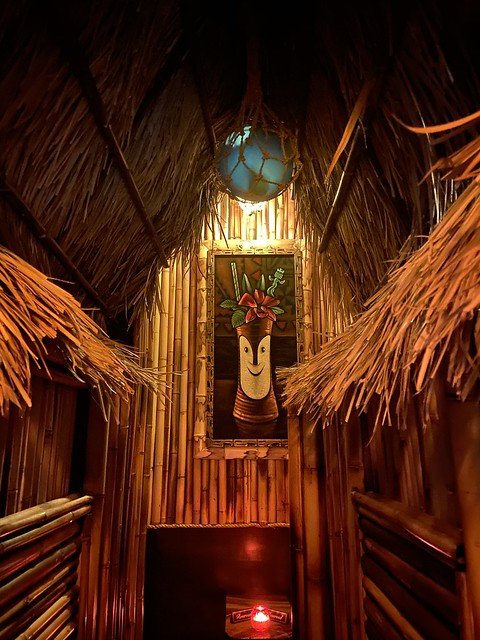