Even with the dreaded “Carmageddon” happening over the weekend, there was no way I was going to miss the annual Tiki Night at the Egyptian Theatre in Hollywood. We were prepared to take the subway (free that weekend!), but the gridlock warning turned out to be a bust so we did the typical Angeleno thing and drove instead.

Ukulele Dave kicked things off with some lovely Hawaiian melodies and there were tempting things to buy from tiki vendors like Eric October.

King Kukulele and the Friki Tikis even had a special song written for Carmageddon, to the tune of “Viva Las Vegas.” Their little band of hecklers really adds to the show, kind of like Martin and Lewis.

This year’s format was different than previous events. The catered picnic-style dinner was out and guests were encouraged to order from Maui and Sons, a surfwear-inspired restaurant that opened in the courtyard earlier this year.

I’ll give them the benefit of the doubt that they ran out of proper glassware and don’t normally serve non-beer beverages in Dos Equis glasses.

Also new for this year was a “tiki fashion show” featuring the costumes of the Polynesian Paradise Dancers. 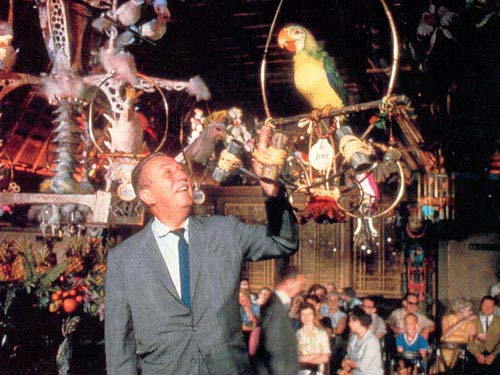 Richard Sherman, the composer of The Enchanted Tiki Room theme song, was supposed to be at the event but apparently there was a scheduling conflict. Instead, the show started with a tribute to Wally Boag, who provided the voice for Jose and wrote most of the script for the attraction.

He also performed as Pecos Bill in literally thousands of shows with Betty Taylor at Disneyland’s Golden Horseshoe stage, and Steve Martin credits him as an early comedic inspiration. We watched part of this very entertaining clip from a 1962 episode of “The Wonderful World of Disney.” 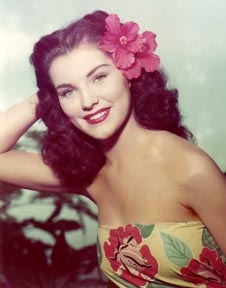 The main event was a screening of “Bird of Paradise” from 1951, a South Seas drama filmed in Hawaii several years before the islands were even a state. Debra Paget is captivating as the Princess Kalua, although she barely says a word, mostly batting her technicolor blue eyes. (Oh, and there were some tikis in the movie, too.) 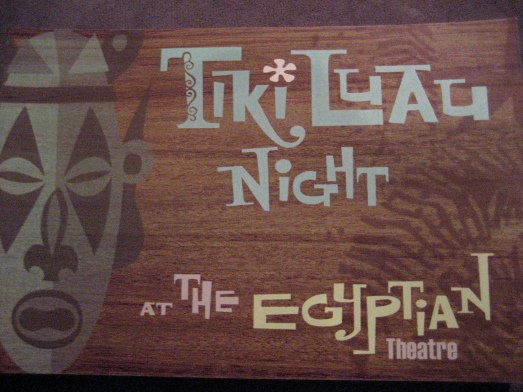 Every summer for the past five years, the American Cinematheque has hosted a Tiki Luau Night at the Egyptian Theatre with an alfresco dinner followed by a tiki-themed film. (Tickets are available for each part separately, but I’d definitely recommend going to both.)

Fun fact courtesy of Wikipedia: The Egyptian Theatre is the older sister of Grauman’s Chinese Theatre, and was the site of the first Hollywood premiere in 1922.

The food was dished out buffet-style in the theater, while the courtyard lent itself for seating, the luau performances, and some shopping opportunities from folks like Eric October. 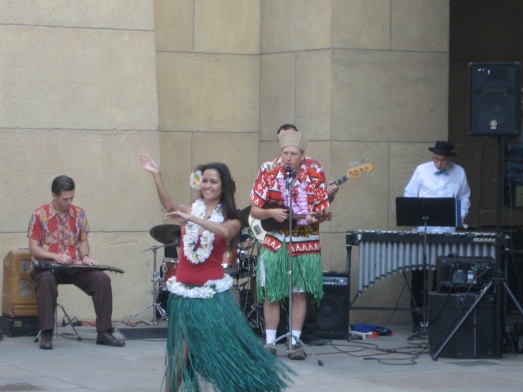 The evening’s house band, King Kukulele and the Friki Tikis were great, and the Polynesian Paradise Dancers accompanied a few tunes. We especially enjoyed hearing “Hi’ilawe”—made us feel like we were in The Enchanted Tiki Room.

A series of short clips from some of the films they’ve shown in the past preceded the main event: a screening of “The Mighty Uke” followed by a Q&A with director Tony Coleman, who flew in from Canada for the occasion.

To be honest, I initially wasn’t all that jazzed about watching a documentary about ukuleles. But all that changed as soon as the film started with a recording of a live concert of virtuoso musician Jake Shimabukuro. He’s ridiculous!

“The Mighty Uke” follows the ukulele’s origins in Portugal and Hawaii to its popularity in America in the 1920s to its subsequent decline as the guitar became the stringed instrument of choice for many.

Now that I think about it, I shouldn’t have been so quick to write off the subject matter, especially considering “Some Like it Hot” is one of my favorite movies, and the most memorable moment from seeing Paul McCartney at the Hollywood Bowl was when he brought out a ukulele to play “Something” as a tribute to George Harrison.

Anyway, along the way we were introduced to musicians like James Hill, who composes classical-style concerti featuring the ukulele, music educators who make the case for replacing elementary schools’ recorders with ukes, and lots of folks who just love to jam. (A bunch of cinema-goers even brought their ukes to do so after the movie!) 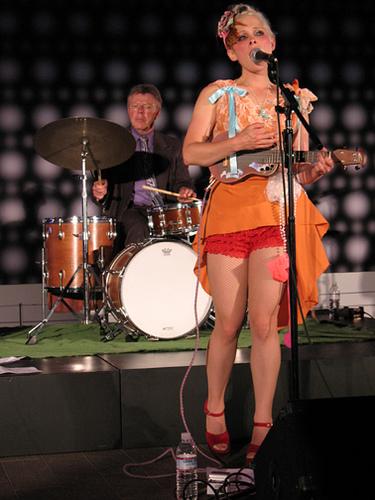 Also making the much maligned instrument look cool was Uni & Her Ukelele, she struck me as an awesome mix of equal parts Lady Gaga and Rainbow Brite. I bet you that after watching “The Mighty Uke” you’ll be tempted to get a ukulele too. (Personally, I’d love this one.)