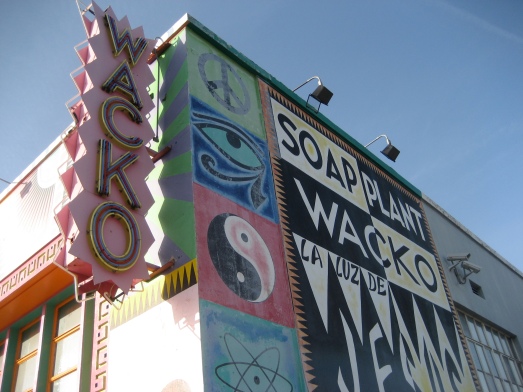 Back in March, La Luz de Jesus gallery in the back of Soap Plant/Wacko in Silver Lake hosted the 13th annual “Everything but the Kitsch ‘N Sync” art show.

The exhibition is not really tied to a theme in particular, but there were some tiki-influenced artists thrown into the mix. Plus you could sit back and take in the art on this Ku bench that’s kind of obscured in my photo.

Surfer/artist/animator Miles Thompson had some beautiful submissions in the show, including “The Harmony in 3s” above. (And according to this interview in Liquid Salt, he’s also a fan of The Palace Grill in Santa Barbara, so he’s definitely ok in my book!) I’m looking forward to seeing his Munktiki mug collaboration at the Tiki-Ti’s 50th anniversary shindig.

Black velvet paintings are the preferred medium for the amazing Heather Watts. (I hope to own one of her works someday.) This piece, “The Decision,” demonstrates her ethereal style. 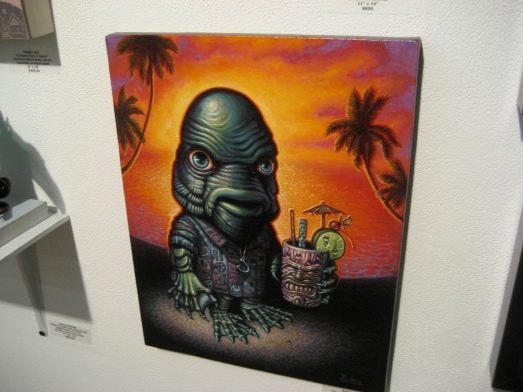 Hawaii-based artist Brad Parker merged the classic Universal movie monsters with tiki style in this series of four paintings collectively called “Monsters on Vacation.” Apparently looking for a change of scenery from The Black Lagoon here is “The Kreature from Kona.”

I just had to post another for good measure, and because I like them so much. “Dracula Drinks…A Mai Tai” is another example of the eye-popping colors and intense detail characteristic of his paintings and prints.